I’m A Celebrity… Get Me Out Of Here! winner Danny Miller has branded the show an ‘absolute nightmare’ in a candid interview with Good Morning Britain.

The Emmerdale star was crowned the first-ever King of the Castle during last night’s finale, beating Coronation Street’s Simon Gregson and The Saturdays singer Frankie Bridge to victory.

Danny opened up on his time on the ITV series as he joined Ranvir Singh and Adil Ray on Monday’s programme, telling them: ‘I’ll be honest with you, it was an absolute nightmare.

‘From start to finish it was tension, it was awful. Luckily for me, I had David Ginola all the way throughout.’

Danny continued: ‘I don’t think you ever really get used to it. Obviously, I’m used to being in front of a camera, but to have a camera recording you all the way throughout, 24 hours a day, seven days a week doesn’t make it any easier.’

After presenters Ant and Dec announced Danny had won the competition last night, he was handed the winner’s sceptre and a floral crown.

Danny Miller was crowned the King of the Castle on Sunday night (Picture: ITV)

‘I mean honestly, from the bottom of my heart and my family’s heart – thank you so much, this is just the best thing that’s ever happened to me, bar my son,’ he exclaimed.

The actor added: ‘I never thought I’d be in this position, I barely thought I’d make it through the first two or three votes or so.’ 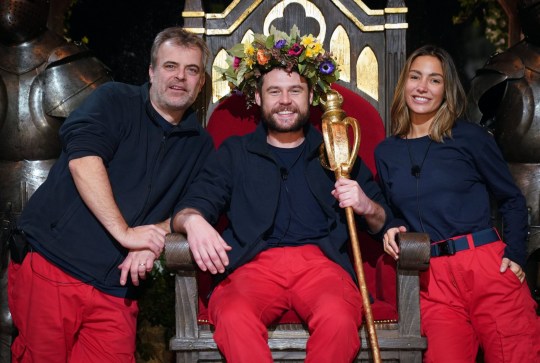 Danny entered the castle three weeks after the birth of his first child, a son called Albert, and told Ant and Dec he had gone on the show to secure his child’s future financially.

He said: ‘I have made no secret about the fact that I wanted to be able to give him and set him up for a good future. I wasn’t financially set for that and this is an opportunity to do that.

‘It would set me and my family up. I feel like I have done it. I feel proud of myself and I hope my family are as well.’

Good Morning Britain airs weekdays at 6am on ITV and I’m A Celebrity… Get Me Out Of Here! is available to stream on ITV Hub.