WHEN Jenny Powell goes out with her 19-year-old daughter Connie, she is often worried about embarrassing her.

That’s because the former Wheel Of Fortune game show host and Loose Women panellist says she is always getting mistaken for her teen’s SISTER — despite their 33-year age gap. 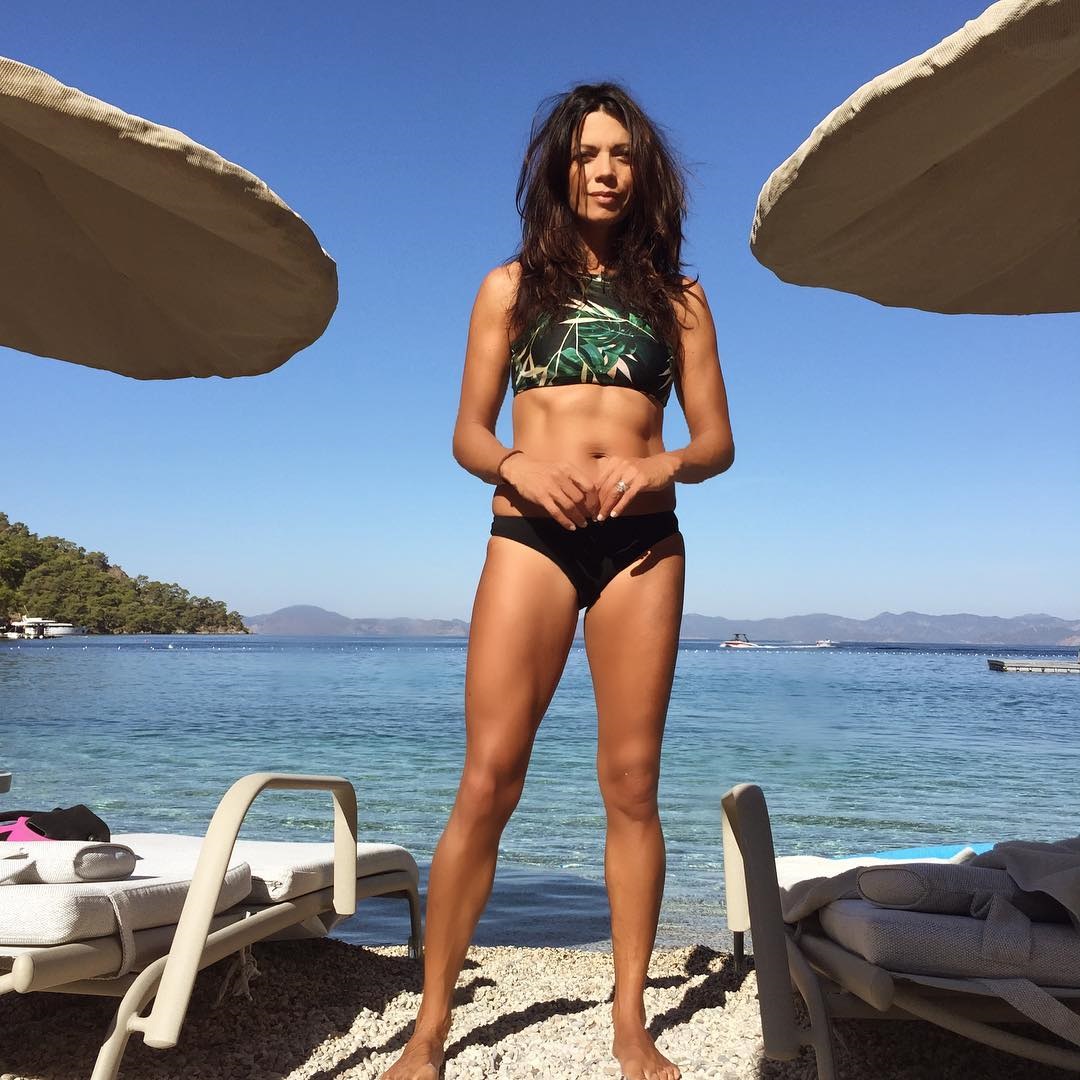 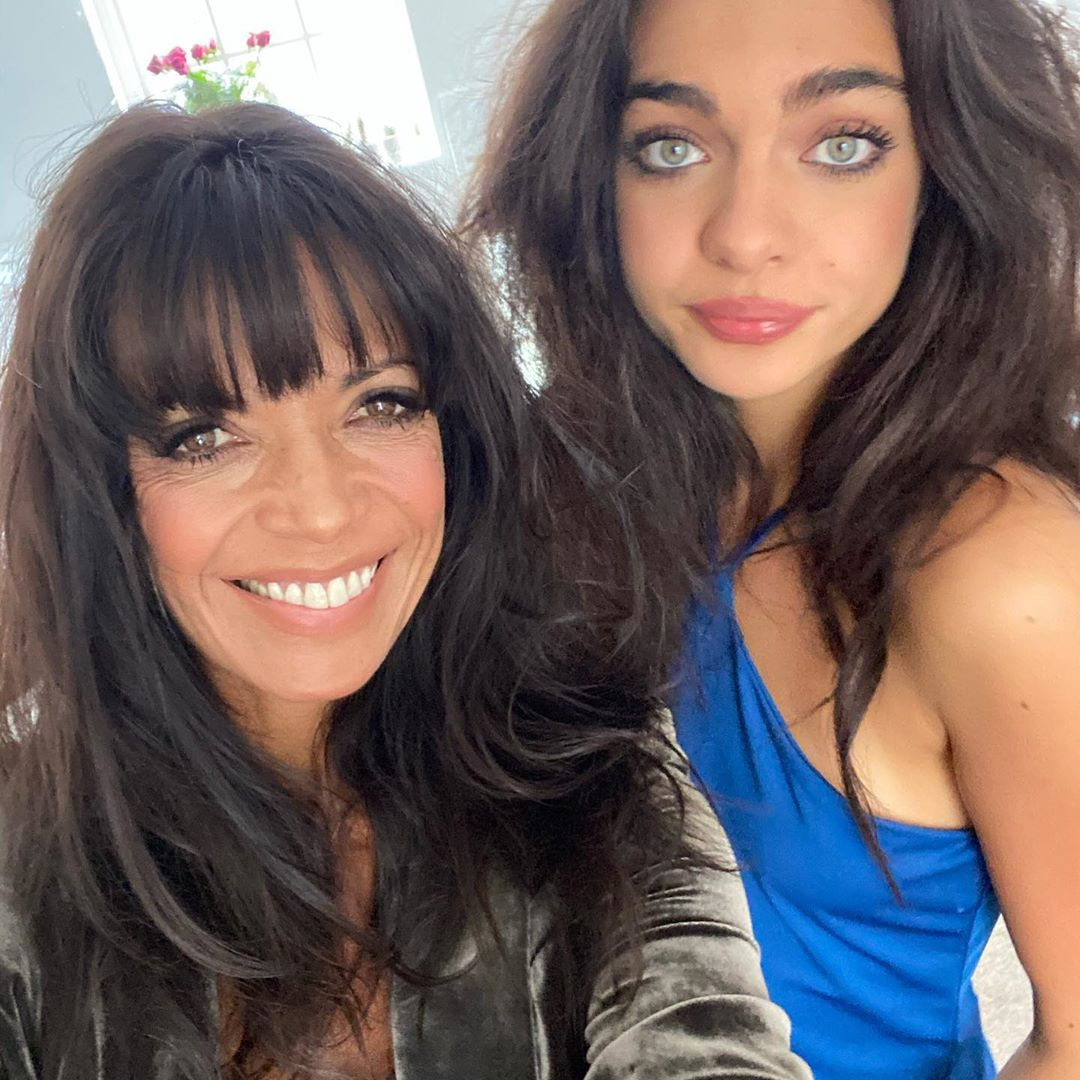 Today Jenny, who looks incredible at 52, tells The Sun on Sunday how she adores the confidence boost, and jokes: “I do get called Benjamin Button — every year I get a bit younger.

“Being called your daughter’s sister is very flattering. We once checked into a hotel on holiday and the guy behind the reception desk said, ‘Oh, look at you two sisters. You look so alike’. Connie said, ‘She’s my mum’. I think she loves it but hates it as well. When she was in the sixth form it was going round the boys that ‘Jenny Powell is a hot mum’.”

Jenny — who is the star of a hit new podcast interview called The Hot Mess Mums Club, where she interviews celebrities about being parents — left Wheel of Fortune almost 20 years ago. In an exclusive interview, she opens up about the heartache of discovering her husband’s affair when she was seven months pregnant and how she met her new fiancé while getting a coffee at a station.

Jenny shot to fame in the late Eighties on kids’ TV show Gimme 5 and Top Of The Pops before making her mark as the “glamorous assistant” to Nicky Campbell and then John Leslie on Wheel Of Fortune from 1995. The ITV quiz programme was watched by more than eight million viewers. 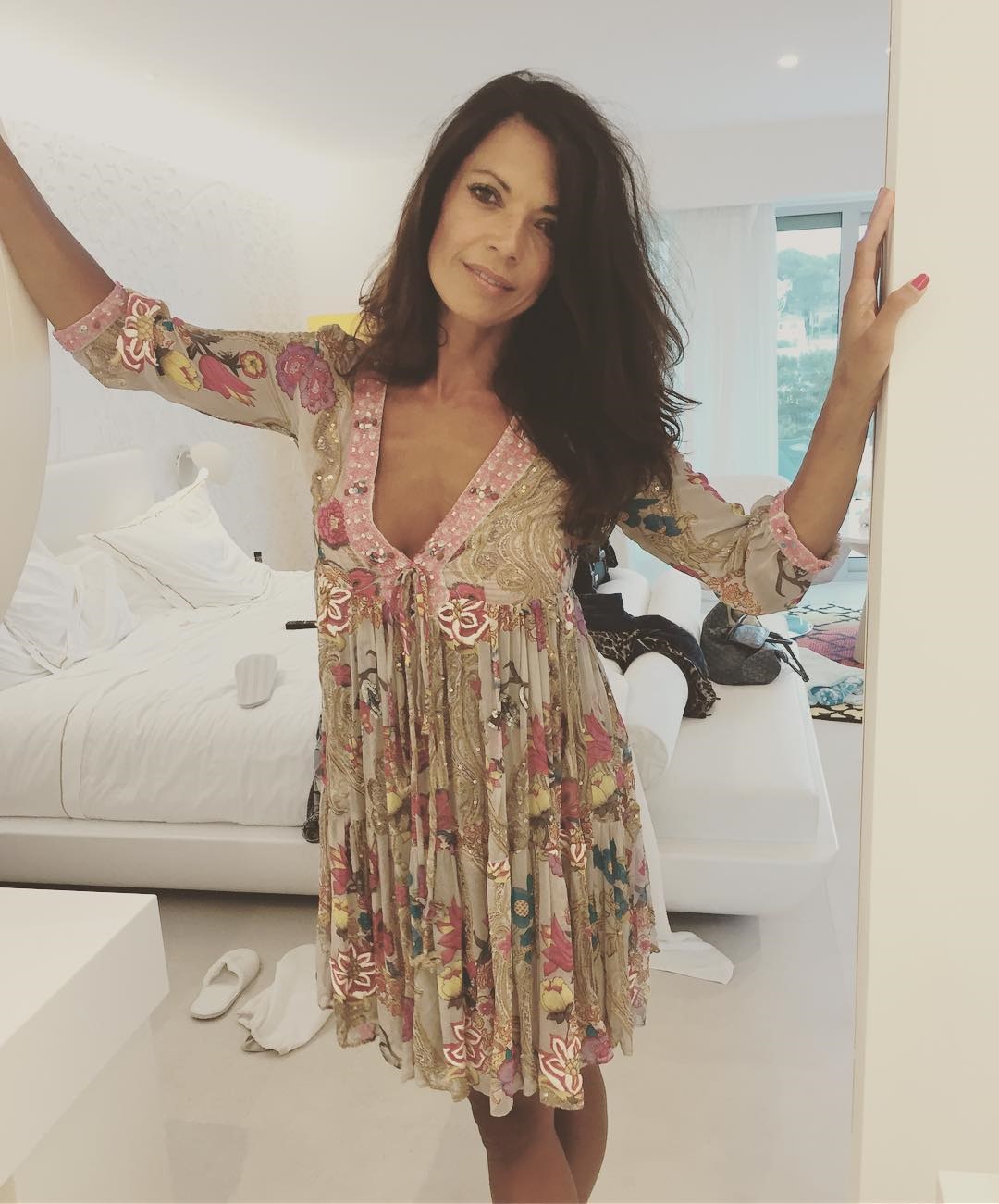 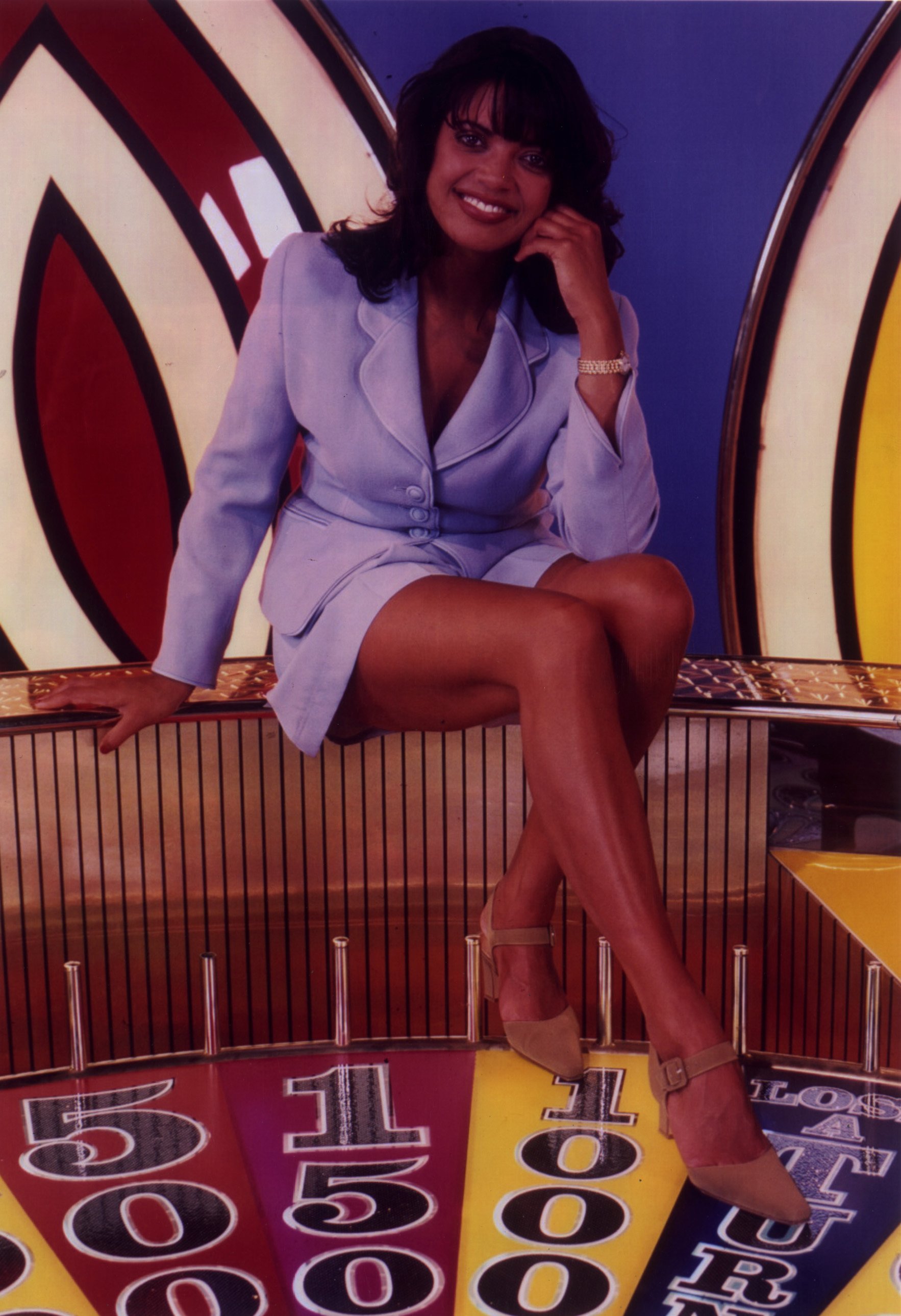 Kiss on lips from Arnie

Last month a jury returned a not guilty verdict after 23 minutes of deliberations at the end of John Leslie’s trial for alleged sexual assault.

Jenny says: “There was no suggestion anything untoward was going on when I worked with him on Wheel Of Fortune. John would come and stay at the house but I never really socialised with people during the week. Overall I struck up a great friendship with John. I never got a whiff of anything else.”

Jenny’s job on music and kids’ morning TV shows introduced her to many stars. In 1987 she dated Bros singer Matt Goss at the height of Brosmania before his then-management closed down the relationship.

She says: “When I was with Matt it was just chaotic young love. At the height of Brosmania I was the one getting smuggled in through the hotel kitchen and up and down the service lifts. Was I hated by loads of 16-year-old girls? Yeah, I think I probably was, but it was all very hush hush. 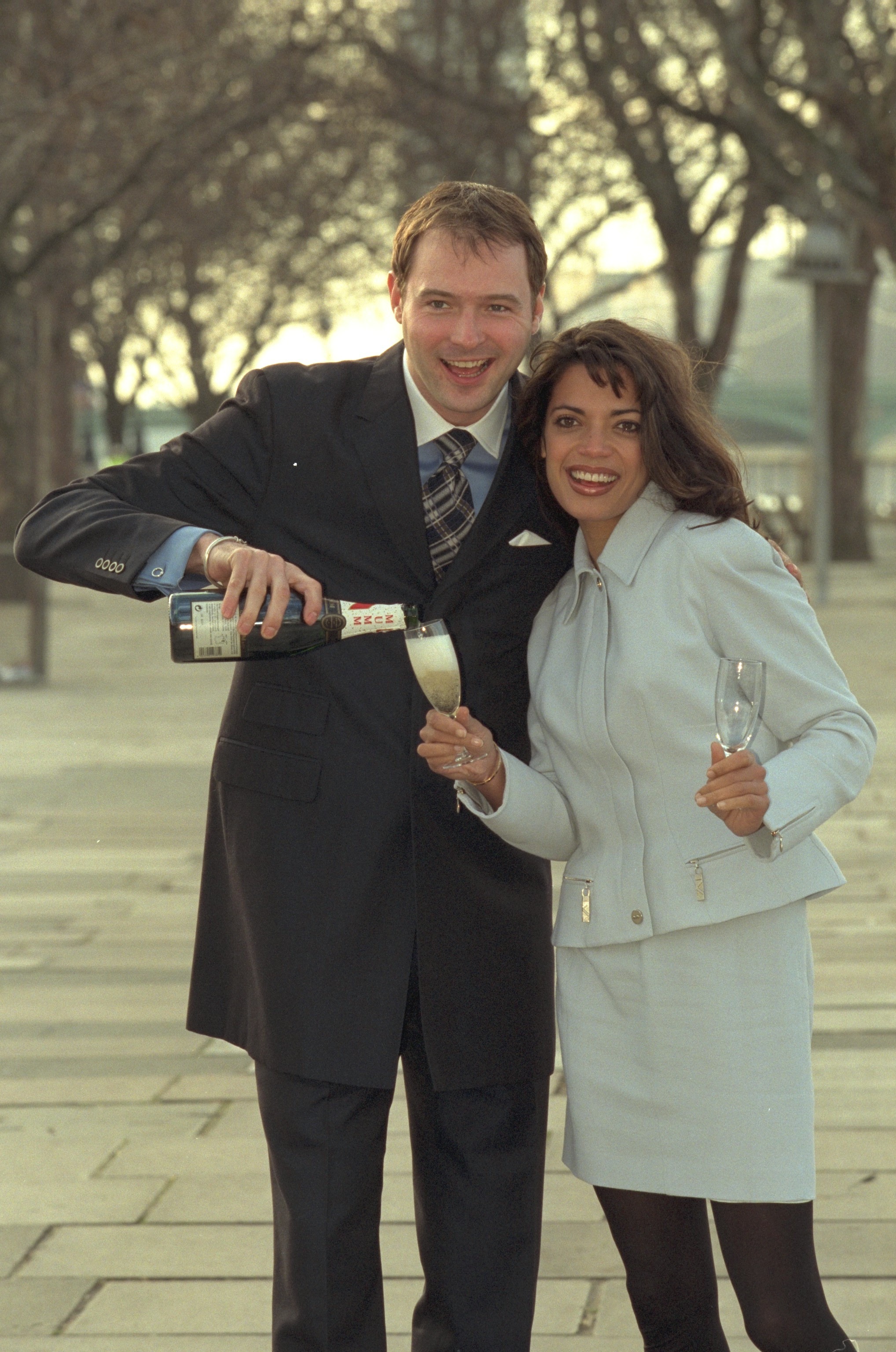 Jenny with John Leslie in 1998 celebrating his new job on Wheel Of FortuneCredit: Rex Features

“And then all of a sudden his management got involved. They all got scared, and that was that. I was cut off, which was a bit of a shame, but I was only a kid, 18 or 19.”

Jenny also grew close to Take That’s Jason Orange in the boyband’s ’90s heyday — also drawing anger from their fans. She says: “He was another really, really kind, humble guy. It wasn’t like I was always going for boyband members, just that I did a Saturday morning TV show and didn’t have much of a social life, as I was working so much I never really went out.

“I only met guys who were guests on the show. Jason used to send me anonymous Valentine’s — I worked out it was him. We dated on and off and again it was in the height of their fame. He was quite spiritual and gave me really good self-help books. Take That fans used to put their lit cigarettes through my letterbox. I’m still really close to his mum, Jenny.”

Her meetings with the stars have continued. Last year she received a friendly kiss on the lips from Arnold Schwarzenegger while hosting a Q&A in Wales — and she describes him as “a killer kisser”. Jenny also spent time with Arnie’s fellow action star Sly Stallone, and says: “I actually gave him a kiss too. He was a bit more at arm’s length, though.” 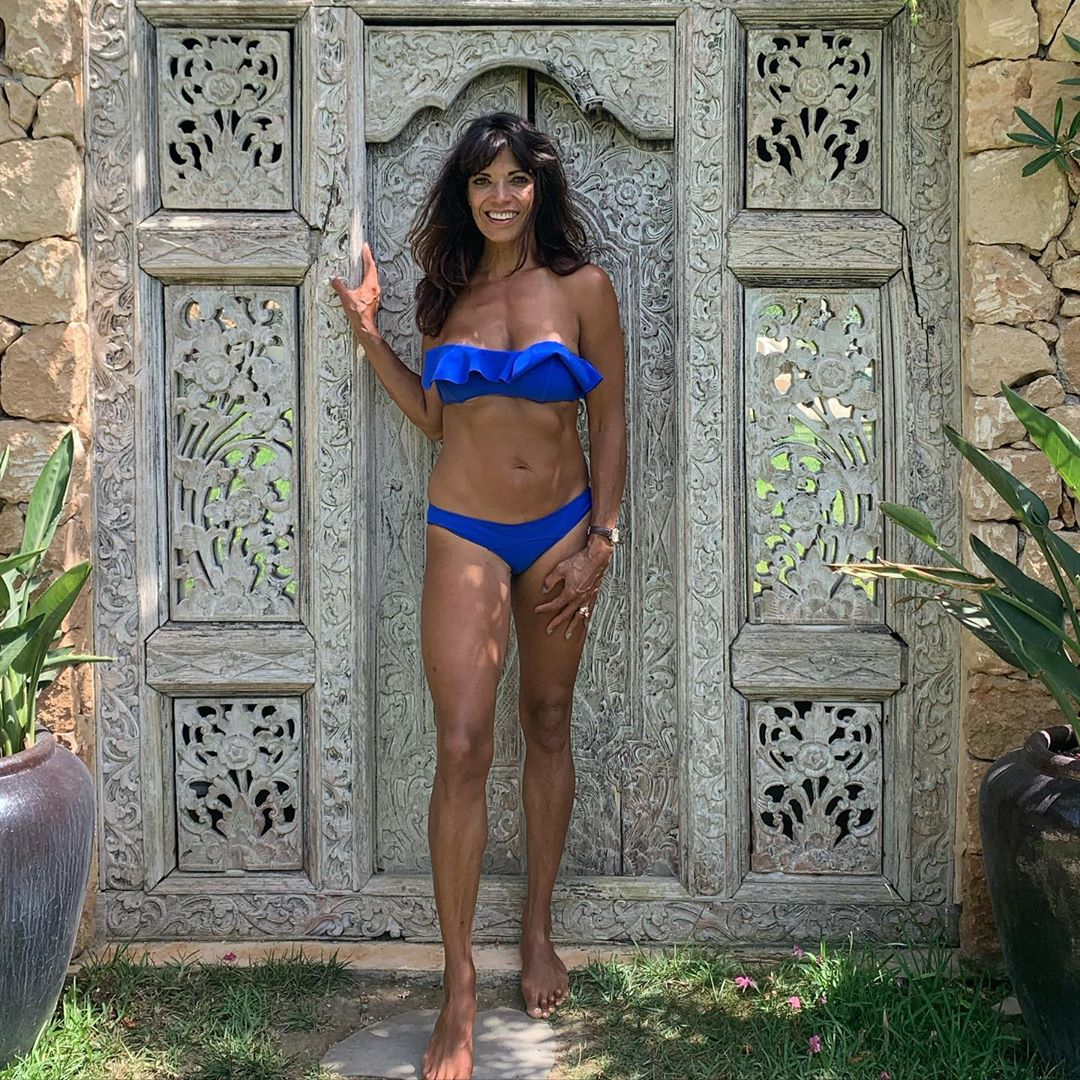 ‘Don’t get bitter, get better’

Mum-of-two Jenny’s private life has been far from smooth sailing. In 2009 she discovered her millionaire husband Toby Baxendale had started an affair with recruitment consultant Suzanne Galloway while Jenny was expecting their second child, Polly, now 11.

She says it left her crying “until there were no tears left” and resulted in their divorce after just three years of marriage. She adds: “I remember the first thing I thought when it all happened was, ‘Don’t get bitter, get better’.

“All that happens is you get so chewed up, and it’s so exhausting, it can make you ill. I don’t want my kids to think, ‘My mum was so bitter about my dad’. It’s all good with Toby now. We flip-flop with the girls now and it’s actually quite a relaxed arrangement.

“We chat about the girls all the time if either of us have got any issues. We don’t all get together at Christmas or anything like that but everyone is round the corner. There’s not much interaction but when there is, it’s all quite pleasant.” 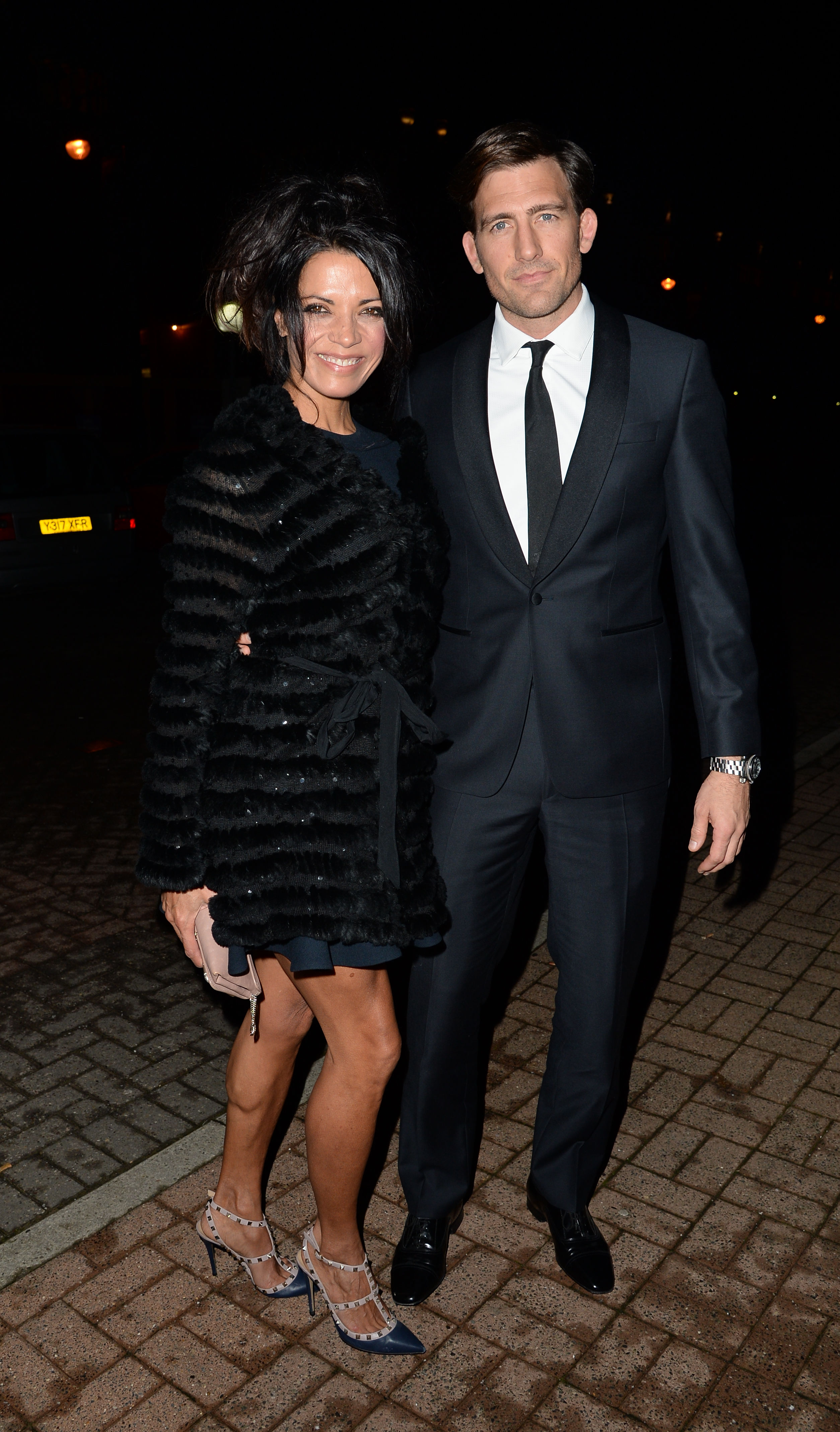 Jenny split from her former husband Toby Baxendale after she discovered he had an affairCredit: WENN 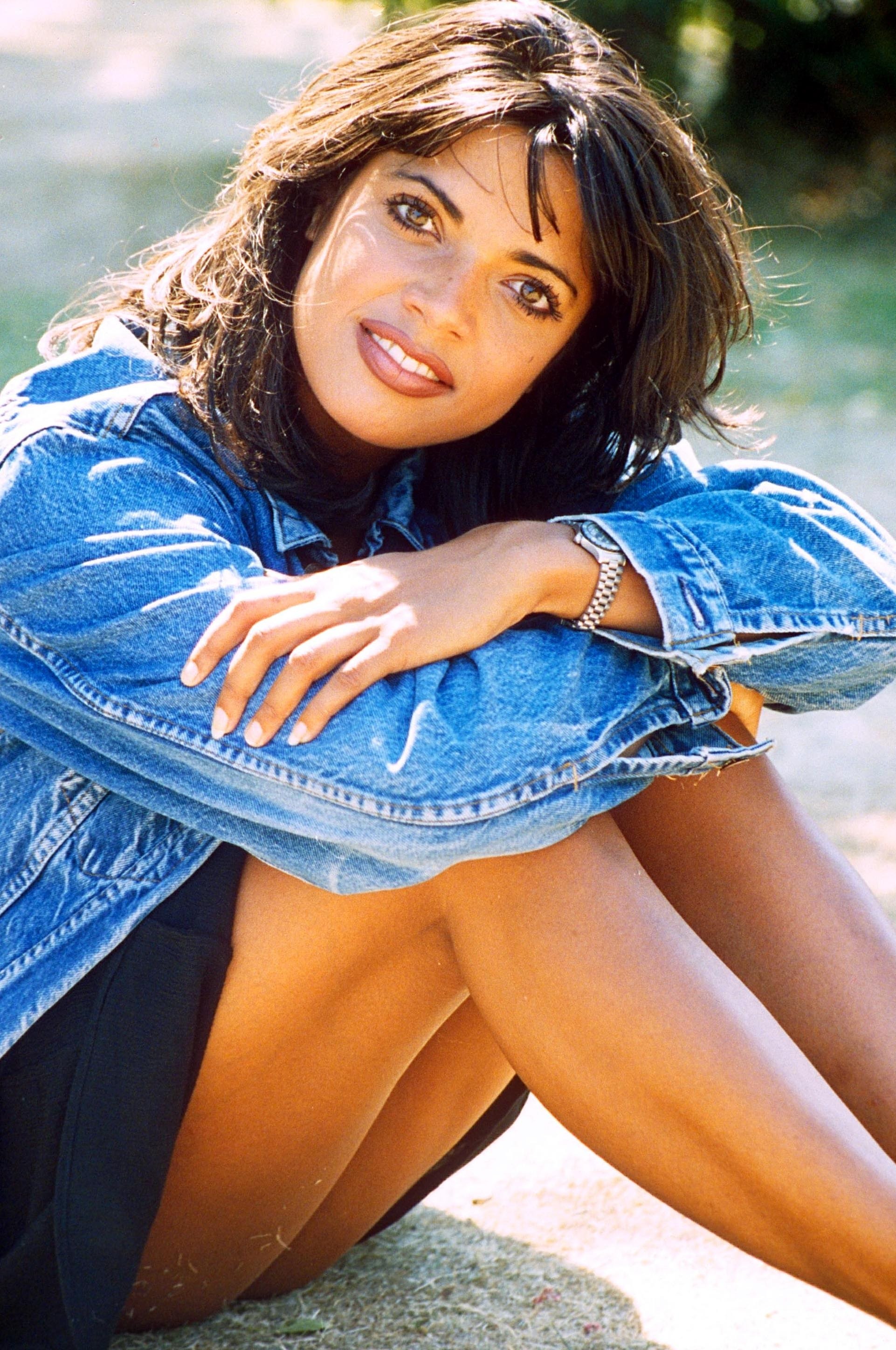 She recalls telling herself ‘Don’t get bitter, get better’Credit: Rex Features

At Christmas 2010 Jenny’s life was turned around when she bumped into sports therapist Martin Lowe while getting a coffee at London’s Euston station. The pair are now engaged. She recalls: “We met in Pret A Manger and I’d been to a Christmas party. I had false eyelashes. One was hanging off my eye — I was looking irresistible.

“Then this guy walked in and I thought, ‘He’s dead fit, he is’, then he sat opposite me. He went, ‘Do you want my number?’ He proposed about four years later in New York.”

Jenny, who is seven years older than Martin, adds: “When we first met and Connie was about eight or nine she said to me, ‘Mum, I think you’re a cougar’. And I was like, ‘What?’ I had to look it up and apparently I’m not officially a cougar as there has to be a larger age difference than there is between Martin and me.

“I don’t know what’s stopping us getting married — maybe because we want to get married abroad. He’s never really lived with anyone and he’s quite a free spirit. Or he was before.” 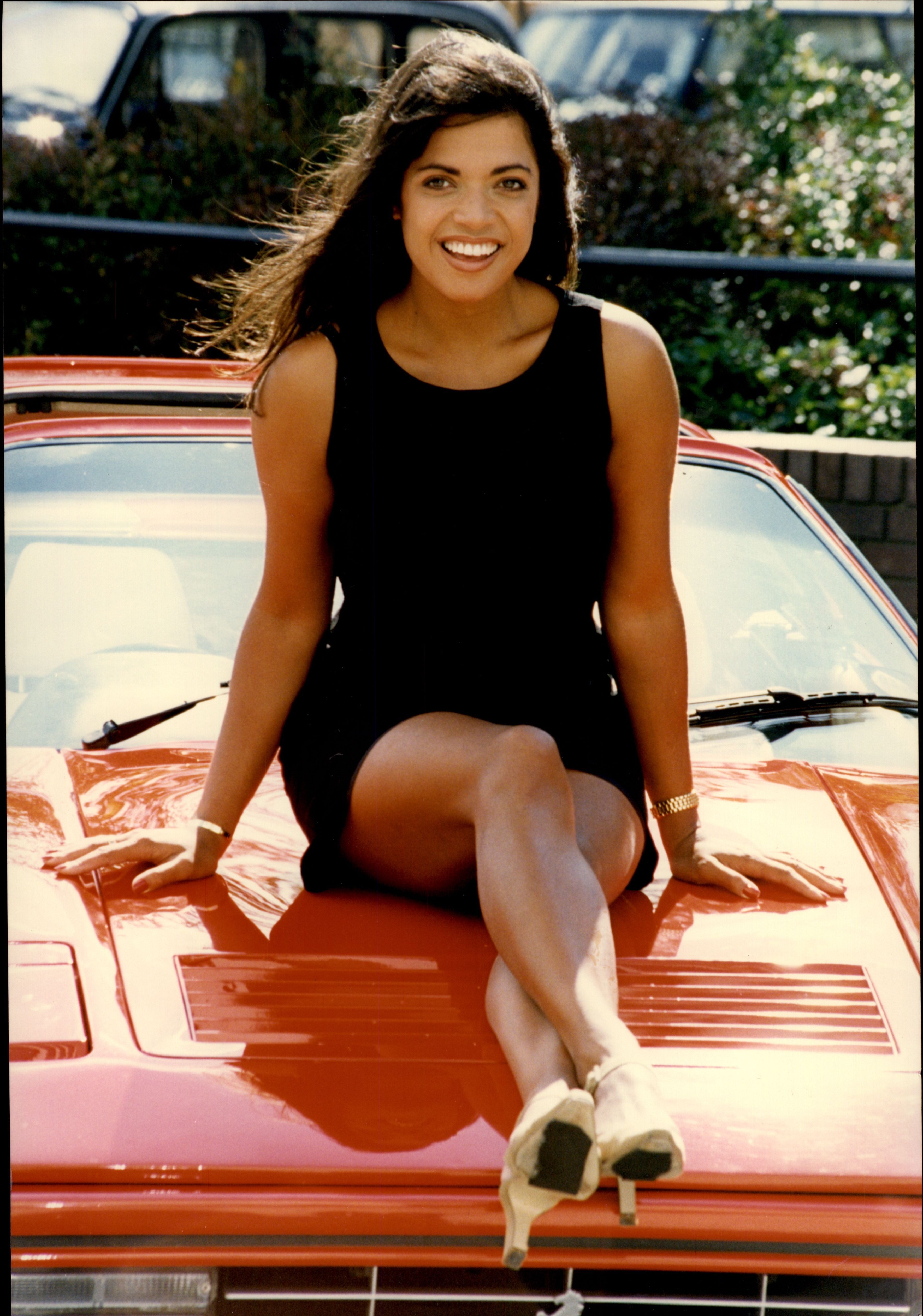 The stunner is now engaged to sports therapist Martin Lowe, whom she met in 2010 while getting a coffee at London’s Euston stationCredit: Rex Features 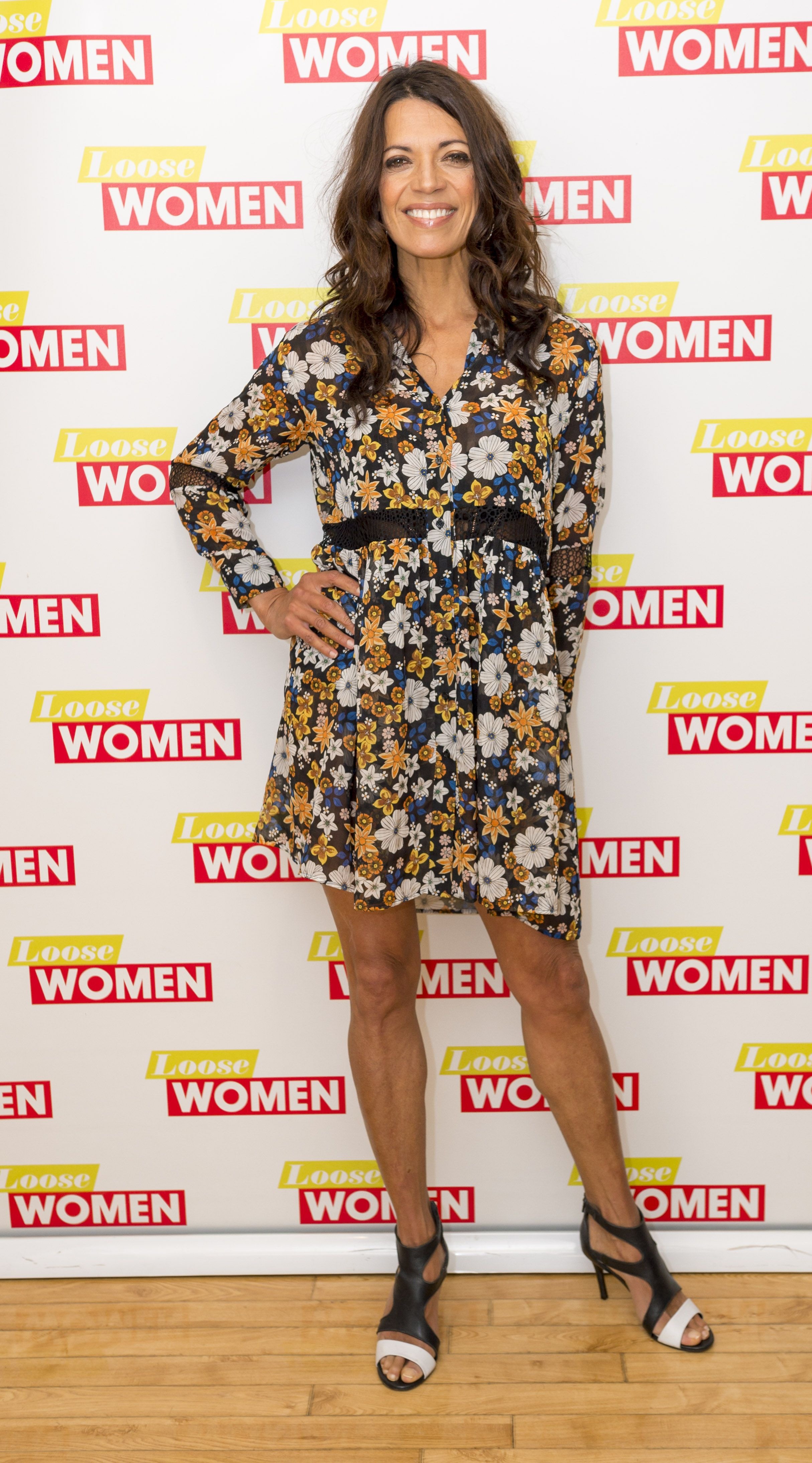 Jenny, who has become a regular panellist on ITV1’s Loose Women, credits her fiancé Martin with keeping her in great shapeCredit: Rex Features

Jenny, who has become a regular panellist on ITV1’s Loose Women and appeared on Channel 5’s Life On The Farm, has credited fiancé Martin with keeping her in great shape.

She does lots of hot yoga and weights in the gym, as well as cutting out sugar and processed foods. She also swears by taking CBD oil, which is produced from the cannabis plant.

She says: “I’m past seeking validation or admiration. I don’t need it. I just want to celebrate the fact that I’m 52 and I feel great inside, so that probably filters out to the outside world.”