The 31-year-old added that she was “forced” to sign an NDA while working with Britney in 2015. 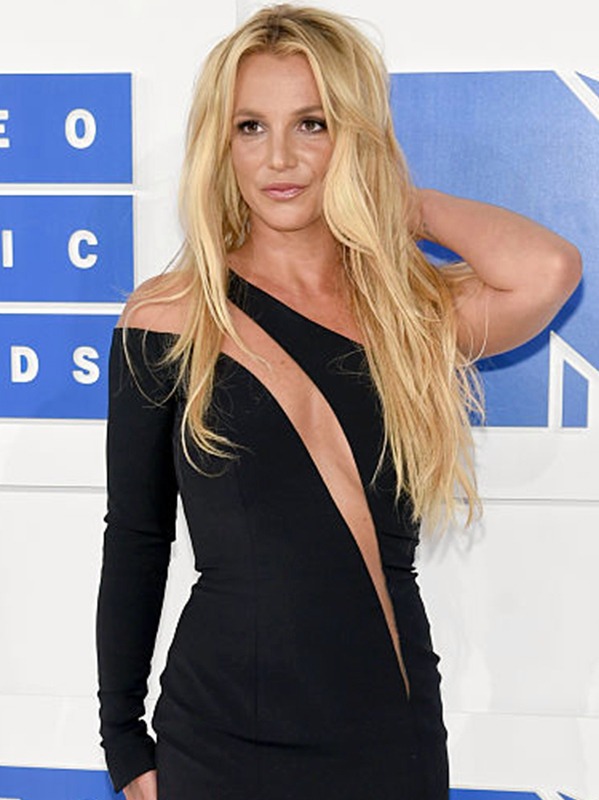 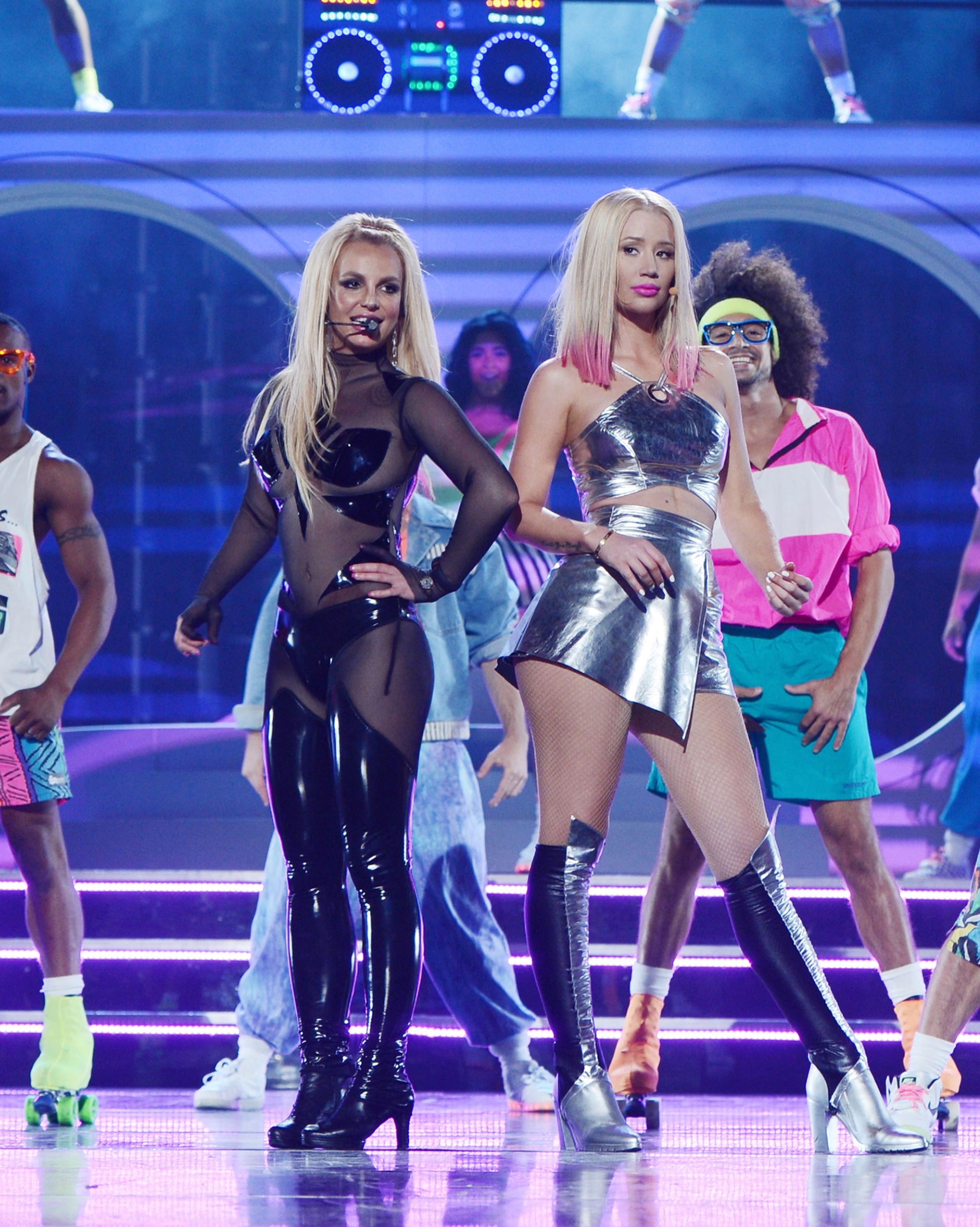 The two previously collaborated together on the 2015 song Pretty GirlsCredit: Getty – Contributor

Britney, 39, and Iggy previously collaborated together on the song Pretty Girls.

The rapper took to Twitter on Wednesday night to make claims against Britney’s dad, who has legally controlled the singer for the past 13 years.

Iggy stood by Britney in a lengthy post captioned #FreeBritney, writing: “Its basic human decency to at the very least remove a person Britney has identified as abusive from her life. This should be illegal.”

While reflecting on their collaboration, Iggy continued: “During the time we worked together in 2015, I personally witnessed the same behavior Britney detailed in regards to her father last week and I just want to back her up and tell the world that: She is not exaggeration or lying.

“I saw her restricted from even the most bizarre and trivial things: like how many sodas she was allowed to drink. Why is that even Necessary? 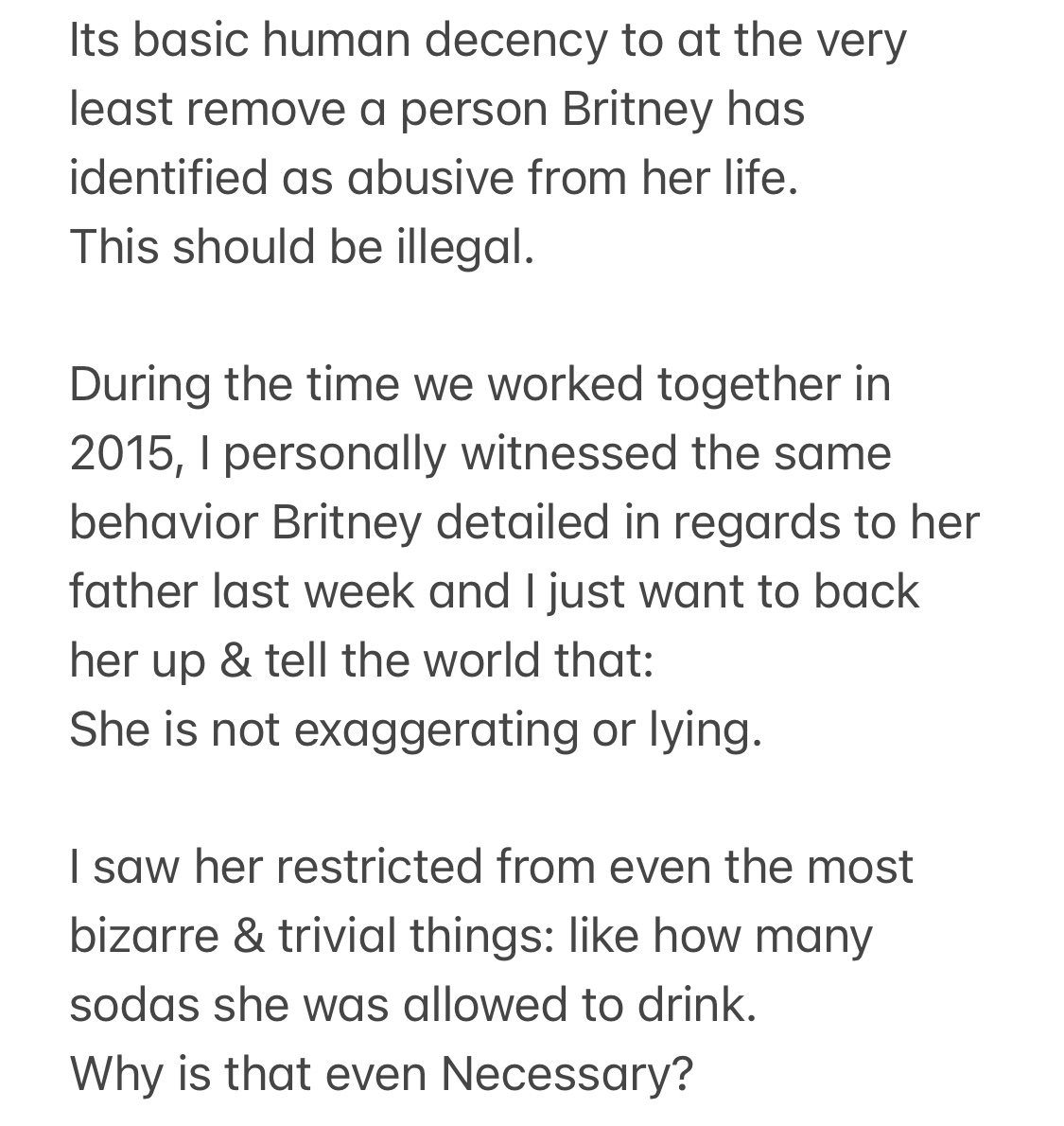 Iggy stood up for Britney in a lengthy Twitter postCredit: Twitter/Iggy Azalea 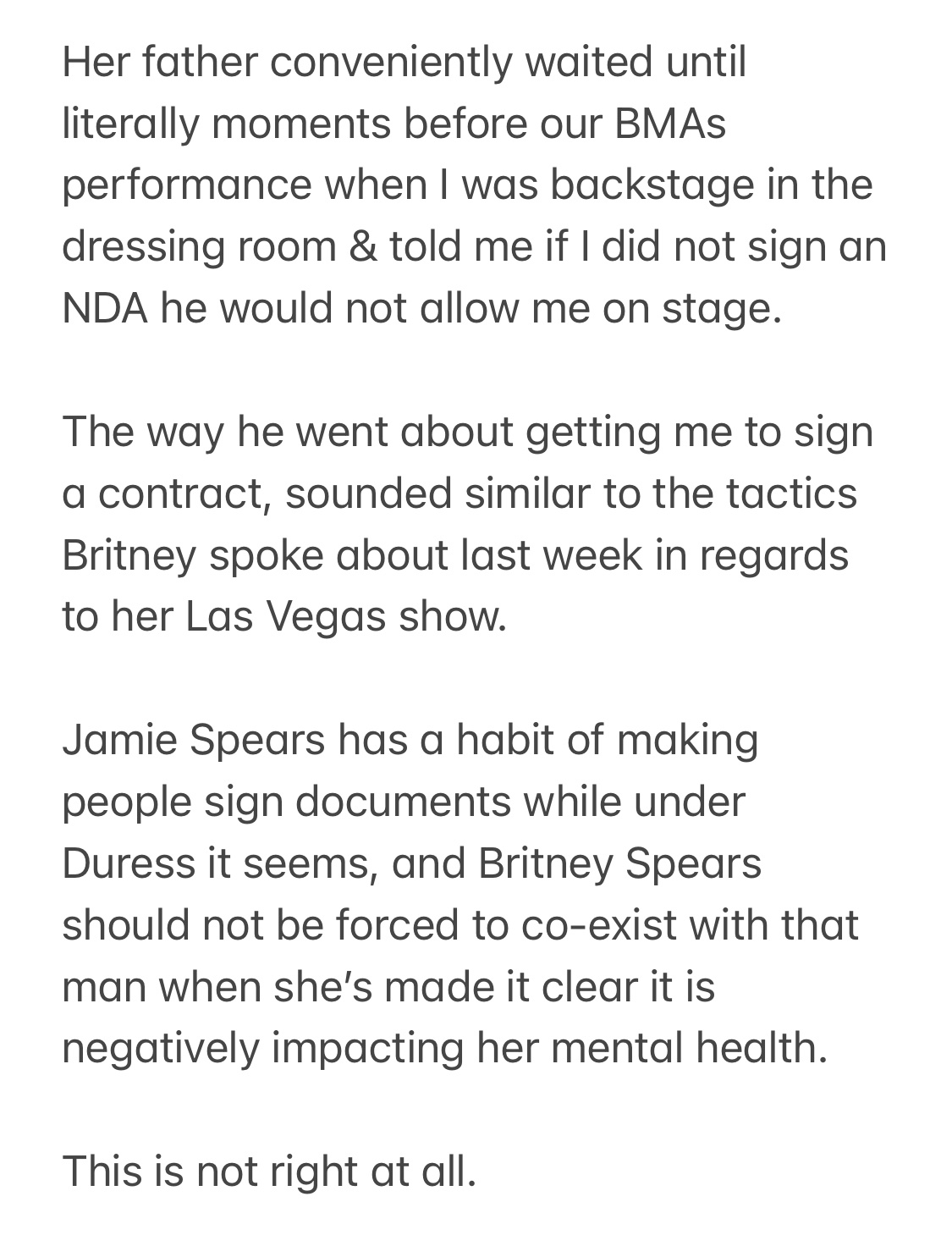 She said Britney should ‘not be forced to co-exist’ with her fatherCredit: Twitter/Iggy Azalea

‘Her father conveniently waited until literally moments before our [Billboard Music Awards] performance when I was backstage in the dressing room and told me if I did not sign an NDA he would not allow me on stage.

‘The way he went about getting me to sign a contract, sounded similar to the tactics Britney spoke about last week in regards to her Las Vegas show.

‘Jamie Spears has a habit of making people sign documents while under Duress it seems, and Britney Spears should not be forced to co-exists with that man when she’s made it clear it is negatively impacting her mental health.”

She concluded: “This is not right at all.”

It was reported earlier on Wednesday that the singer’s judge has DENIED the pop star’s request to remove Jamie as the conservator of her estate. 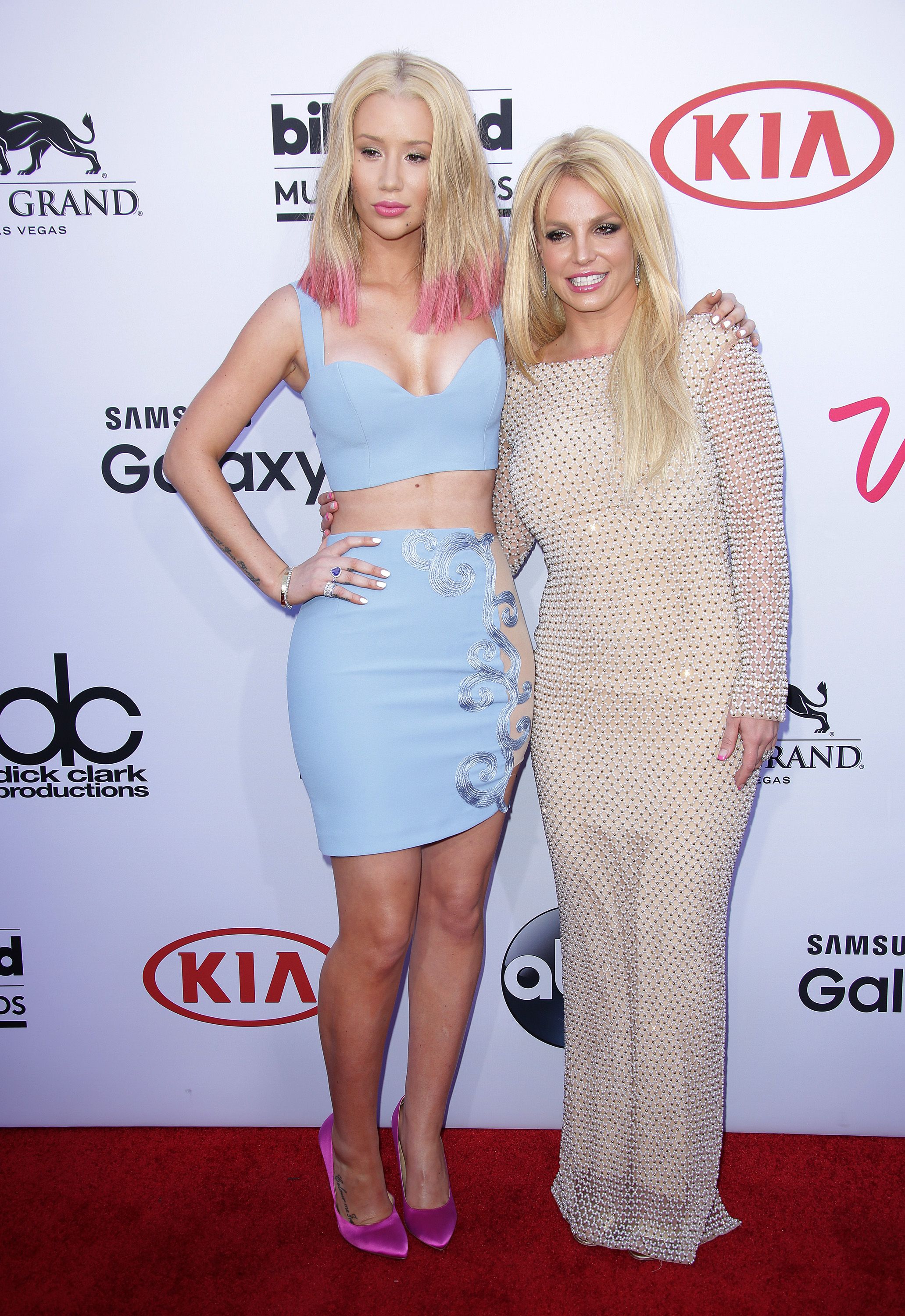 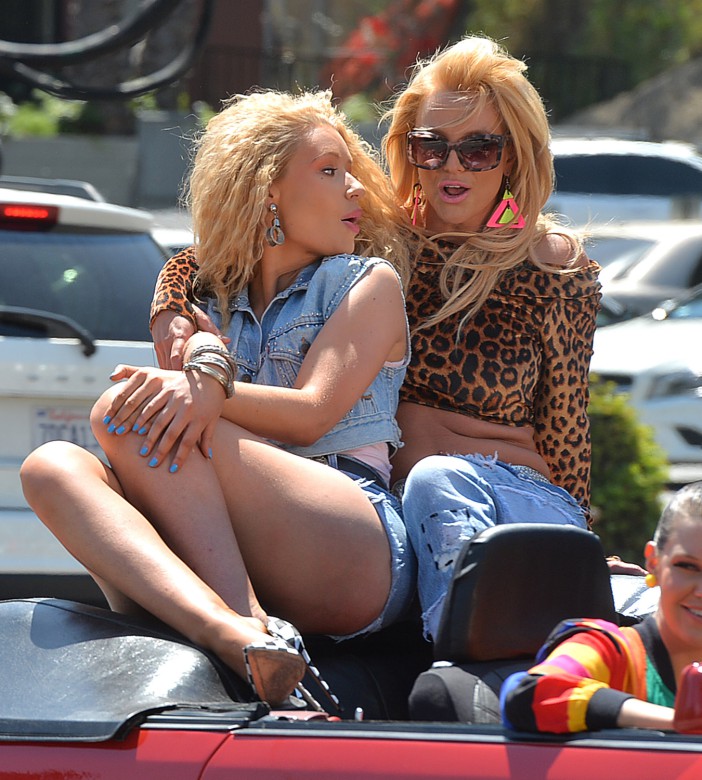 She said what’s happening to Britney is ‘not right at all’Credit: Splash News

The bombshell court move came after last week’s shocking testimony which Britney claimed the conservatorship was so “abusive,” she wanted to “sue her family.”

The singer officially requested to terminate Jamie’s involvement with the conservatorship earlier this week, though TMZ reported the judge denied her wishes.

According to the outlet, a judge ruled that Jamie will remain her co-conservator “at least for now.”

Britney’s attorney, Sam Ingham, wanted Jamie replaced by Bessemer Trust – a third party company that would be the sole conservator of her estate – but the judge denied the request.

The star’s legal team reportedly first filed for Jamie’s removal from the conservatorship back in November but they were also denied then.

Britney made a number of shocking claims during her virtual court hearing last week, including that she’s not allowed to marry and take out her IUD so she can have another baby.

The Toxic singer alleged that her conservator “won’t let her.”

She told the court: “I want to get married and have a baby.

“I wanted to take the IUD out and have a baby but conservator won’t let me because they don’t want me to have a baby.”