In her February 2021 cover story for NME Australia, Deena Lynch declared that she’s “not here for the short-term game”. At the time, she was gearing up to unleash the ‘Antihero’ EP, her second project as Jaguar Jonze, the mysterious yet technicolour character she’d introduced the year before with ‘Diamonds & Liquid Gold’.

On ‘Antihero’ – one of NME’s best Australian releases of 2021 – Lynch set listeners up for a a face-to-face meeting with this iron-fisted, poker-faced, gun-slinging badass of a character – a heroine who, as she tells NME a year later, is no longer an alter ego but rather the “most authentic, and the most vulnerable and transparent” version of herself.

After fully embracing that Lynch and Jaguar Jonze were one and the same, the artist took some time to reflect. She trawled through her personal archives, taking stock of everything she’d done on her journey from “a shell of a human being”, using art to “see what kind of magical wonderland can exist behind” the dull corporate grind, to the fierce and fearless powerhouse she is right now.

A turning point came when she unearthed ‘Not Yours’, a song she’d written in 2019 to “take the weight off my shoulders about what I’ve been through as a sexual assault survivor”. Writing it was a “cathartic process”, she says, but the state of her confidence back then meant she “was never going to let it see the light of day”. But when Lynch dusted off the original project file, she got goosebumps. “I saw how far ahead I’d moved from being that person – how I had grown and healed so much – and I forgot what it felt like to be where I used to be.”

Jaguar Jonze. Credit: She Is Aphrodite

Lynch has since turned the rough acoustic demo into a sizzling, swaggering ballad that twines a dirty blues-rock twang with swelling strings. She declares: “This body’s mine and not for you to feel and touch / Pretend you’re blind but I know that you’re not / You can never right your wrongs / Hope you change before you’re gone.”

‘Not Yours’ was the spark that gave way to an eruption of hard-earned confidence, fury and authenticity – all fully displayed on Jaguar Jonze’s debut album, ‘Bunny Mode’. Out today (June 3), the record is named for the coping mechanism Lynch developed to navigate the triggers for her complex PTSD. In the face of physical, psychological or emotional threats, Lynch would become still and quiet, mimicking the way a wild rabbit will play dead in the presence of a predator: “I would freeze, I would play dead, and I would just wait for the threats to wash over me.”

There are two sides to ‘Bunny Mode’, Lynch says: “This album is a way for me to say ‘thank you’ to my bunny mode,” she says, “for allowing me to survive up until this point… but also saying, ‘I don’t need you anymore.’ The biggest [step I’ve taken in my] healing journey has been to give myself permission to express the feelings and have the conversations that I was so scared to have with myself, and would repress and deny.”

“I’m looking doe-eyed into the world, trying not to fall down on my bike while I try to balance it”

Once she embraced the power of opening up to herself, Lynch channelled the energy she’d spent repressing into connecting with like-minded folks walking down the same paths she was. “That’s how we’re hardwired as humans,” she says, “by connection and community. That’s my favourite thing about music: I get to have this honest dialogue with myself, but I also have this give-and-take relationship with the people who resonate with my music.”

‘Punchline’ is a notable example of the ‘give’ in this exchange: fellow Brisbane artist Charlotte Marnee said she “instantly resonated” with the song’s perspective on “the fetishisation and stereotypes [about Asian women] enhanced by Australian and western media”. ‘Little Fires’ on the other hand, is a direct result of Lynch being galvanised by the solidarity shown by her community. The song, she says, is “a reminder about where we’ve come from, what we are fighting for, and what we can achieve when we work together”. 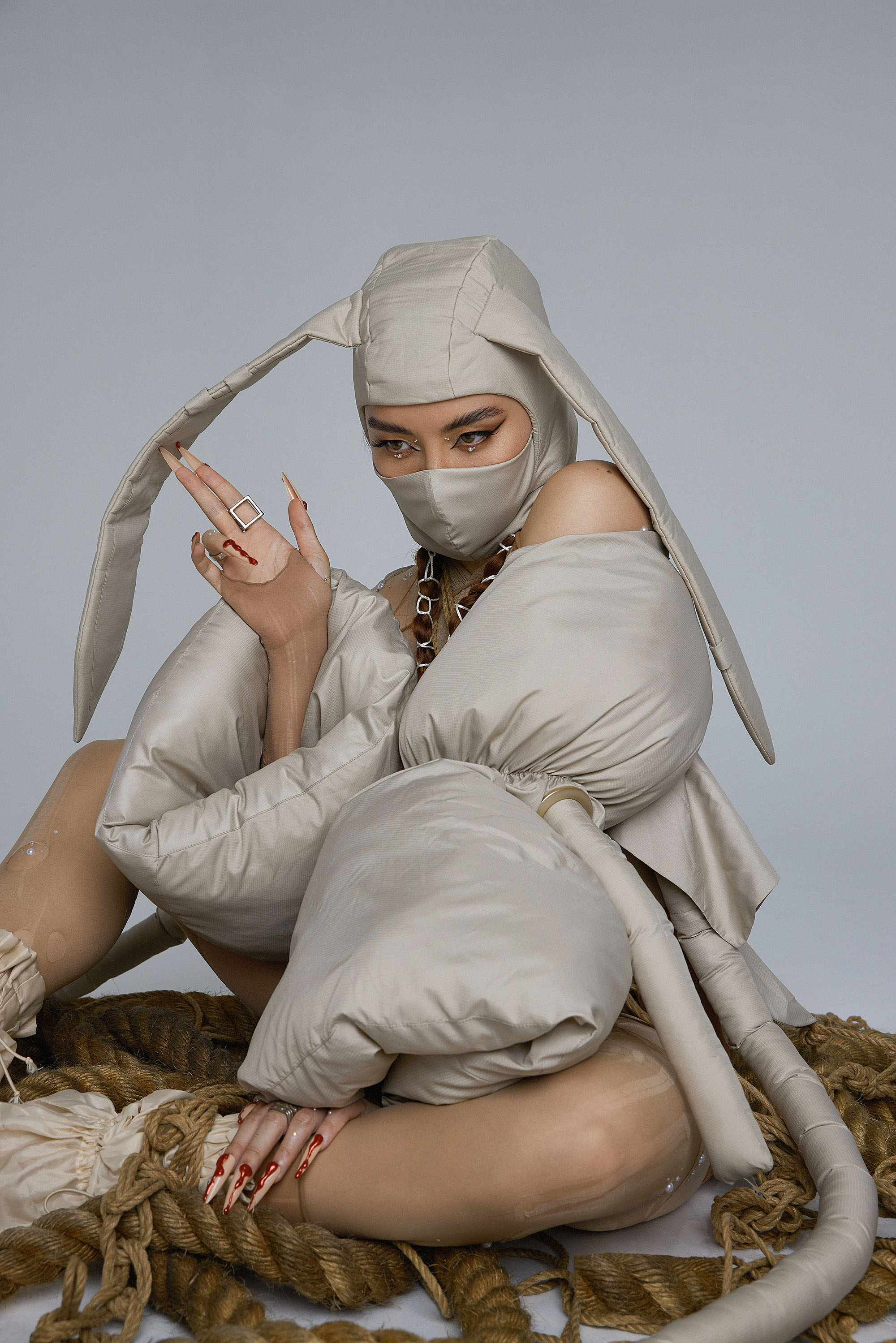 But this is not the part of the Jaguar Jonze story where Lynch rides off into the sunset, her mission accomplished and journey having come to its happy ending. She’s at an impasse between her art and her activism for women of colour and abuse survivors in Australian music – thankful for the praise she’s received for the latter, but frustrated that it often comes at the expense of her deserved recognition as an artist.

“My career has been completely taken over by the advocacy,” she admits with a sigh. “I want this album to say, ‘I am so passionate about my advocacy, but also, let me slap you in the face with my artistry.’ This is a landmark moment for me. It’s an album [of stories] that are extremely personal for me, and will always be emotional – but I want people to see that I have many stories to tell, and this album is just a taste of the breadth of genres and sounds and attitudes that I’m capable of.”

There’s a punky edge to the storytelling on ‘Bunny Mode’, both musically (see the biting guitars on ‘Swallow’ and ’Punchline’) and thematically (see the snarky hooks of ‘Who Died And Made You King?’). That punk influence, though, was completely accidental; Lynch had “never really dived into punk music” until she saw fans comparing ‘Trigger Happy’ and ‘Punchline’ to Garbage. She muses: “I think because I love guitar music, and I had found this new emotion called ‘anger’… The power of those two combined is probably where punk came from to begin with. I just went on that same journey, like, decades later.”

“I want this album to say, ‘I am so passionate about my advocacy, but also, let me slap you in the face with my artistry’”

The fact that Lynch inadvertently created punk music for herself – “post-post-post-post-post-punk”, she quips – speaks to the spirit of Jaguar Jonze in the ‘Bunny Mode’ era. She explains: “This era of Jaguar Jonze, for me, is like the childhood I never had. I had to grow up really quick because of everything I’ve been through, but now, in my 20s, I get to be the child. I’m looking doe-eyed into the world, trying not to fall down on my bike while I try to balance it.”

Through it all, Lynch has remained – and is committed to remaining – staunchly DIY. She writes all of her music on an acoustic guitar named Dingo (in honour of her late pet dingo, Simba), which she spent three months building from scratch using wood, metal, mother-of-pearl and cattle bones sourced from her stomping grounds in Queensland. She makes all of her own artwork – under the moniker Spectator Jonze – with a painfully slow version of Photoshop from 2011, which runs at a lower resolution than her current laptop.

She can afford the latest update, and the newest top-shelf Fenders, but where’s the fun in that? Besides, “I’ve just become so good at knowing what my vision is, and how to work within my limitations,” she says, “that I can make that vision happen with whatever tools I have at my disposal.”

At the end of the day, Lynch stresses, passion and authenticity are not mutually exclusive with virtuosity. She does admire “those artists who spend their whole lives honing the technical skill of music”, but takes pride in the fact that she’s “at the complete opposite end of that scale”. She cites Johnny Cash as a major influence: “he can sound so out of tune” but “because he’s so connected with what he’s singing, lyrically, it always moves me to tears”.

“That’s what I want to be,” she declares proudly. “I want to be able to connect with people emotionally, and let them know that it’s not about always being technically brilliant at things, it’s about your ability to connect as a human. Because I can’t jam – I can’t tell you what chords I’m playing, or what scale the song is in, or what the time signature is – but I am a really passionate person, and everything I commit myself to, I give 200 per cent.”

Jaguar Jonze’s ‘Bunny Mode’ is out today via Nettwerk