A bit of a learning curve. Before their romantic engagement aired on season 16 of The Bachelorette, Tayshia Adams had some big questions about fiancé Zac Clark‘s sobriety journey.

The New Jersey native, 37, opened up about his past struggle with substance abuse while vying for Adams’ heart on the ABC dating series. Clark’s history of drinking and using drugs was a factor in the end of his marriage to Jennifer Stanley-George in 2011, but Adams, 30, kept an open mind while they explored their connection.

“Usually you tell someone you’re an alcoholic or you’re a drug addict, whatever it is, and it goes one of two ways. … She was kind of in the middle,” Clark explained during the Monday, January 25, episode of Jana Kramer and Mike Caussin‘s “Whine Down” podcast. “She didn’t have any direct, I think, experience with it but she definitely had an open mind and she asked all the right questions. Like, early on, she said, ‘Can I drink and then kiss you?’ She’s a sweetheart.” 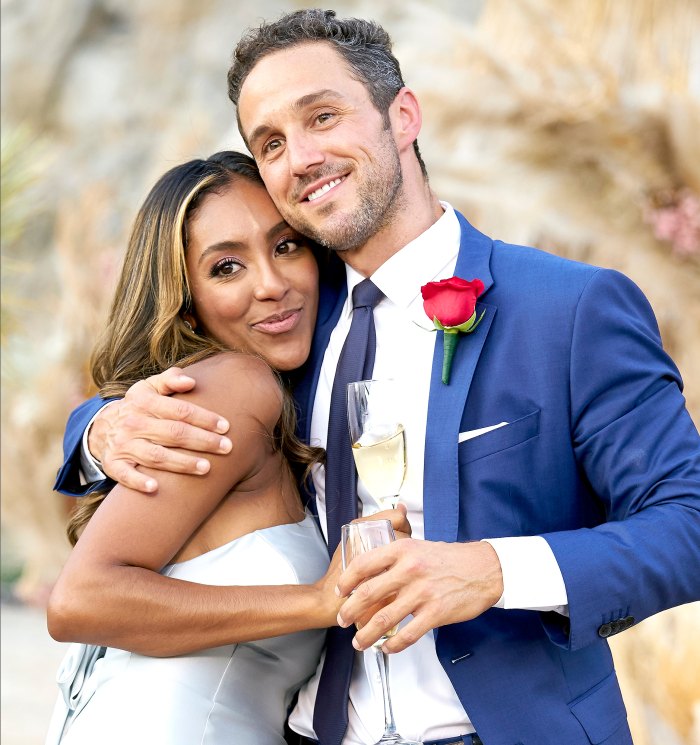 The former phlebotomist’s mature reaction to Clark’s past was something that made her stand out from the very beginning. “It was one of the things that I was most attracted to in her is that — not only with me, but with all the guys there — she was able to take on a lot of s–t and hold space for us,” Clark added.

During his first one-on-one date with the Bachelor in Paradise alum, Clark opened up about an eye-opening interaction that helped him realize it was finally “time” for him to get serious about being sober. He later completed a four-and-a-half month stay in rehab. Now, he works as an addiction specialist at a treatment facility in New York City, helping to prepare former addicts to excel in their lives after rehab.

Though sobriety is a big difference in Adams and Clark’s lifestyles, the California native didn’t shy away from the topic. Clark, for his part, went into the reality TV experience knowing he didn’t want to hide from his past.

“My attitude around that was just like any other date I’d been on. If she’s not going to love me for who I am, then it’s better that we end this thing now than get into it and come to find out there’s going to be an issue there,” he said. “For me, I’m really proud of who I am and it’s a huge part of me. [Recovery] allows me to live the badass, next-level life that I get to live.”

After his romantic proposal aired in December 2020, Clark shut down speculation that he had been drinking while filming, asserting on the “Clickbait” podcast that he’d touched “no drugs, no alcohol, no nothing since August of 2011.” He revealed at the time that Adams turned down a drink during one post-rose ceremony toast — and that’s when he realized she was The One.

“The guy came out with the tray of champagne and there was four champagnes and one apple cider and she looks at him and she goes, ‘No, I’m drinking apple cider with him tonight,’” he recalled. “And I said, ‘What?!’ She made the guy go back, get an apple cider while all these people are waiting. So, she was on team Clarky that day, and that’s when I knew.”

Taylor Nolan’s Tweets Made Me ‘Sick to My Stomach’

Matt Damon gets Fake Loki makeover as he films Thor: Love and Thunder

Will Smith Isn’t Ruling Out a Run for Office: ‘I’ll Consider That’