WITH their second baby being born this week and a wedding in the mix, Joe Swash and Stacey Solomon have become the ultimate #CoupleGoals.

And having moved into their idyllic Pickle Cottage together, the pair’s relationship appears to be the ultimate fairytale romance.

Stacey Solomon and Joe Swash finally have their happily ever afterCredit: staceysolomon / instagram 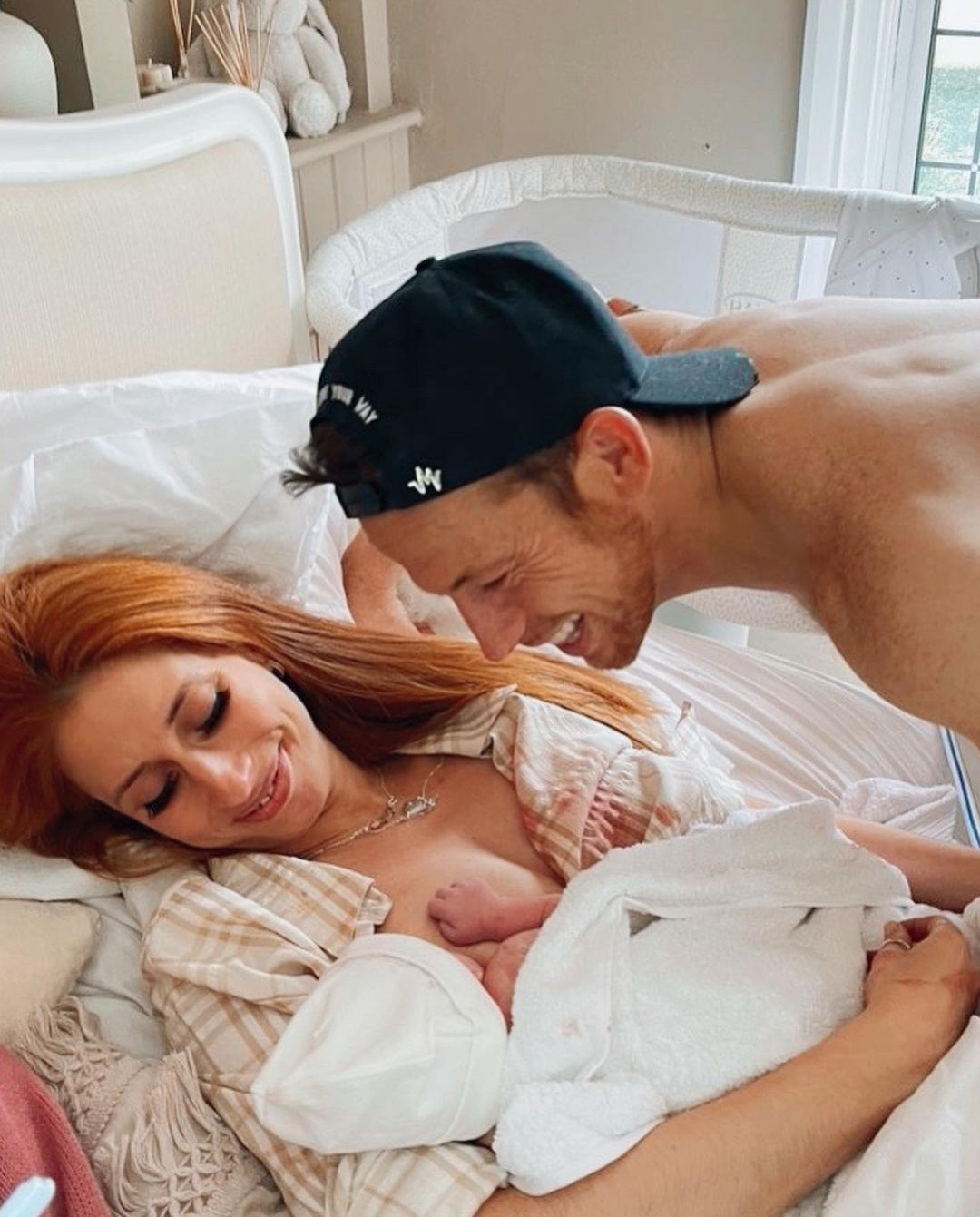 The couple have just welcomed their new baby girl into the worldCredit: Instagram

However, it’s been a long-time coming for Joe, 39, and Stacey, 31, who have both had to overcome a few obstacles to get their happily ever after.

Before he settled into his role as a family man with his and Stacey’s son Rex, two, and his two-stepsons Leighton, 9,  and Zachary, 13, Joe spent years on the single market.

The EastEnders actor also endured the heartbreak of a ‘tricky’ court battle with his ex-girlfriend over his eldest child Harry.

Here Fabulous reveals how Joe moved on from the heartbreak of his past to bag his dream woman, and in turn become her dream man…

Before he fell into the arms of his Loose Woman fiancee, Joe Swash spent much of his time on the red carpet alone. 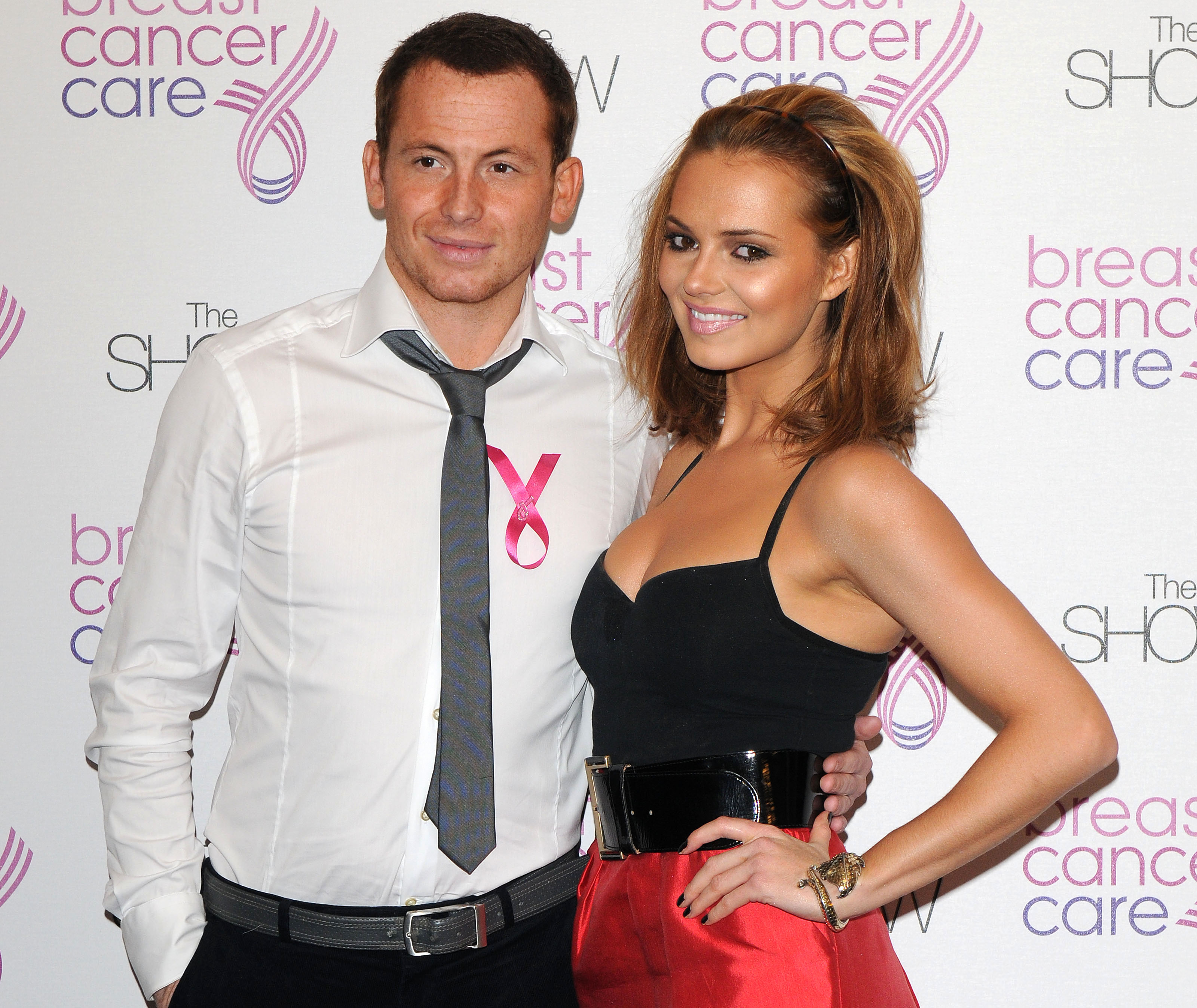 Joe had been single for six years before meeting Stacey, with his last girlfriend being Kara TointonCredit: Retna Ltd 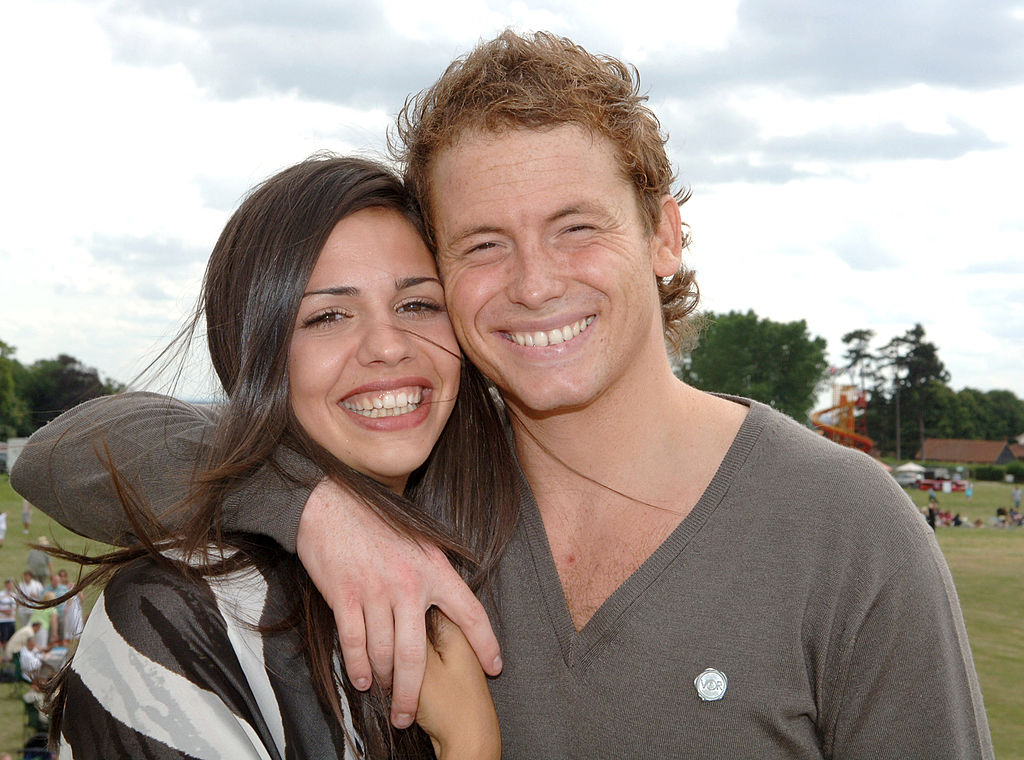 Prior to Kara, Joe’s only other known long-term relationship was with the mother of his son Harry, Emma SophocleusCredit: Getty

His previous relationship had been with fellow EastEnders actor and on-screen sister Kara Tointon.

The pair first met in 2005 when they played  Mickey Miller and Dawn Swann on the soap but it wasn’t until after Joe left the show in 2008 that they became a couple – however, it was short-lived love with the pair parting ways in 2010.

Prior to Kara, Joe’s only other known long-term relationship was with the mother of his son Harry, Emma Sophocleus.

Emma and Joe dated between 2005 and 2008, when their relationship famously ended in tears.

When he began dating Stacey, not only did Joe have to adjust to living with her kids, he also had to introduce her family to his own son, Harry, 14.

The dad has previously opened up about his ‘tricky’ relationship with Harry’s mum Emma, revealing that the pair had to go to court to settle custody issues over their son. 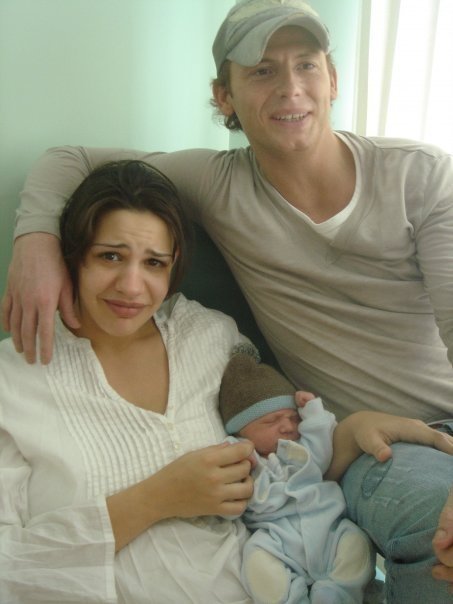 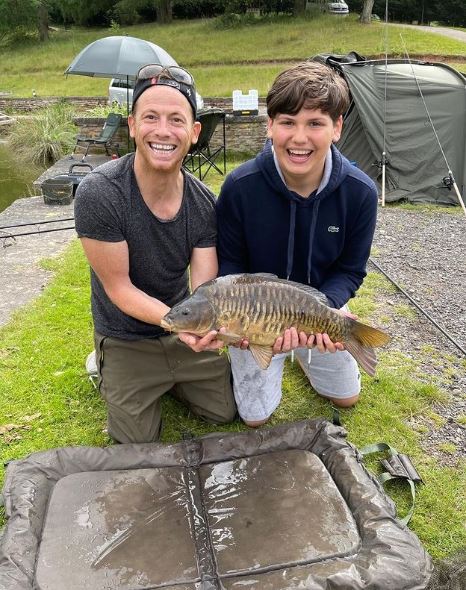 The ex-couple went to court over their son Harry but Joe now has a good relationship with himCredit: Instagram/realjoeswashy

Joe opened up on the podcast, Step Life.

“With me and Harry it was tricky with his mum,” he said.

“We had to go to court and stuff like that. So in hindsight it’s a great thing. But it’s been a strange one for Hal – he’s had to do a lot of adapting.

“I do feel quite sorry for Hal for what he’s had to go through.

“Me and Hal, we’re in each other’s lives on a daily basis now,” Joe said.

“We talk to each other every day, we see each other every couple of days, he only lives 20 minutes away from me and at the beginning, maybe even five years ago, it’s completely different to what it is now.”

Shortly after his relationship with ex Kara ended, Joe was finally introduced to the former X on I’m A Celebrity in 2010.

The pair became good friends after they met, and Joe later admitted he’d fancied Stacey back then, but it wasn’t the right time.

It wasn’t until six years later that the pair finally got together. 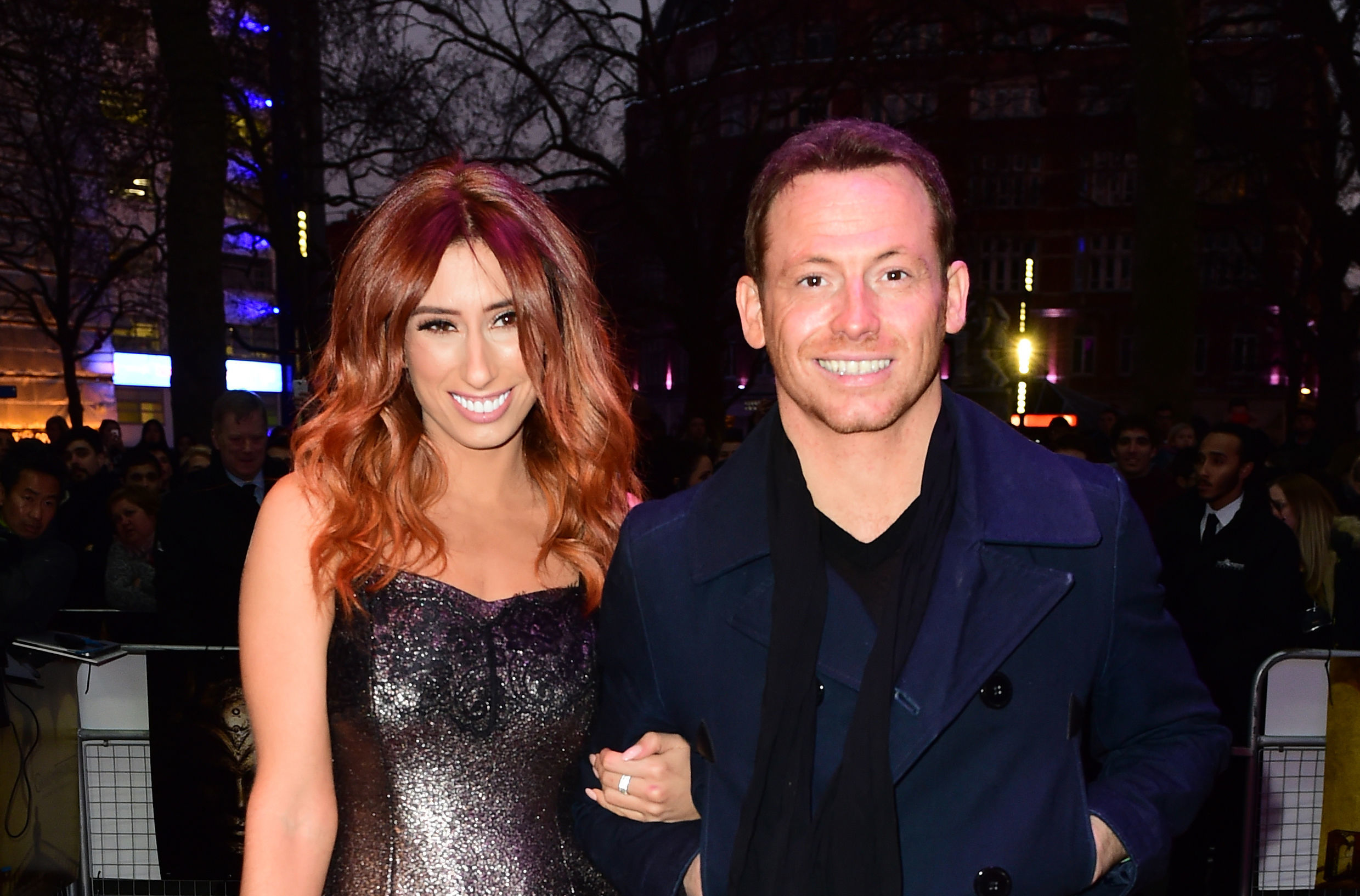 Stacey and Joe met in 2010 but didn’t start dating until 2016Credit: PA:Press Association

The pair first sparked dating rumours in January 2016 when Stacey posted a snap of herself on a spa weekend stating that she felt like a “new woman”. Then just days later she was spotted arm-in-arm with Joe in Essex.

That same month, Stacey made it official on Instagram – sharing a snap of her new boyfriend with some flowers.

But the pair admit that sparks didn’t immediately fly, as Joe previously admitted that his first kiss with Stacey was like “kissing a dead person.”

Appearing on Shopping With Keith Lemon, Joe told how the pair got close in Australia when Stacey was a guest on spin-off show I’m A Celebrity… Get Me Out Of Here! NOW! which he presented.

He said: “We spent loads of time together and before I knew it she was going home so I thought, I’ll make a move.”

Stacey added: “He opened the door and he just jumped on me. Keith, I didn’t know what to do so I just stood there like this.”

Joe then chimed: “It was like kissing a dead person! She didn’t move, no tongue action, it was all me. With my tongue I was trying to find her tongue. I was like, ‘what’s going on here’.”

The adorable couple moved in together in Essex during October 2018 after three years of dating.

Since moving in with Stacey, the couple have become somewhat of a “blended” family with both having kids from previous relationships. 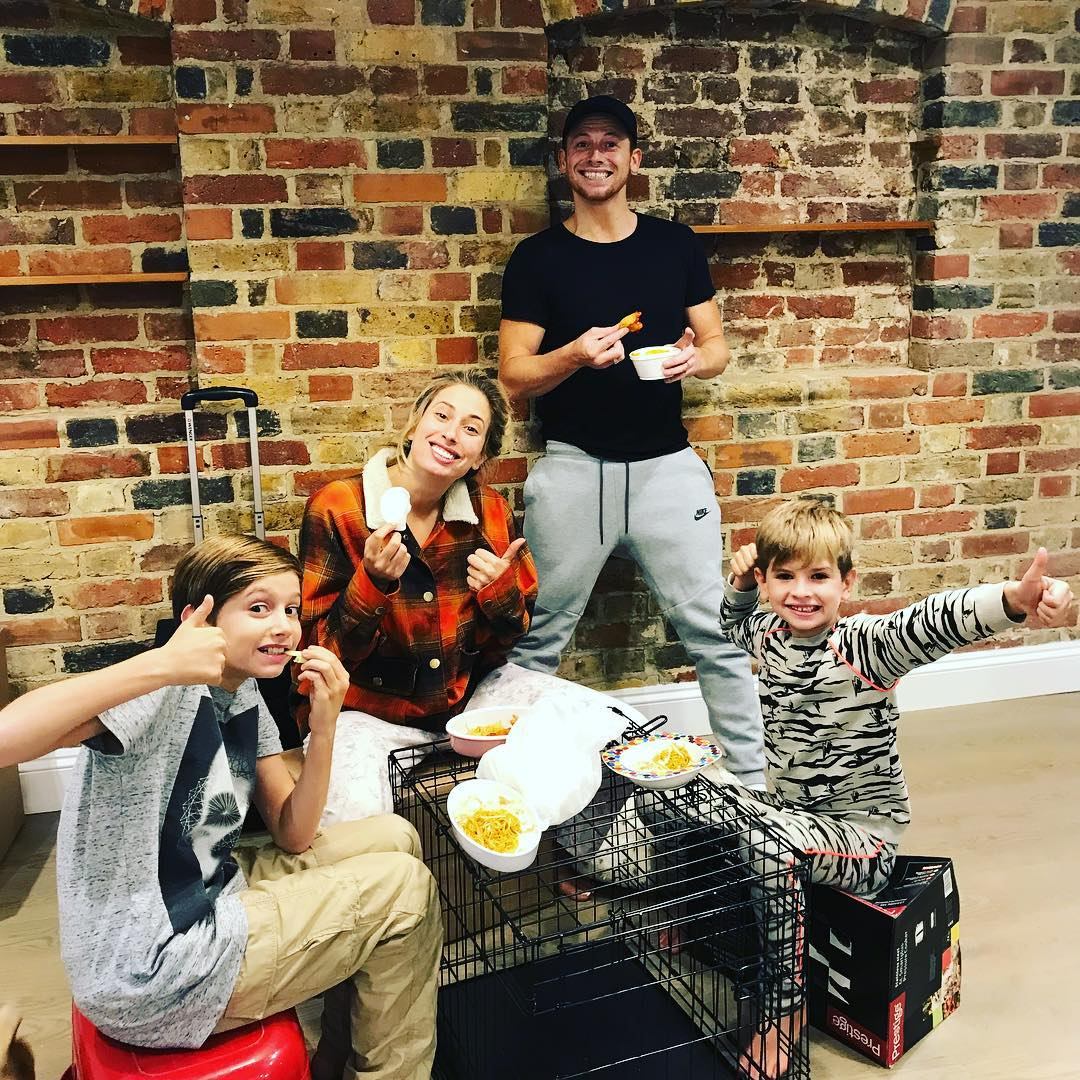 After the court’s ruling, Joe’s relationship with his son has flourished and Harry has become part of a blended family.

The Loose Women panellist also has children from previous relationships Zachary, 13, with her ex Dean Cox, and Leighton, nine, with her ex Aaron Barham.

“We couldn’t be more blended if you tried,” he said.

“And like you said, it is tricky. It’s not straightforward.

“There’s lot of people to take into consideration. Some of them people might not be as reasonable as other people, you know, so it’s a constant minefield of trying to juggle and keep all the parties happy.”

“They are the ultimate example of how to do a blended family”, one source tells Fabulous, “With Stacey’s previous two kids and Joe’s as well, they have managed to make it work so well.”

Taking to Instagram, Joe admitted he was in awe of his girlfriend and “witnessed the impossible” as Stacey gave birth.

And the family had now got even bigger, with Stacey and Joe’s baby daughter having arrived in October.

Since moving in with his now fiancee, Joe has left his bachelor past behind and has fully embraced his role as a dad and stepdad.

According to sources Joe has become the “ultimate family man”, delighting in doing the school run and whipping up three meals a day for his growing family. 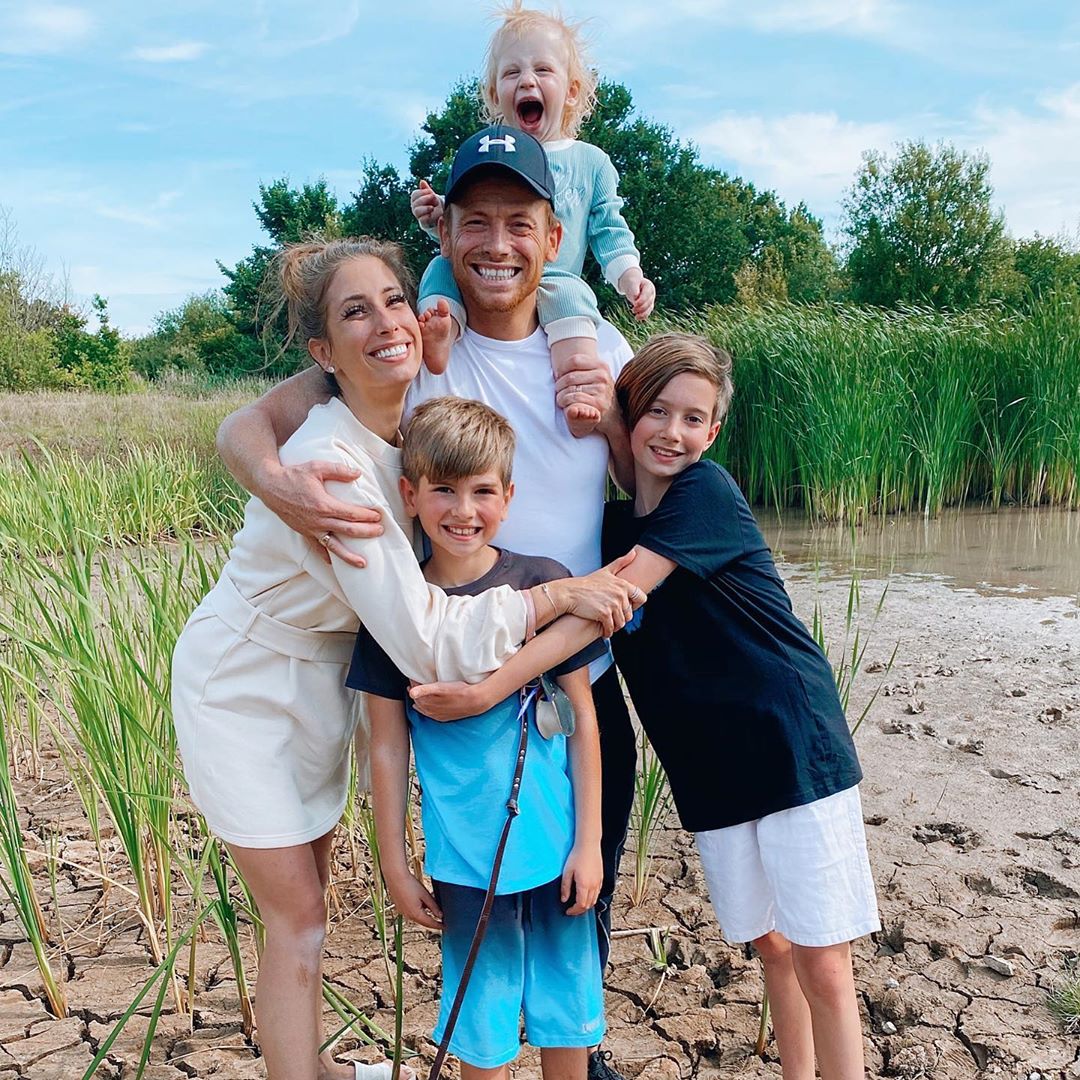 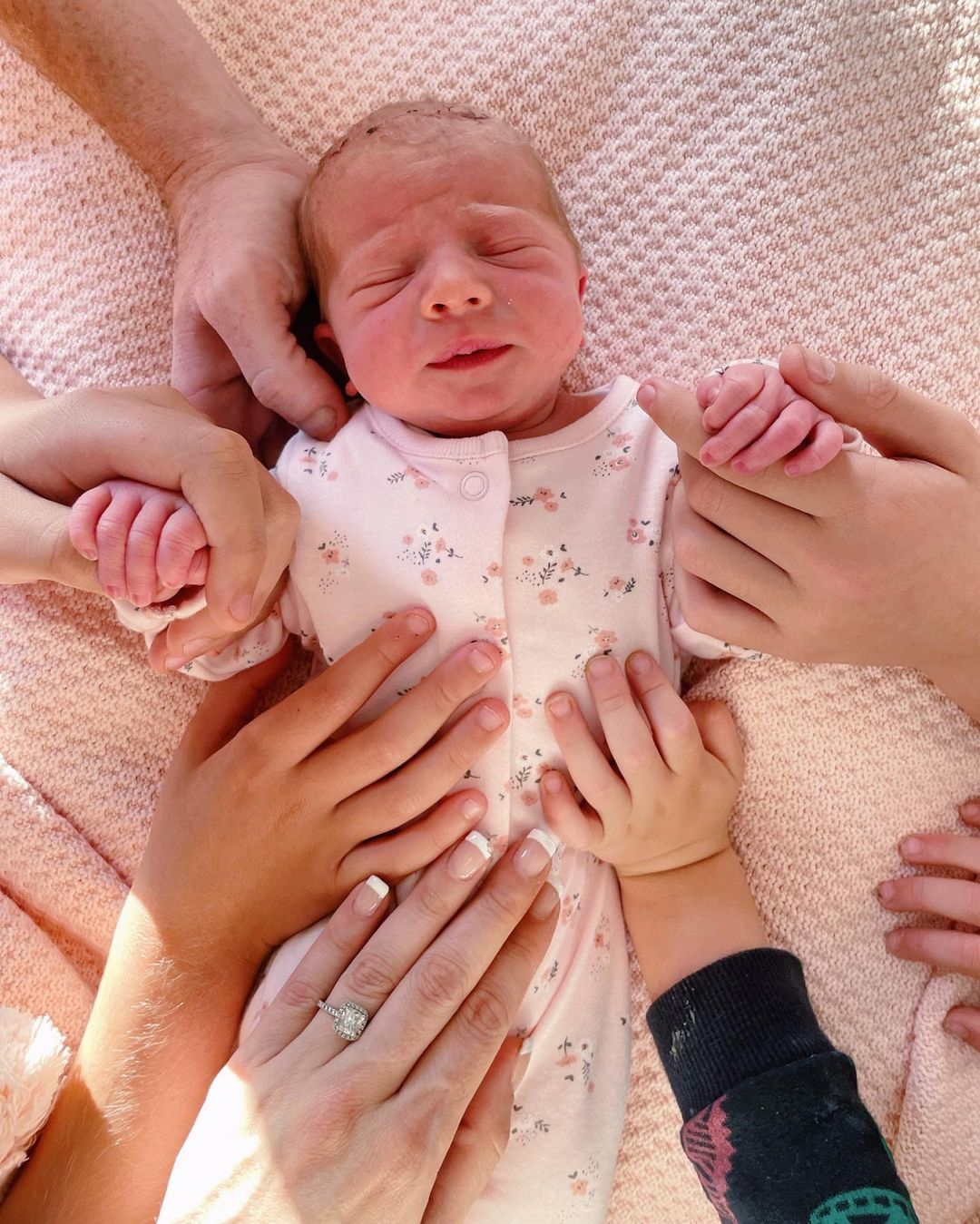 “He is a great Dad to all the kids,” the source adds, “With all the children at different ages, they are his world and so is Stacey.

“Joe puts so much effort into making them all happy but he’s so chuffed with the new arrival as he has always wanted a girl.”

Ever since appearing on Masterchef Joe has honed his skills in the kitchen a pal told us “Joe’s a great cook, or at least he says he is. He always cooks for Stacey and their boy Rex though.”

And with their new daughter, who arrived on Stacey’s October 4 birthday, Joe says he is expecting to be running Christmas this year, with sources claiming that “Joe is her rock that will always step up.”

They add: “It’s that kind of thinking that makes them the perfect partners.

“Stacey would rather think through any unforeseen circumstances and Joe is usually right on hand to come up with a solution.”

In December 2020, Stacey revealed her long-time boyfriend proposed with a huge diamond ring on a walk in the woods.

She posted a picture of her flashing the ring, overcome with emotion, as she lay back on a huge bunch of flowers.

Stacey explained how Joe popped the question while on a walk in the woods opposite their house with her two sons and their child Rex.

The star wrote: “He asked me to marry him and after crying for what felt like a very long time… I said yes” adding emojis of a heart and diamond ring. 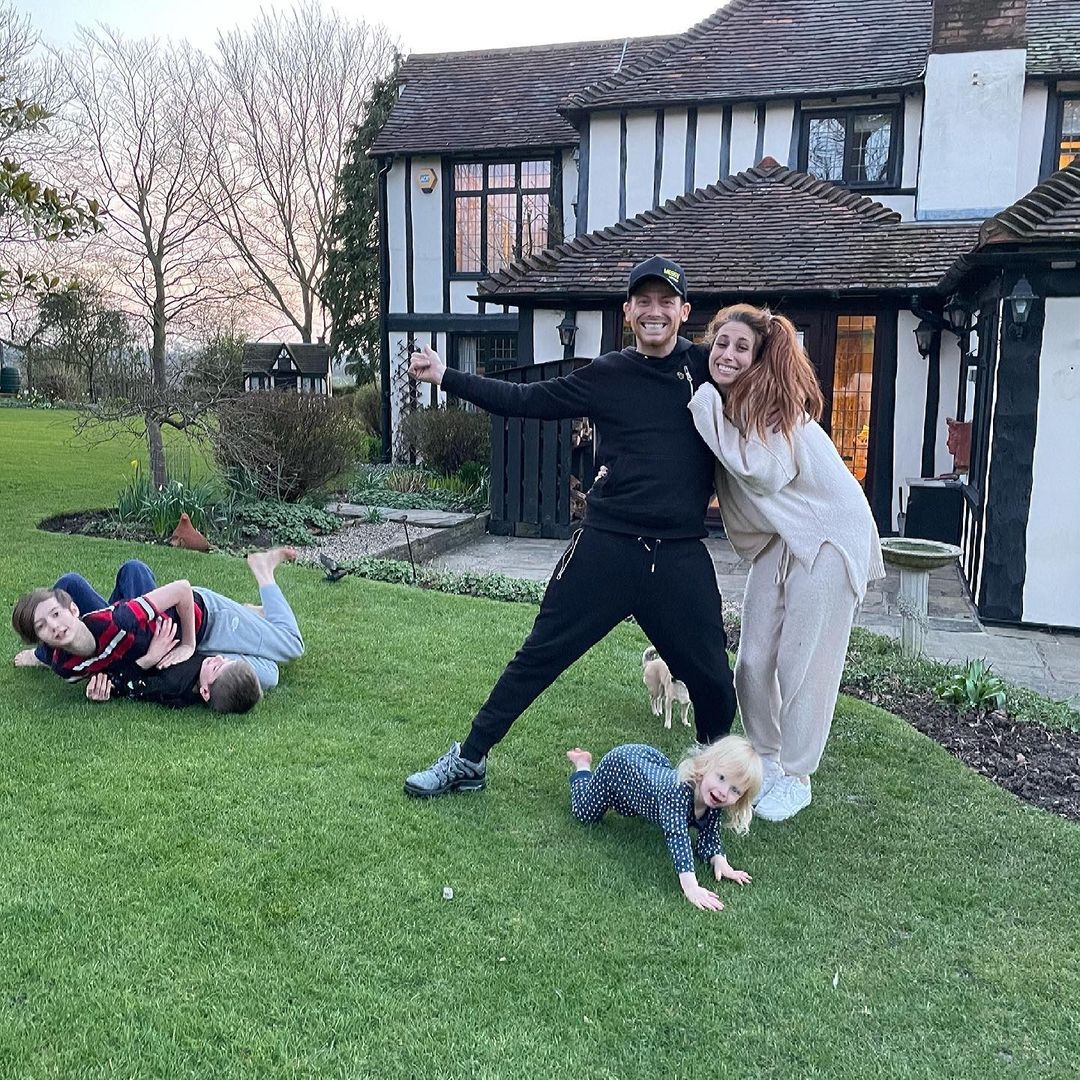 The family moved into Pickle Cottage in MarchCredit: Instagram 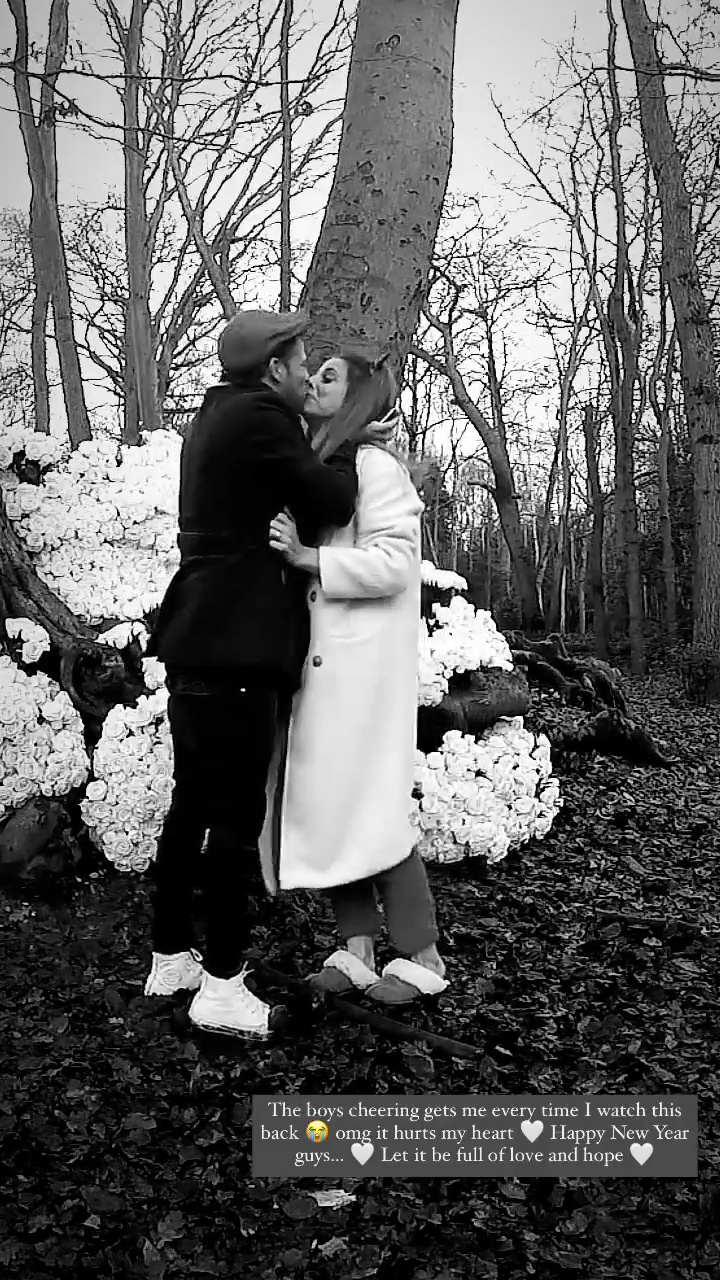 She then added a personal message to Joe: “To the moon and back bub. I have no words ? ?.”

And in March this year, the couple and their family moved into their £1.2million Essex house.

The Tap To Tidy author captioned her photo with a gushing tribute to her family, writing: “? Home Sweet Home ? And so a new chapter begins ? We can not even describe how strange it feels that this is home. ?

“Never in a million years did we ever think this would be. We feel so lucky and are so grateful to have found this hidden treasure closer to our family and further out.

“We can’t wait to fill it with love and give it our everything. To raise our family here. And to just start a fresh. I’m very emotional for some reason. It still hasn’t sunk in and doesn’t quite feel real.”

In other showbiz news, we showed you inside David Seaman & Frankie Poultney’s relationship.

And Jacqueline Jossa has revealed why she doesn’t need to justify her marriage to anyone.