Remembering their great-grandfather. Prince William and Duchess Kate are helping their children understand the death of Prince Philip.

While grieving for his late grandfather, the Duke of Cambridge, 38, has also had to explain the situation to his Prince George, 7, Princess Charlotte, 5, and Prince Louis, 2. “William told George, Charlotte and Louis that Prince Philip has ‘gone to heaven’ and ‘is an angel now,’” a royal insider told Us Weekly exclusively. “They’re still so young so he and Kate wanted to let them down gently.” 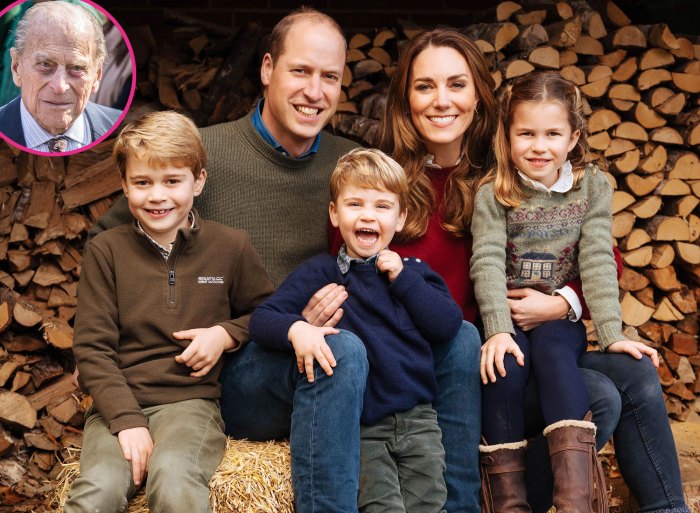 Days after Philip’s passing, Prince William shared a never-before-seen photo of his oldest son with the Duke of Edinburgh, who died on Friday, April 9, at 99. “I will never take for granted the special memories my children will always have of their great-grandpa coming to collect them in his carriage and seeing for themselves his infectious sense of adventure as well as his mischievous sense of humour!” he said in a statement on Monday, April 12.

According to the source, the younger royals have not been unaffected by their great-grandfather’s passing. “Naturally, the children are very upset, particularly George and Charlotte,” added the insider. “Louis is still very young and had only met Prince Philip a couple of times.”

Still, William and the Duchess of Cambridge, 39, have been finding ways for their children to remember Queen Elizabeth II’s husband of over 70 years. “George, Charlotte and Louis helped William choose a photograph of Prince Philip to hang in their home in memory of him,” the source shared.

The prince has previously spoken about how valuable it is for his kids to be able to speak to him about their feelings. “Catherine and I are clear that we want both George and Charlotte to grow up feeling able to talk about their emotions,” he said in an April 2017 interview with CALMzine. “For too long there has been a taboo about talking about some important issues. If you were anxious, it’s because you were weak. If you couldn’t cope with whatever life threw at you, it’s because you were failing. Successful, strong people don’t suffer like that, do they? But of course — we all do.”

As part of his charity work with the Heads Together campaign, William emphasized the importance of paying attention to his children’s mental health as well as their physical needs. “Take a moment to ask their children how they are doing,” he said in a June 2016 Father’s Day message for the initiative. “Take the opportunity to discuss how you are coping with life and fatherhood with your wife, partner or with your friends. And know that if your son or daughter ever needs help, they need their father’s guidance and support just as much as they need their mother’s.”

The funeral for Prince Philip will be held this Saturday, April 17, at St George’s Chapel in Windsor.