The Hulu comedy Plan B, released last week, portrays a hectic weekend in the life of two South Dakota teenage girls, with the zaniness of Booksmart and Superbad-esque raunch updated for 2021. But whereas the Booksmart girls sought to party, and the teens in Superbad tried to get laid, inseparable Sunny (Kuhoo Verma) and Lupe (Victoria Moroles) have a more practical, urgent mission: obtain morning-after contraception at the nearest Planned Parenthood, three hours away after a pharmacist invokes the state’s “conscience clause” to deny the “Plan B” pill to 17-year-old Sunny – an obscure barrier to reproductive healthcare writers / high school friends Joshua Levy and Prathiksha Srinivasan pulled directly from real life.

The film’s structure – two yin-yang best friends careening through the obstacle course that is America’s reproductive healthcare system, potholed with extra hijinks played for laughs – is remarkably similar to HBO Max’s 2020 film Unpregnant, co-written and directed by Rachel Lee Goldenberg and based on the 2019 YA book by Ted Caplan and Jenni Hendriks. That film follows two high schoolers who hit the road to find the closest abortion provider that doesn’t require parental consent for a minor (a 14-hour drive from their home town of Columbia, Missouri, to Albuquerque, New Mexico). Veronica (Haley Lu Richardson) and Bailey’s (Barbie Ferreira) hilarious, fundamentally unnecessary journey mirrors that of pregnant Autumn (Sidney Flanigan) and her best friend/cousin Skylar (Talia Ryder) in Eliza Hittman’s Never Rarely Sometimes Always, released in theaters last year and now streaming on HBO Max. A clenched, somber drama, Never Rarely Sometimes Always is the tonal opposite of Unpregnant and Plan B, but the scope and stakes are essentially the same: Autumn and Skylar journey to a Planned Parenthood in New York City from their rural Pennsylvania town, where the only reproductive healthcare available is a crisis pregnancy center that deceptively counsels against “abortion-mindedness.”

Call it the reproductive rights road-trip mini-genre: against the backdrop on eclipsing abortion access in the US – a wave of extreme, unconstitutional abortion bans in 2019, state-level restrictions which closed nearly a quarter of abortion clinics by 2016, a tense battle over the single remaining clinic in Missouri – these three films are promising outliers in depicting the reality of abortion in the US, whose barriers to access remain under-represented in film and TV. All three take, for once, the validity of a teenage girl’s decision to end a pregnancy as a given; the dramatic tension is not whether the character will decide to go through with an abortion but if she’s able to given the hurdles, both comically inane and devastatingly prohibitive, to reproductive healthcare in the US.

It’s a welcome shift in focus for a topic long under-played or over-dramatized on-screen. Ever since the CBS sitcom Maude became the first TV primetime abortion storyline (for its 47-year-old main character, played by Bea Arthur) in 1972, the year before Roe v Wade, abortion has been a fraught topic for film and TV, often met with backlash. On TV, especially teen soaps such as Degrassi, Dawson’s Creek, or Party of Five, the plot often hinged on the woman’s decision, portrayed as anguished for herself and others. Most TV women who contemplated abortion eventually decided, at the last minute, to keep the baby (Dawson’s Creek, Beverly Hills, 90210, The OC, which backed away from even using the word “abortion” on-air), even if they made it to a clinician (Sex and the City, Felicity), prompting the New York Times’ Kate Aurthur to call abortion in 2004 “television’s most persistent taboo”.

The same was generally true for movies in the 90s and 2000s, which depicted the ending of unwanted pregnancy as agonizing, if it was considered it at all. Think Knocked Up, whose plot hinged on Katherine Heigl’s type-A Alison not even considering ending an unintended pregnancy from a one-night stand, Waitress, or Oscar-nominated Juno, whose protagonist balks at an abortion once a classmate dubiously informs her the fetus has fingernails.

In the past 15 years, storylines have shifted toward abortion as an unchallenged, positive health decision for TV characters, ironically as restrictions on abortion providers have abounded; of the 1,300 abortion restrictions enacted in the nearly half-century since Roe v Wade, a stunning 43% were passed in just the last decade. It hasn’t been without controversy – primetime abortion storylines in a 2011 episode of Grey’s Anatomy and a 2010 episode of Friday Night Lights (the rare episode to depict abortion restrictions – in this case, Texas’s mandatory waiting period for a 16-year-old character), were the subject of tense debate between show writers/creators and network Broadcast Standards and Practices.

It’s only in recent years, against the backdrop of a coordinated legislative crackdown on abortion access, that what Jezebel has termed the “chill abortion” – abortion depicted, accurately, as a medical decision personal to each woman – became unremarkable on TV. In Jane the Virgin season 3, for example, Jane’s mother, Xo, a woman in her 40s, gets an abortion following a romantic fling; the first episode of Hulu’s Shrill finds Annie (Aidy Bryant) receiving an abortion at Planned Parenthood, that’s barely mentioned again. There were also relatively un-dramatic abortion plotlines on Scandal, Claws, GLOW, Sex Education, Dear White People, Euphoria and, a few years back, Girls.

While depictions of abortion have proliferated, to an extent, on television, film has been slower on the uptake, with the exception of last year; according to Abortion Onscreen, a project run by reproductive health researchers at the University of California at San Francisco, 13 movies released in 2020 depicted or discussed abortion (compared to three in 2019), the most in a single year to date. (As in television, representation skewed disproportionately white, though women of color comprise the majority of abortion patients in the US.) This includes Unpregnant and Never Rarely Sometimes Always, as well as Alex Thompson’s independent film Saint Frances, which treats a 34-year-old deciding to end a surprise pregnancy with sensitivity that doesn’t overshadow her complexity as a character – the guilt that Bridget (writer Kelly O’Sullivan) feels is conflated with her career stagnancy and fluctuating self-worth. (An unvarnished scene of cramps and blood clots is also one of the very few film/TV depictions of medication abortion, an increasingly common method for women in the US.)

Not all depictions skew even lightly pro-choice; the anti-choice propaganda film Unplanned featured a gory portrayal of a 13-week-old fetus “twisting and fighting for its life,” according to protagonist Abby – a depiction numerous medical experts deemed inaccurate and misleading. The film sold out theaters across the country and grossed $19m domestically. The drama Roe v Wade, produced by the siloed conservative Hollywood ecosystem and released this March, features numerous rightwing celebrities including Jon Voight, Stacey Dash and Tomi Lahren falsely discrediting the 1973 ruling.

The “chill abortion” TV trope works to neutralizes the hysteria of anti-choice scare tactics by normalizing the experience of abortion as uncomplicated and uncontested, but it’s often out of step with the decidedly unchill hurdles to abortion in the US, from cost to distance (it could be a half-day drive to the nearest clinic) to mandatory waiting periods. Unpregnant, Plan B, and Never Sometimes Rarely Always reflect an increasingly hostile landscape for reproductive rights in the US – since January, 15 state legislatures have enacted 70 restrictions, including 10 outright abortion bans. Last month, Republicans in Texas passed a law that would allow a private citizen to sue people who help others obtain an abortion past six weeks. Twenty-nine states, where 58% of American women of reproductive age live, are considered hostile to reproductive rights. The supreme court is preparing to hear a case on behalf of Mississippi’s sole remaining abortion clinic that presents the most serious challenge to Roe in decades – a culmination of conservative extremism given outsize legislative import through Republican-led voting restrictions and partisan gerrymandering. 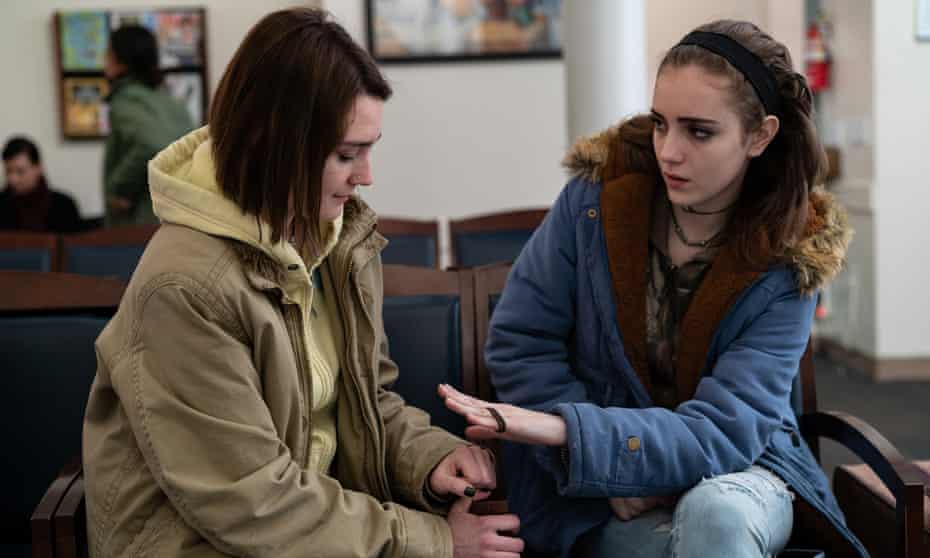 That broader context doesn’t explicitly enter the frame in these films, save for a rousing, exasperated speech – “why the hell do you need to get parental consent to have an abortion but not to actually birth a human child? Fuck you, Missouri state legislature!” – delivered in Unpregnant by Veronica, who has (unrealistically) endured a car chase. Instead, all three films hew closely to the characters’ bafflement and frustration, as well as the mundanity and well-researched specifics of reproductive care once the abortion appointment / emergency contraceptive is finally secured. Never Rarely Sometimes Always takes it name from the prescribed answers on a clinical intake form at a real Planned Parenthood in Manhattan, whose questions – “has anyone made you have sex against your will?” – do much more to reveal Autumn’s internal conflict and pain than any line justifying her decision.

For the most part, these characters want what most teenage girls do: to feel safe, to feel seen, to get on with their lives. As she searches for the morning-after pill, Sunny is furious, flustered, scared, confused; she’s also annoyed, hungry, pissed off at her best friend for convincing her to host a party and crushing on a cute guy from class. Autumn and Skylar are miserable, vulnerable, terrified, and also delighted by a bakery in the big city, buoyed by trust in each other. Bailey and Veronica scream along to Since U Been Gone and patch together a tattered friendship. It’s a romp with a pointed barb: if even one of the status quo’s primary beneficiaries – a white girl like Veronica, affluent (and conservative) parents on speed-dial – struggles to get a chill abortion, things are probably deranged.

It’s too early to tell whether the reproductive roadtrip film boom is a fluke of timing or a genuine shift in perspective, and opportunities for female writers/directors. But it’s clear that in 2021, the barriers to reproductive healthcare in the US are so much a part of the American context that it’s malleable into three distinct films – and with a likely bitter fight ahead, there’s plenty of material for a burgeoning genre of films placing the burden of abortion not on female characters, but the healthcare system made unduly hostile to them.