HOLLY Willoughby squealed in terror as she was forced to put her hand into a Halloween themed tombola during This Morning’s Spin To Win.

The TV host wretched as she spun the fairground game, which had been filled with the prize winning balls and a congealed mix of fake blood and guts.

Holly didn’t look pleased to be sticking her hand in the spooky tombolaCredit: ITV 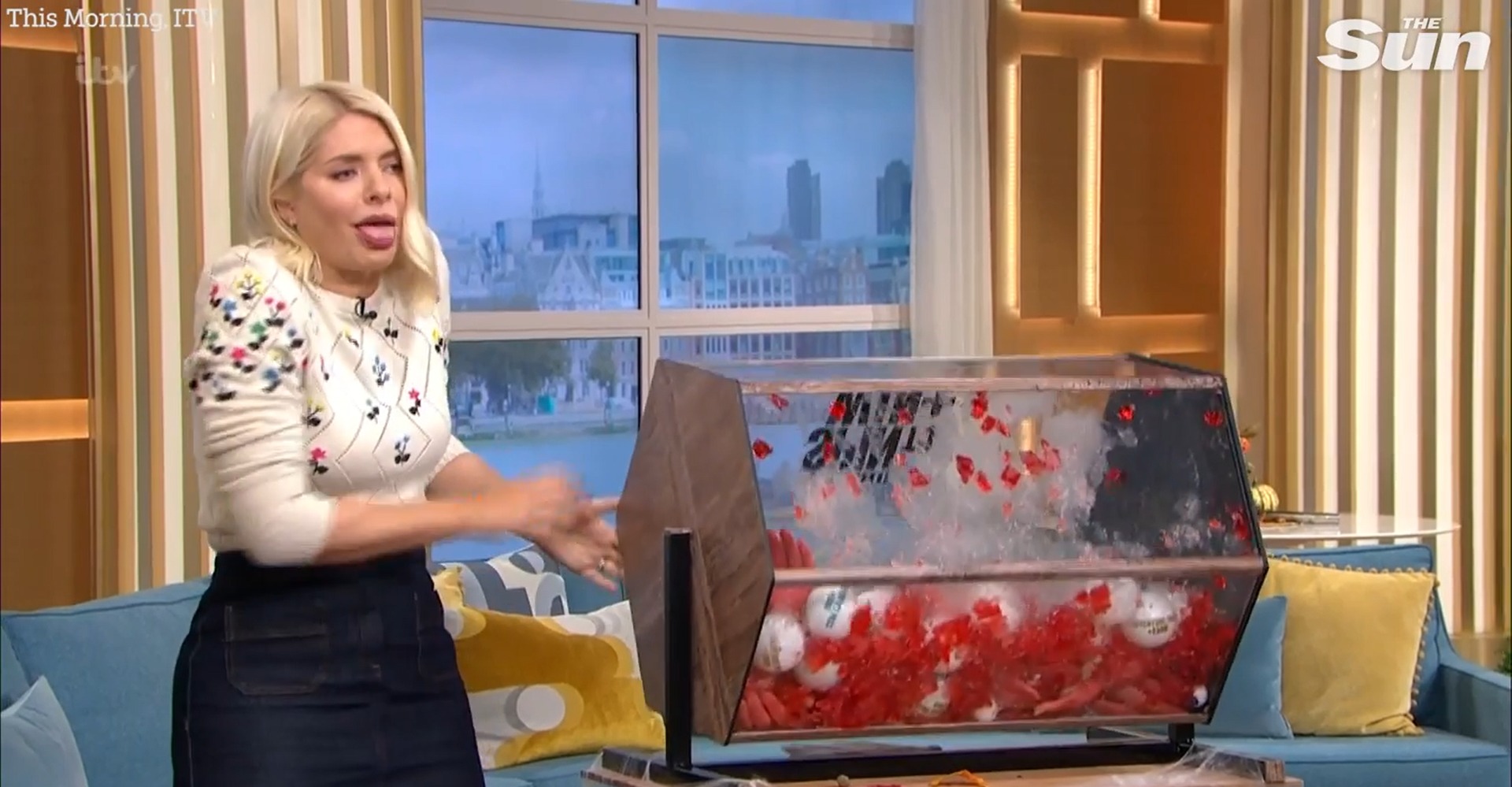 After chatting with the contestant on the phone line, Holly, 40, went to spin the iconic ITV tombola to give the woman a chance to win some cash.

But as she tried to spin the machine it swiftly came to a halt due to the heavy mix of fake body parts, blood and guts inside it.

Crew members laughed in the background as co-host Phillip Schofield explained: “Oh, they are all stuck in a great big congealed pile.”

Holly began to wretch as she opened the spinning cage to take out one of the prize-winning balls, tentatively placing her hand in and reaching down slowly.

“This is so dsigusitng,” she exclaimed between gags, before continuing between helpless whimpers: “If something holds my hand in here I’m going to…”

She finally was able to pull out a ball, announcing to the winner at home they had won an “interesting adventure pass and £800” – the same as the previous prize.

Diving back in, Holly insisted she wanted to look for a different prize for the viewer back home, and squealed as she pulled out a second ball.

She quickly realised producers had filled the tombola with the same prize multiple times to force the mother-of-three to keep putting her hand back inside.

Laughing hysterically as she went for a third try, Phil exclaimed: “Keep going! Oh, she’s going to pee herself now! Bring the bag down!”

Holly was able to pull out the £1000 ball for contestant Sarah, who remained quiet on the end of the phoneline as the presenters lost control of their giggles.

This Morning’s Spin To Win segment frequently finds itself descending into chaos – as Holly was left screaming at contestants during Monday’s game.

The competition begins with entrants answering the phone with a special password, but not a single one of them did.

After a string of players answered the call by saying “Hello?” – a move that spells instant disqualification – Holly was left fuming.

After the first one failed to say the password, she snapped: “Goodbye. Clear off, wasting our time picking up and saying hello. What are you doing?”

The next call cut off with Holly asking: “What was that little ping? Next. Did somebody hang up on us?”

But when the third caller answered with a “hello” Holly fully screamed.

Throwing her hands up in the air she said: “Jacqui, I just screamed at you. Useless, Jacqui.”

The next didn’t answer and the final caller, Becca, also failed to give the password meaning the show had passed without a single game of Spin To Win.

If any of the callers had said the password correctly they would have had the chance at a cash prize on the spin of the giant wheel.

Usually Phillip is the host who gets most angry at callers for failing to answer, with Holly often acting as the voice of reason. 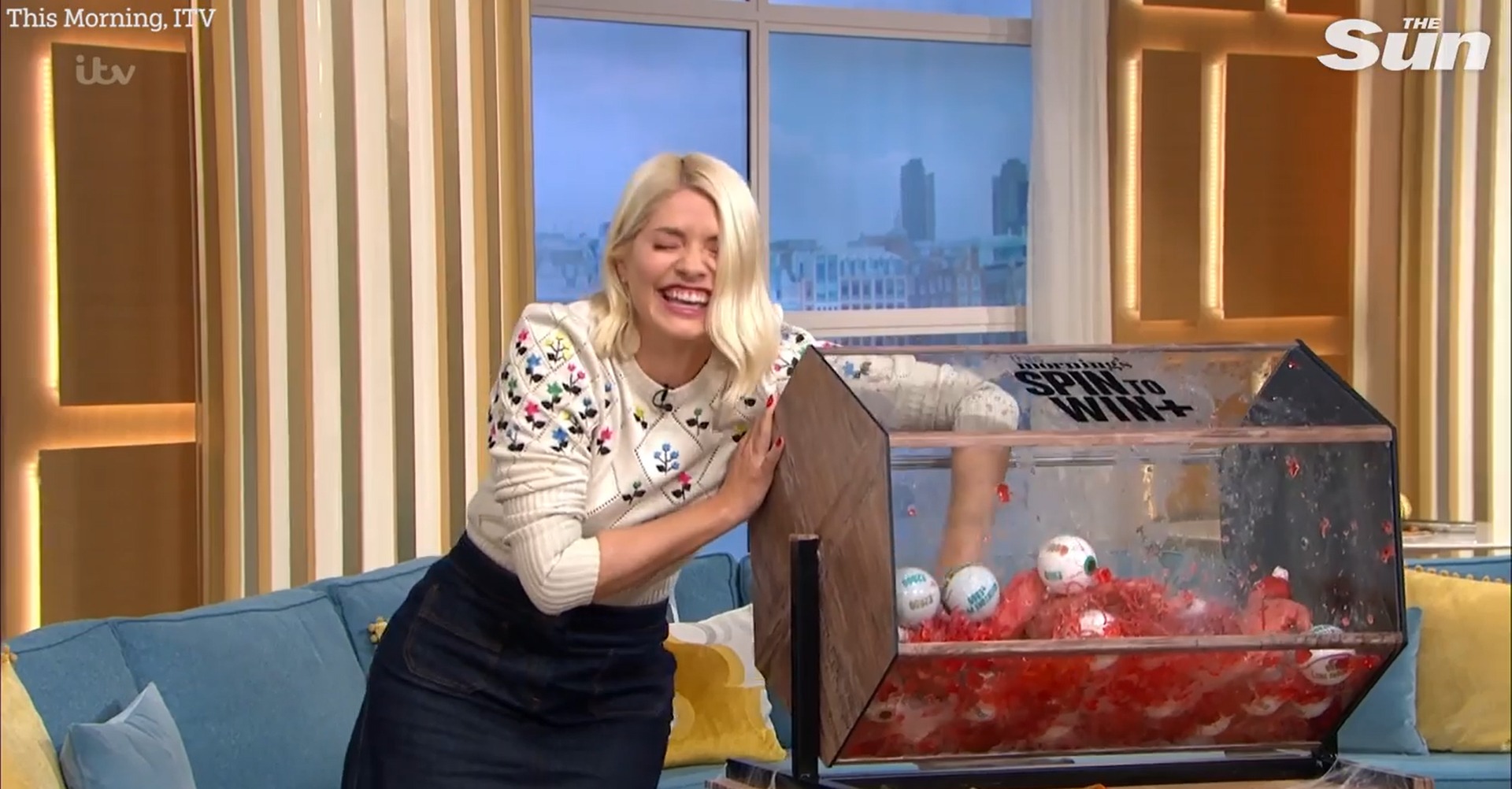 Holly couldn’t stop laughing at one point during the game