Holly Willoughby was left feeling a little queasy on This Morning when she was asked to eat from a dog bowl during a segment.

Phillip Schofield was seen rushing off to grab a mask in case she was sick during today’s show, where they learned how to ‘Dine With Your Dog’.

Covering her mouth, Holly was seen trying to push through as she was explained the rise in dog ownership has resulted in a dog food shortage.

Raw food brand creator Dylan Watkins has therefore come up with a solution of human food alternatives for your pet with Poppy’s Picnic dishes, where owners able to eat the equivalent alongside them.

For their three course meal, Phillip and Holly were given Lady and The Tramp Meatballs, yoghurt-coated fruit, Chicken Goujons and a Breakfast Smoothie – all fit for human consumption and served in dog bowls.

While Holly enjoyed the idea of the food, the idea of eating from a dog bowl left her ‘feeling a little funny’ and it was made worse when Dylan started talking about pooch Poppy’s poo quality while discussing the menu. 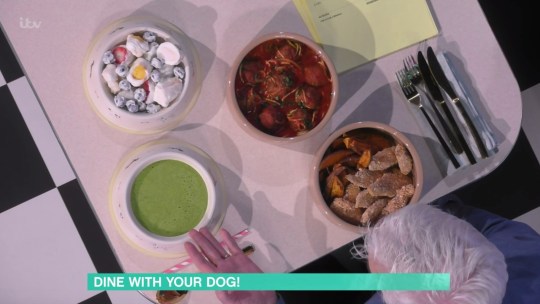 ‘I once shared a yoghurt with my cat when I was a kid, so I’ve have shared food with animals,’ Holly explained.

Phillip, on the other hand, looked completely undeterred and even buried his head in the bowl and ate straight from it like a dog. 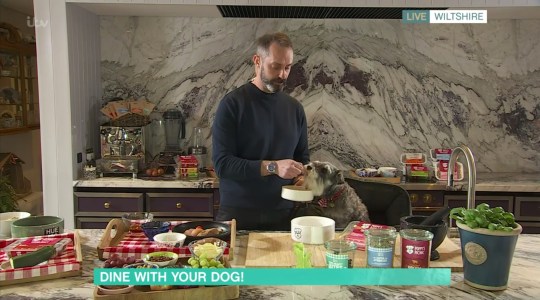 Dylan and Poppy left their mark on the show (Picture: ITV) 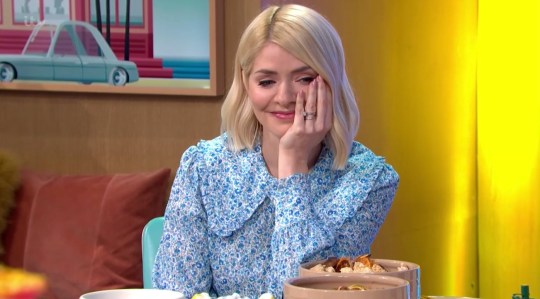 ‘Her breath changed when I started making my recipes many years ago, and also her fur, her coat, everything changes for the better,’ Dylan explained of his business venture.

‘The main thing was, her poos. Poppy’s like a seven kilo dog, so she when she used to poo it was like a heap of poo here. But when she poos on a raw diet, it’s like the size of a thumb. It’s also rock hard.

‘There’s no smell, and if it did happen in the house, it’s easy to pick up there’s no stickiness. So a raw fed diet does change the dog’s metabolism completely. It’s feeding the food that they should be eating.’

This Morning airs weekdays from 10am on ITV.