Prince Harry and Meghan Markle had a plan in place just in case Prince Philip died before their CBS tell-all aired on March 7.

Journalist Gayle King revealed during CBS This Morning on Tuesday, March 16, that the Suits alum, 36, and Harry, 36, filmed the interview before the Duke of Edinburgh, 99, was admitted to the hospital.

“If something, God forbid, had happened to him, the interview would not have run at this particular time,” King, 66, said. “But the interview was done and was scheduled before he went into the hospital. But a lot of people have raised that point. 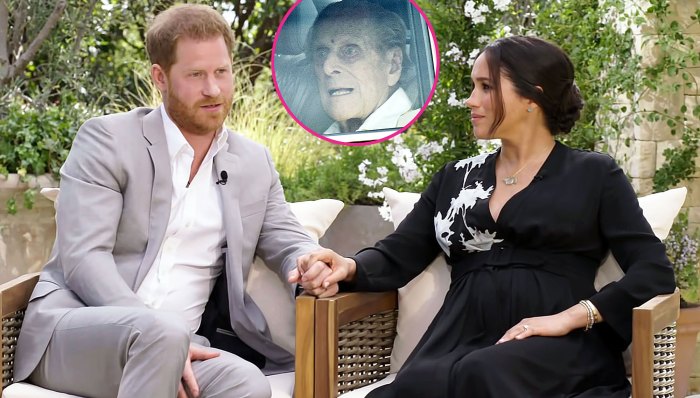 Philip was released from the hospital on Tuesday, March 16, and returned home to Windsor Castle following a successful surgery and treatment for an infection. He was hospitalized for a total of 28 days.

“The Duke of Edinburgh has today been discharged from King Edward VII’s Hospital and has returned to Windsor Castle, following treatment for an infection and a successful procedure for a preexisting condition,” Buckingham Palace said in a statement on Tuesday. “His Royal Highness wishes to thank all the medical staff who looked after him at both Kind Edward VII’s Hospital and St. Bartholomew’s Hospital and everyone who has sent their good wishes.”

Philip was not mentioned during Harry and Meghan’s interview. His wife, Queen Elizabeth II, however was. The couple maintained that the monarch, 94, was kind to them and their son, Archie, but alleged that they were treated unfairly by others in the royal household and experienced racism.

“She has barely had any time to herself since the interview and has been in constant crisis meetings,” an insider told Us Weekly of the monarch. The queen did not watch the special, but the source said she was “thoroughly briefed” on the allegations made.

“The queen has always had a soft spot for Harry and looked out for him, so [she] is incredibly hurt and shocked that it has come to this,” the insider told Us. “She’s trying to be understanding and see things from Harry’s perspective, but the allegations he and Meghan have made are hard for her to digest. The interview has wreaked havoc on the royal family.”

During the sit-down, the British Royal Army vet and the former actress alleged that they experienced mistreatment and racism before they stepped down as senior members of the royal family. Buckingham Palace responded in a statement two days after the interview aired, calling the claims “concerning” and promising to look into them. King, however, said that has not happened yet.