Hailey, 25, debated whether bachelorette parties should be more “romantic” or “kinky” during the latest installment of her “Who’s in My Bathroom?” YouTube series while building bouquets with Rosie Huntington-Whiteley.

When Hailey reminded her guest that she was already legally married before the September 2019 ceremony, the Mad Max: Fury Road actress laughed out loud. “You already had the d–k!” Huntington-Whiteley exclaimed.

The former Drop the Mic cohost celebrated with her sister, Alia Baldwin, BFF Kendall Jenner and more at the NSFW bash in West Hollywood. At the time, an Instagram Story video taken by wardrobe stylist Maeve Reilly showed Hailey and Jenner, 26, hugging at a dinner table.

The “Peaches” crooner, 27, initially dated his now-wife from December 2015 to January 2016 before they reconciled in June 2018 following the end of his on-off relationship with Selena Gomez. Justin and Hailey got engaged in July 2018, marrying in a New York City courthouse just a few months later. The couple tied the knot in a more traditional ceremony in South Carolina the following year.

Earlier this year, Hailey opened up about how her relationship has transformed three years into her marriage.

“I always like to be careful when I’m giving people advice because I don’t want to come at it like I’m some expert,” she said during an interview on The Ellen DeGeneres Show in November. “I’m newly married. I got married quickly. I’m still taking it a day at a time and I’m still learning a lot.” 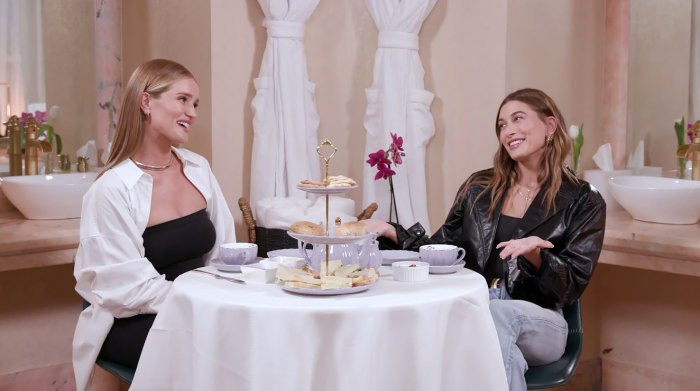 Stephen Baldwin’s daughter added: “Having the time to be on your own and having the experience to be single and just, like, travel and having had that time I think was the most important thing. That was the biggest thing for me was that I had my own life experience before I joined my whole entire life with somebody and had my own identity and comfortable in my own skin.”

The Arizona native and the Grammy winner have both been candid about the struggles they’ve faced as a married couple, with Justin admitting in April that there was a “lack of trust” between them early on.

“The first year of marriage was really tough because there was a lot going back to the trauma,” he told GQ at the time. “There was just a lack of trust. There was all these things that you don’t want to admit to the person that you’re with, because it’s scary. You don’t want to scare them off by saying, ‘I’m scared.”

Despite naysayers, the Canadian pop star felt that getting married was his “calling” after experiencing an “unstable” home life in his youth.