Thanks to Secret Cinema, the London-based immersive film experts, NME has had its leg chewed off by zombies outside a grimy hospital (28 Days Later), played poker with international spies (Casino Royale), danced the can-can in a French burlesque house (Moulin Rouge), and chased down ferocious demodogs at Hawkins’ Starcourt Mall (Stranger Things).

This week’s planet-hopping premiere of Marvel‘s Guardians Of The Galaxy was just as fun. Set among the neon-sprayed bars and hangouts of the film’s space pirates, or ‘scavengers’, it made for a sweaty, smokey thrill-ride across otherworldly terrains. We met back-stabbing burglars, sauced-up superheroes and even sang karaoke with an intergalactic drag queen. We also got to meet the Guardians themselves, who popped up throughout the night while playing out a brand-new adventure.

As all Secret Cinema aficionados will know, it pays to prepare. So after learning your pre-assigned clan’s anthem, packing the right items to trade in-world, and, of course, picking a show-stopping outfit, you should memorise our must-have guide to the best things to do (and not do) while there. Read on!

Inside the Ravager Ring at ‘Secret Cinema Presents Guardians Of The Galaxy’. CREDIT: Luke Dyson

Do bring your old CDs

Never eBay-d those worn-out Libertines albums? Well, now’s your time to shine. While in the experience, Secret Cinema-goers can trade certain ‘old world’ objects to collect units from the show’s many actors. These units add up throughout the night – and ultimately decide which clan will be crowned king of the clans at the end. For reference, NME‘s dog-eared Johnny Cash compilation took the Astral Queens from last place to second. Enrique Iglesias‘ debut album in Spanish? Not quite so valuable…

Don’t get there late

When you book your ticket, you’ll be given the option of different arrival times. Definitely choose the earliest possible. That way, there’ll be plenty of time to explore the cosmic spaceports of Knowhere and Contraxia and interact with the actors. One of the universal truths of Secret Cinema is that you’ll always wish you’d spent more of the night fully immersed in the experience, before everyone is ushered through to watch the movie in giant screening rooms. We all love watching films, but wouldn’t you rather be in one?

Do talk your way into the Collector’s private quarters

Benicio del Toro’s keeper of interstellar fauna, the Collector, is probably the coolest character in GOTG. So it was a nice surprise when we managed to sneak into his secret office. It’s located behind a guarded door in Contraxia. You’ll need to persuade said guard to let you in by telling a convincing tale about your character’s backstory, or maybe bribing them with a valuable item that their boss will want to buy. Good luck! 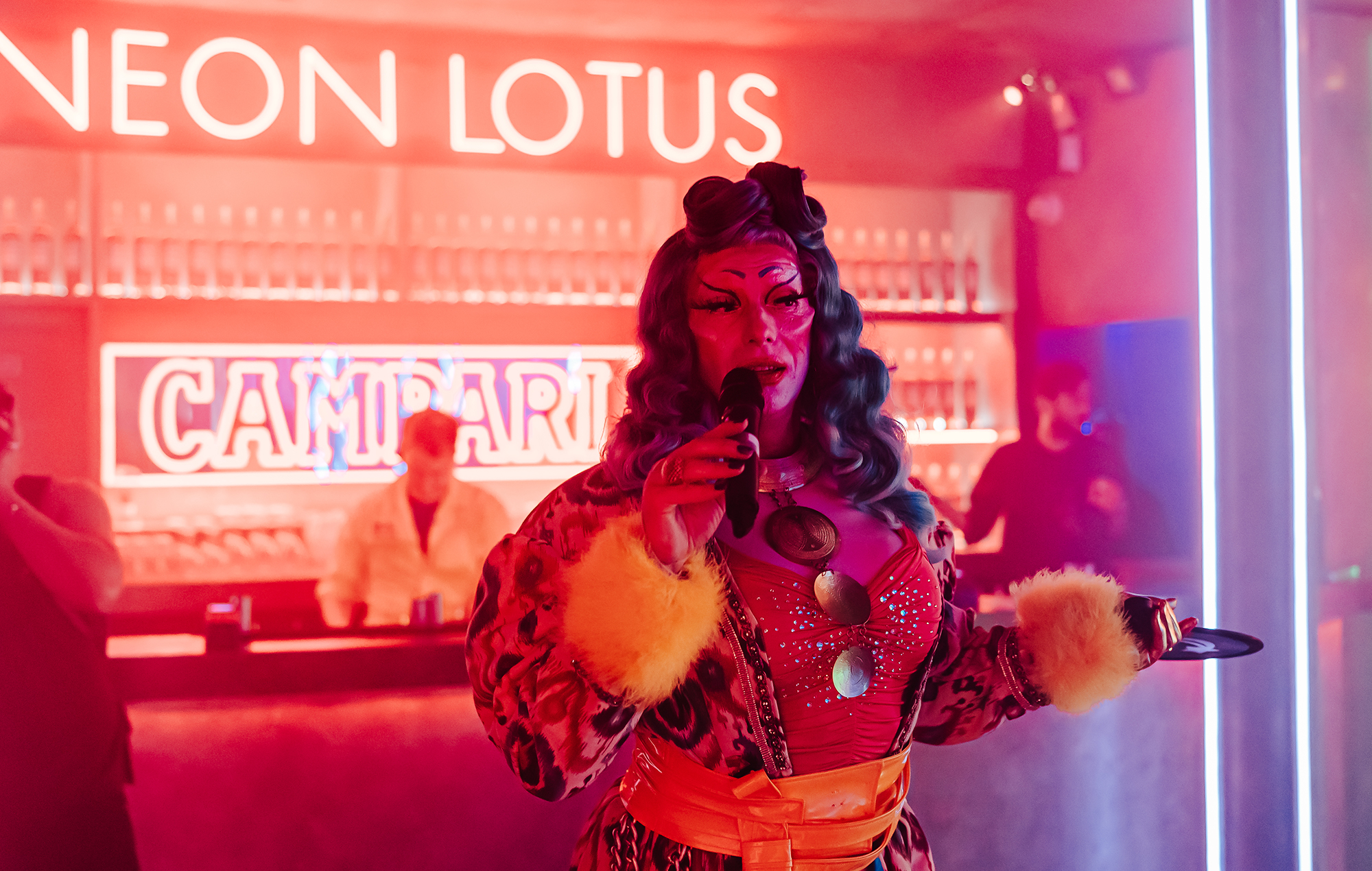 The Neon Lotus bar is not to be missed. CREDIT: Luke Dyson

By far the most happening bar around, this fluorescent, futuristic watering hole is splattered with disco paintwork and glow-in-the-dark tube lighting. It’s in the top half of Contraxia. Look for the sign of the blue lady.

Do ask about the Embers of Genesis

Capable of healing a dying planet, these super-powerful dust particles were sourced from an ancient supernova. The Collector, naturally, had them in his HQ. But when the experience starts, it turns out they’ve been nicked by an ex-convict. Do a bit of digging and you might be able to track him down and earn your clan a heap of units.

Dave Bautista’s musclebound alien is an elusive customer in Knowhere’s dodgiest dive bars, but keep your eyes peeled and you’ll be able to spot him. We caught up with Drax the Destroyer during a palm reading session, which he definitely struggled with. Famously, the big, grey boy doesn’t understand metaphors… 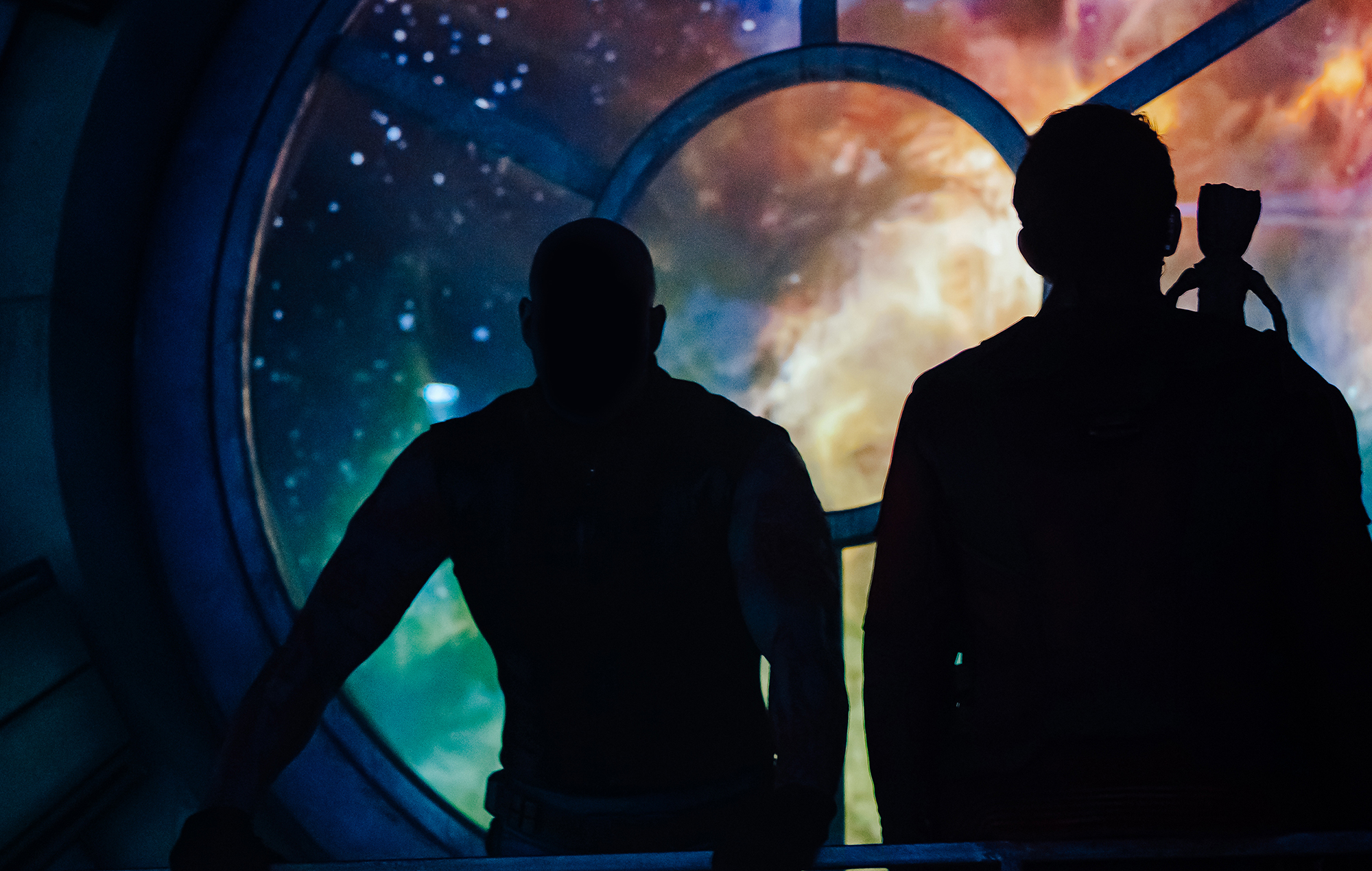 Do get a good spot for the finale

After a few hours of exploring the two biggest areas, the extra-special ending sequence will begin. You’ll want to make sure you’re in Knowhere and have snagged a vantage point that’s close to the raised walkway. From there, you’ll be able witness the jaw-dropping aerial tumbling and lasers in the longest choreographed Secret Cinema fight scene ever. Enjoy!

Bonus tip: prove your worth in the Ravager Ring

Keen to boost your credentials as a top-notch space smuggler? Then make sure you stop by the Ravager Ring in Knowhere for a spell. There are lots of Guardians-themed competitions to enter – from fast-paced dance-offs to singing contests with some familiar faces…