More drama is on the way — seriously. Grey’s Anatomy star Caterina Scorsone will be at the center of the spectacle as Dr. Amelia Shepherd going into the show’s midseason finale.

“My character in particular has a very new story line that’s happening, and it’s pretty exciting,” Scorsone, 40, told Us Weekly exclusively at the 2021 People’s Choice Awards in California on Tuesday, December 7. “There are high stakes, and we’re actually heading toward the midseason finale. We have two episodes left, and there’s a big, big situation that’s about to be unfolding.”

Fans of the ABC medical drama have been watching Amelia navigate coparenting with Link (Chris Carmack) — even though they aren’t over each other — and working on top secret research in Montana. She’s helping a team find a cure for Parkinson’s with Kai (E.R. Fightmaster), and she seems to have serious sparks with the nonbinary doctor.

After a short Thanksgiving break, Grey’s Anatomy season 18 returns on Thursday, December 9, with even more drama — and Scorsone doesn’t think viewers are ready for what’s in store next.

“I love this season. It’s really fun,” the actress dished to Us on Tuesday’s red carpet. “I don’t know how they do it, but they somehow keep reinventing it in a way that keeps the stories fresh.”

The midseason finale will find Amelia in a tough spot as Link wants to spend the holidays together with the kids. They did the same at Thanksgiving, which resulted in a steamy kiss. However, the doctors quickly snapped back to reality when they remembered that they want very different futures. 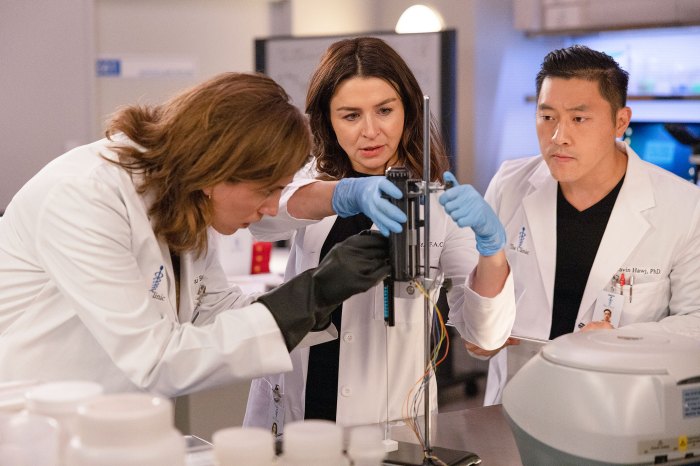 The Private Practice alum started playing the neurosurgeon in 2010 and joined Grey’s Anatomy full time in 2014. Currently in its 18th season, Scorsone doesn’t know when the show will end, but it’s obvious that fans still love the doctor drama.

“I feel Grey’s is like everyone’s family member,” she told Us. “And so, we don’t just want to get rid of our family members because they turned 18. You continue to be a part of my family. We just keep loving everybody.”

That was certainly true at this year’s People’s Choice Awards, where Grey’s Anatomy was nominated in four categories. The show took home the trophy for People’s Choice TV Show of 2021 and actress Ellen Pompeo (who plays Meredith Grey) won the Female TV Star of 2021 category.