Jesy Nelson made her performance debut as a solo artist on Friday night’s episode of the Graham Norton Show, but some fans were wondering if she lip-synced instead of using live vocals.

The singer, who announced her departure from Little Mix in December 2020, finally returned to the stage to perform her new song Boyz on the BBC One talk show.

She gave a powerful performance packed full of energy, winning applause from some viewers at home.

Jesy wore a black leather jacket and trousers for the appearance, finishing off the look with shiny purple trainers and silver necklaces.

However, despite successfully making it through the rendition, some of those watching were quick to point out they believed she was ‘lip-syncing’ during the performance.

Taking to Twitter, one wrote: ‘Not Jesy Nelson lip-syncing on the Graham Norton show!’

A follower commented: ‘Jesy Nelson lip-syncing in her debut performance, yet actually singing the CHORUS only (you can tell when she’s actually singing because she’ll sound out of breath).’

A Twitter user weighed in: ‘In fairness to Jesy Nelson, this is a better lip-sync than last night’s #DragRaceUK.’

Jesy Nelson lip syncing in her debut performance, yet actually singing the CHORUS only. (You can tell when sheâs actually singing because sheâll sound out of breath.) pic.twitter.com/mTwcsNojdc

But others were much more sympathetic towards the artist despite their suspicions, pointing out some singers don’t always perform live vocals.

One shared: ‘The knives are really out for #JesyNelson aren’t they? The poor girl can’t win. Yes, she mimed during the verses on Graham Norton but she did sing live on the chorus over the backing track. You’d think she was the first person to mime on a TV show!’ 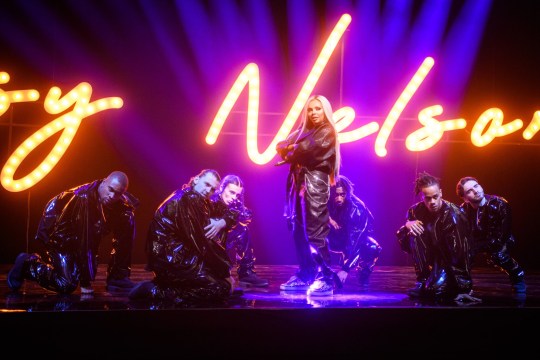 Jesy was joined by backing dancers for the performance (Picture: Matt Crossick/PA Wire)

‘Don’t get so much negativity on Jesy Nelson on Graham Norton…. performance was good, so many mime for years now why are people shocked… also weird faux outrage at 1 swear word lol #JesyNelson #GrahamNorton,’ a viewer agreed.

After finishing off her performance, host Graham asked her how she felt as she took her seat.

She responded: ‘I’m not gonna lie, that is the most I’ve ever s**t myself. That was very scary.’

Graham addressed whether it felt ‘weird’ to be ‘just Jesy Nelson’ to which the singer added: ‘A little bit but when I’ve got the dancers I feel like I’m still in a group – it still feels like family.’

Metro.co.uk has contacted representatives for Jesy Nelson for comment.

The Graham Norton Show airs Fridays at 10.35pm on BBC One.