The celeb chef, 54, recorded a special message from his home kitchen which was played after the pair’s Halloween week cha-cha-cha.

Gordon Ramsay was blown away by daughter Tilly’s cha-cha-chaCredit: BBC 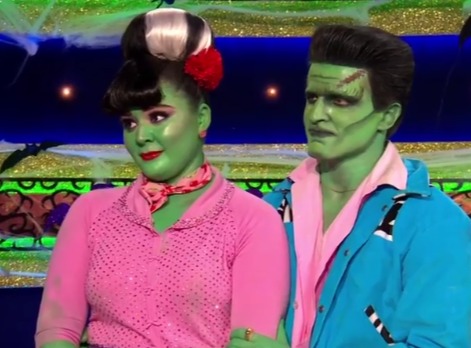 He said: “Tilly, Nikita, it’s your dad, dancing instructor extraordinaire. That performance was exceptional, and then I think about the the 45-50 hours this week that you’ve put in training. Honestly, that cha-cha-cha, Nikita, that’s what you and I have been discussing all month long.”

But he couldn’t resist ribbing Nikita for showing off a bit too much skin in his fancy dress.

He added: “One little issue, Nikita, you and I have been talking for many months now. You know Frankenstein always has his top button done up. Come on, man. Get rid of the six pack. It’s a family show. Really?”

Earlier in the week Gordon spoke of his pride in daughter Tilly for speaking out after LBC radio host Steve Allen mocked her weight.

Steve, 67, was faced with calls to quit his show on the station after branding the teenager “chubby.”

Speaking about the incident, which saw Tilly, 19, hit back in a scathing statement, Gordon said: “It made me feel very proud that she stood up and said, ‘I’m not taking this.’

“She is 19-years of age for goodness sake – bursting her a**e off and attending university by Zoom and learning the most extraordinary moves with Nikita [Kuzmin].

“I think it was a breath of fresh air that level of standing up and saying, ‘We’re not going to tolerate that.’”

Speaking during an Instagram Live interview today, Gordon, 54, went on to talk about his own struggle with his weight.

He continued: “It is a very sensitive issue whether you are a girl or a guy.

“I am someone who has always struggled with their weight.

Tilly was praised by a number of celebrities for speaking out following Allen’s comments.

The DJ was hit with 840 Ofcom complaints following his broadcast.

In a statement, Tilly said: I try not to read and listen to comments about negativity however recently being called out on a national radio station by a 67-year-old man is a step too far.

“Steve – please feel free [to] voice your opinions, however I draw the line at commenting on my appearance.

“It’s such a shame that someone is trying to make such a positive experience negative.”