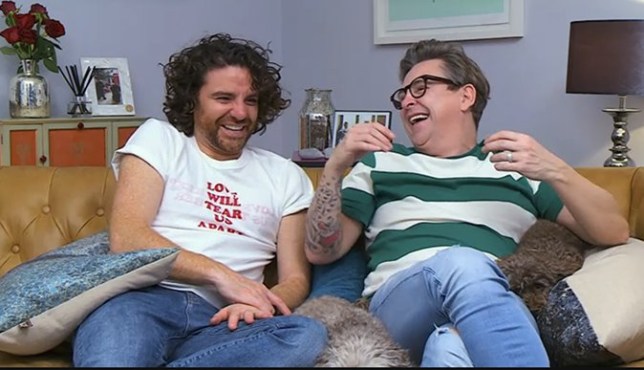 Stephen appears on Gogglebox alongside his husband (Picture: Channel 4)

Gogglebox star Stephen Webb has been a staple of the Channel 4 show since the very first series.

The hairdresser has delighted viewers with his cutting barbs and quips on all that the small-screen has to offer.

He was joined by husband Daniel Lustig on the sofa, as they gave their opinions on that week’s TV.

After tying the knot, they took the Gogglebox plunge together, and gave us a tiny glimpse into their lives.

But who are Stephen Webb and Daniel Lustig?

Stephen and husband Daniel are both hairdressers, and own a salon together in Brighton, named Lustig and Webb.

The pair announced their engagement in 2016, after the Channel 4 OG star got down on one knee during a romantic getaway to India.

Taking to Instagram recently, Stephen shared a selfie of the pair in full tourist mode in front of the Taj Mahal during the holiday.

Alongside the throwback, he penned: ‘5 years ago! How we miss being in India #engaged #tajmahal #india #memories.’

They tied the knot in a very swanky wedding in France two years later, saying their ‘I dos’ at the stunning Chateau de Lisse in Lot-et-Garonne.

Stephen used to star on Gogglebox alongside Chris Butland-Steed, however, Chris left the show in 2018 after a five year stint.

After his departure, Stephen temporarily appeared on the show alongside his mum Pat, before Daniel got in on the action.

What breed are Stephen and Daniel’s dogs?

Staniel (it works) now live in a stylish home in Brighton, joined by their three adorable dogs we sometimes get a peek at on Gogglebox.

Their Instagram pages are full of proud snaps of the pooches, including one of Babs getting a little too familiar with her dog bed…

Gogglebox continues on Fridays, at 9pm, on Channel 4.