Over the past week, the revelations that the Duke and Duchess of Sussex made to media mogul Oprah about their decision to step away as senior working members of the royal family have rocked the world.

It should therefore come as no surprise that the stars of Channel 4’s Gogglebox would react to the revelatory event, with Piers Morgan’s dramatic exit from Good Morning Britain following his controversial comments about the interview also being reviewed on the programme.

Ahead of tonight’s episode, Lee shared a video on his and Jenny’s joint Instagram account showing a behind-the-scenes peek at his pal nodding off during Meghan’s intimate chat with Oprah.

Writing in the caption: ‘Happy Friday everyone caught sleeping on the job,’ the video shows Jenny sleeping soundly on the sofa as the duchess’ voice can be heard playing faintly in the background.

But Jenny’s peaceful kip is cut short when Lee startles her awake, prompting her to exclaim: ‘Freaking hell, you frightened me to death.’ 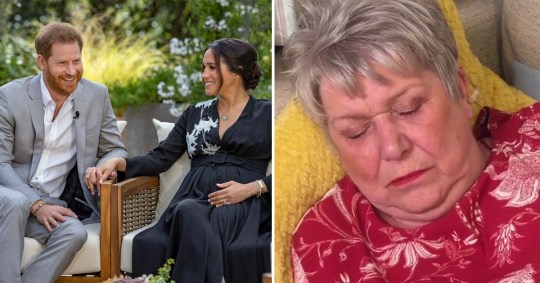 ‘I was talking to you and you just fell asleep,’ Lee says, to which Jenny responds: ‘You are a prat, you.’

Gogglebox fans were left in hysterics over Jenny’s untimely slumber, with one person commenting on the Instagram video: ‘I love you two -you always make me smile.’

‘Love these pair,’ another stated, adding: ‘They honestly have me in stitches when I watch it.’

‘U guys just make me laugh!’ someone else wrote, with a multitude of Instagram users commenting with rows of cry-laughing emojis.

While Lee may have annoyed Jenny by disturbing her nap, the pair’s friendship goes way back, having first met back in 1994 when Jenny was a landlady of a pub and Lee was a regular.

They both live in Patrington Haven caravan park in Hull and moved in together during the first lockdown of the pandemic so they could keep filming Gogglebox.

Earlier this week, Piers quit Good Morning Britain after expressing his disbelief on-air over comments Meghan made in her interview with Oprah about her mental health.

The broadcaster left the show after 41,000 people complained about his remarks, with the duchess also lodging complaints with ITV and Ofcom.