The brilliantly frank presenter, who is currently a guest host on the ITV daytime programme like Cat, didn’t hold back as he made a comment on how her takeover is going as she prepared to front her fourth installment of the week.

‘You and me are doing the same thing here, we’re both guest presenters,’ Richard said as he spoke to Cat. ‘It’s all the fun with none of the responsibility.’

‘Exactly!’ Cat exclaimed. ‘I can’t believe they’ve let me do it all week. I thought I’d get the heath home on Monday.’

‘So did I! I watched the show and it was awful!’ Richard replied as he attempted to crack a funny.

Cat immediately burst into laughter at Richard’s jibe, with Richard going on to wish the broadcaster well with her upcoming episode. 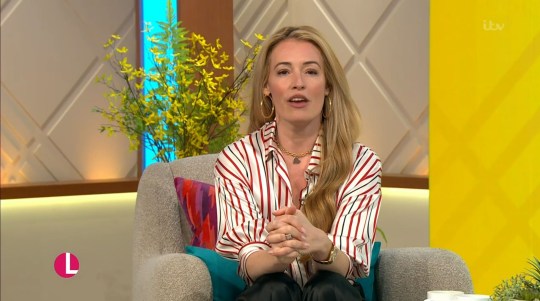 Cat has been standing in for Lorraine Kelly (Picture: ITV)

Elsewhere on today’s Good Morning Britain, Richard revealed Piers Morgan was due to go on leave from the show for two months before he quit the programme.

Former presenter Piers departed the ITV daytime show in March, just moments before he was due to take a break from the programme and travel to America.

Richard made the claims as he joined co-host Charlotte Hawkins this morning, sharing that he was originally booked in to spend the last two months at the helm until ‘that all went west’.

‘I was due to come back in April and May because Piers was going to America, so I would’ve been sitting alongside you quite a lot then, but all that went west,’ Richard said. ‘So here I am.’

Cat is currently standing in for Lorraine over the half-term break.

It’s not the first time this year she has taken over the reins on the show, having previously filled the spot over the Easter holiday.

If you’ve got a soap or TV story, video or pictures get in touch by emailing us soaps@metro.co.uk – we’d love to hear from you.

Join the community by leaving a comment below and stay updated on all things soaps on our homepage.