Lily Cole subtly criticised Richard Madeley for accusing a climate change protestor of being a hypocrite for wearing clothes during an appearance on Monday’s Good Morning Britain.

Richard was hit with Ofcom complaints following his controversial interview with Just Stop Oil protestor Miranda Wheelan in April, where he compared the Extinction Rebellion logo to Little Britain’s Vicky Pollard and blasted her own use of oil.

‘The clothes that you’re wearing to some extent owe their existence to oil,’ he said at the time.

‘There are so many ways oil impacts on your life as a protestor but you don’t acknowledge that.’

Lily, who is invested in discovering climate solutions, joined the programme to discuss the climate crisis and the cost of living crisis, and how ‘the solutions are aligning’.

Richard Madeley came under fire in April for accusing a climate change protestor of being a hypocrite for wearing clothes (Picture: Rex) 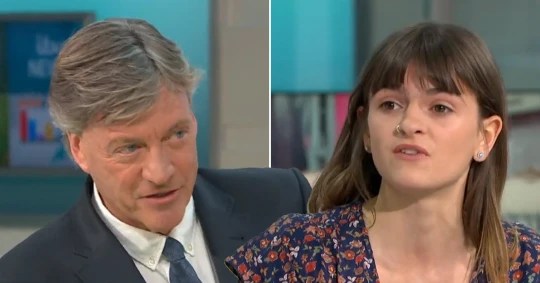 She ended her interview by inexplicitly referring to Richard’s interview and called for the media to shift attention away from individual action.

‘It’s really, really important that we don’t focus too much on individual action,’ she told presenters Charlotte Hawkins and Robert Rinder.

‘Individual action is really important to walk the talk, but the reality is that it’s impossible to be perfect.

‘If we focus on that and focus on hypocrisy, we stop having the more important conversation, which is how can we all work together, how do we create political change, how does it become easier for everyone.’

Lily continued: ‘I really want to invite the media and Good Morning Britain to really try and move the conversation away from that and into solutions.’

Richard’s Good Morning Britain interview with protestor Miranda sparked 147 complaints in April, with many viewers slamming his line of questioning on social media at the time/

Match Of The Day’s Gary Lineker was among those who spoke out, and fumed: ‘Seeing the interview in its entirety is sickening, but at the same time the bullying & patronising nature of it is getting plenty of coverage for what is the most crucial time for our future existence on this planet.

‘Only one person came out of this well & that’s Miranda Whelehan.’