Good Morning Britain presenter Alex Beresford said how a former colleague once asked him if he was ‘worried’ about what shade his child would be.

The weatherman, who clashed with Piers Morgan over Meghan Markle’s tell-all Oprah Winfrey interview last week, opened up about the racism he has encountered in the workplace in last night’s episode of Harry & Meghan: The Week That Shook The Royals.

Alex, who is a father to son Cruz, addressed Meghan’s claim that there were ‘concerns’ within the royal family ‘about how dark’ her son Archie might be when he was born.

‘I’m a mixed-race person myself,’ Alex said. ‘My son’s mother is white and I had a former colleague ask me the very question and the exact words were, “Are you worried the shade of cocoa your baby is going to come out?”

‘And the key word in that sentence is not “cocoa”, it’s “worried”.’

Alex continued: ‘Of course we’re going to wonder what features a baby will take, but you’ll have those conversations whether it’s two white parents or two black parents, right? But context is everything and they’ve led us to believe that it was said in a concerned context, which is offensive.’ 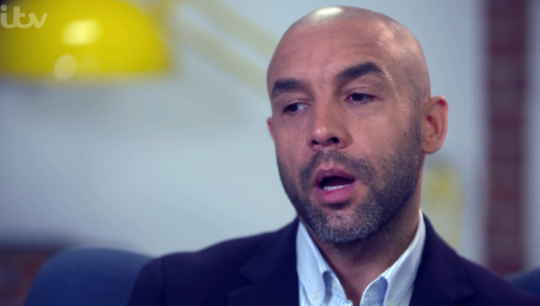 Alex Beresford opened up about the racism he endured (Picture: ITV)

Last week, Alex called out Piers as they discussed Meghan and Prince Harry’s interview with Oprah, causing Piers to storm off.

‘I understand you’ve got a personal relationship with Meghan Markle, or had one, and she cut you off,’ Alex said at the time.

‘She’s entitled to cut you off if she wants to. Has she said anything about you since she cut you off? I don’t think she has but yet you continue to trash her.’

At this point, Piers said: ‘I’m done with this. Sorry. You can trash me, mate, but not on my own show,’ while walking off set.

Later that day, it was announced that Piers had quit Good Morning Britain

‘It’s also quite hurtful when people don’t understand, don’t want to take into consideration that something happened the way that it did and also how it made you feel,’ he shared.

Harry & Meghan: The Week That Shook The Royals is available for catch-up on the ITV Hub.