Celebrity Bake Off viewers were left less than impressed after contestant Tracy-Ann Oberman repeatedly got one of her hero RuPaul’s most famous sayings wrong.

The actress, 55, was among the stars taking part in The Great Celebrity Bake Off for Stand Up To Cancer, when they were tasked with making a biscuit likeness of their hero.

Tracy-Ann chose Drag Race icon RuPaul, 61, for her bake of choice, fashioning the drag queen and presenter out of biscuits and icing.

While the finished product managed to channel Ru’s sassy energy and huge wig, there was one part of the experience which didn’t go down to well with fans.

Despite Tracy-Ann decreeing that RuPaul was her hero, she managed to get one of Mama Ru’s most famous sayings wrong every single time. 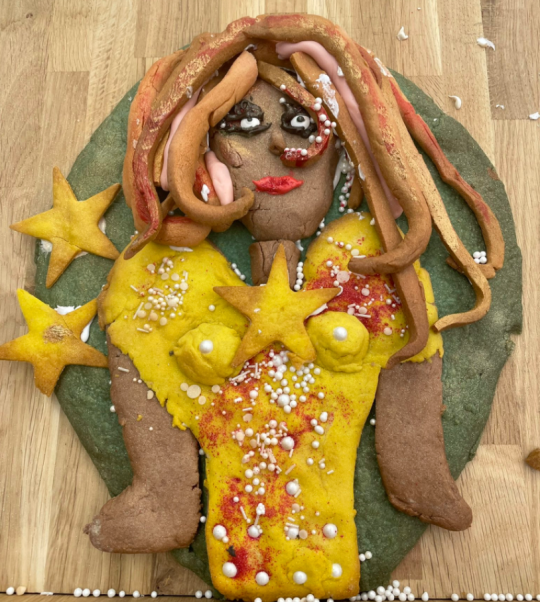 Her bake was pretty decent, even if her catchphrase was not (Picture: Twitter)

Attempting to say RuPaul’s famous saying: ‘If you can’t love yourself, how in the hell you gonna love somebody else,’ Tracy-Ann managed to make up a phrase of her own.

Tracy-Ann’s version came out to be ‘if you can’t love yourself, nobody else will love you’ – which didn’t go amiss with viewers.

babeâ¦ the quote is âif you canât love yourself, how in the hell you gonâ love somebody elseâ #GBBO #SU2C

“If you cant love yourself, nobody else will love you.”

Not only did Tracey get her rupaul quote wrong, she got Gareth Gates and Will Young the wrong way round. Iconic behaviour #GBBO

âIf you donât love yourself no one else is ever gonna love youâ – Rupaul Charles Andre â¦ apparently. ð¤ #GBBO

Remember if you can’t love yourself then others are going to find it difficult to love you or something like that. #gbbo #rupaulsdragrace

They took to Twitter to say: ‘Screaming that ultimate hun Tracey-Ann Oberman just got her hero RuPaul’s most famous quote wrong.’

Others added: ‘“If you don’t love yourself no one else is ever gonna love you” – Rupaul Charles Andre … apparently’ and ‘Remember if you can’t love yourself then others are going to find it difficult to love you or something like that.’

One joked: ‘”If you cant love yourself, nobody else will love you”. Yep that’s totally how that saying goes. 100%.’

Despite her faux-pas with the saying itself, Tracy-Ann’s bake did impress the judges nonetheless.