Viewers complained that GB News was down (Picture: GB News)

GB News was plagued with technical issues on Sunday morning with viewers complaining the network was down for nearly three hours.

Just months after former chairman Andrew Neil said the channel’s glitches left him ‘in despair’, it appears that problems prevented from any live content from airing.

Instead, it has been reported that the channel aired a looped video of trailers and recent interviews from 6.16am until around 9.17am when the presenters tried to act that ‘nothing odd had happened’.

Viewers, however, expressed their anger and frustrations at the blunder on social media.

‘Technical issues again?!’ fumed one. ‘You do realise when TalkTV comes on air you aren’t going to be around if these carry on?’

Echoing a similar sentiment, another blasted: ‘How can you justify being essentially off-air since 6AM today? It’s time to come clean about what’s going wrong.’

@GBNEWS technical issues again?! You do realise when TalkTV comes on air you aren’t going to be around if these carry on?

How can you justify being essentially off-air since 6AM today? It’s time to come clean about what’s going wrong. @AlStewartOBE @colinbrazierGBN @sw1a0aa

@Nigel_Farage why has @GBNEWS live television gone off air this morning??? If I have to the nauseating Emily Thornberry one more time I’ll throw something at the TV!

@GBNEWS this is the second time in the space of a few days that there has been a technical problem , get your act together please!! At least tell everybody what is happening, you know,a little communication!!!

I love GB News. It’s a breath of fresh air, but they seriously need to sort out their technical problems which are all too common. The channel has just been on a loop since 6am so gave up watching. Same thing happened the over evening too.

A third raged: ‘@GBNEWS this is the second time in the space of a few days that there has been a technical problem, get your act together please!! At least tell everybody what is happening, you know, a little communication!’

The glitches come just months after Neil gave a savage assessment of GB News where he branded the news channel a ‘disaster’ and stated that it brought him ‘close to a breakdown’.

After hosting just eight episodes of his flagship show on the channel, which launched back in June, Neil announced that he was leaving the network as chairman and presenter.

While he initially said he would make appearances as a talking head guest on the show, bridges have been burned in recent days following Neil’s appearance on Question Time, with the journalist saying he will never show his face on GB News again. 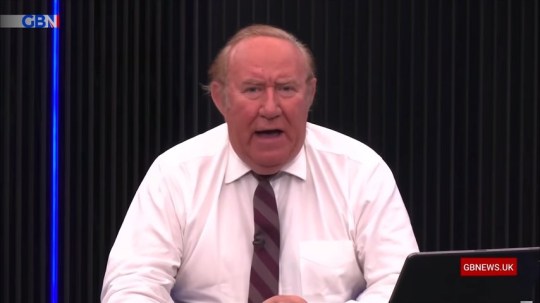 In a lengthy interview with the Daily Mail, Neil said that he warned bosses that the station was nowhere near ready to launch in June, but that they ploughed ahead anyway, resulting in major technical errors, including system outages and lighting so poor viewers struggled to see the presenters.

The former BBC journalist said: ‘It just got worse and worse. At one stage, we were waiting to go on air and the whole system went down. It had to be rebooted and we only managed it with 15 seconds to spare.

‘That stress was just huge. It meant you couldn’t think about the journalism. You were just constantly wondering: “Will we make it through the hour?” By the end of that first week, I knew I had to get out. It was really beginning to affect my health. I wasn’t sleeping. I was waking up at two or three in the morning.

‘I had a constant knot in my stomach. When I did wake up I’d feel fine, then remember all the problems I had with GB News and this knot would come and wouldn’t leave me for the whole day.’