Gavin And Stacey is without a doubt essential viewing over the Christmas period.

Matthew Horne and Joanna Page’s Gavin And Stacey last appeared on television screens for a  festive special in 2019, with Nessa (Ruth Jones), Smithy (James Corden), Pam (Alison Steadman), Mick (Larry Lamb), and the rest of the gang joining them.

The one-hour episode delighted fans but left many unanswered questions like… did Smithy accept Nessa’s proposal?

So, will the show be returning this year to give us some answers? We’ve got everything you need to know right here.

Is there a 2021 Gavin And Stacey Christmas special?

Although many Gavin And Stacey cast members have expressed interest in filming another episode of the beloved comedy, there will not be a new special this year. 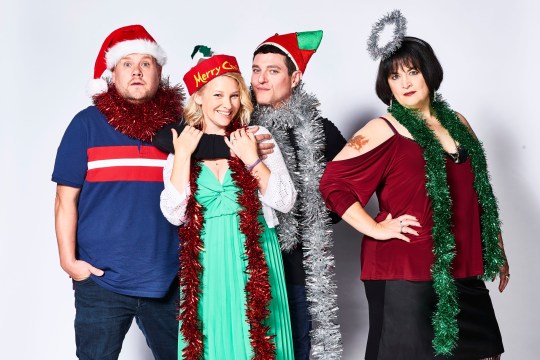 Fans have been desperate for more ever since (Picture: BBC)

Joanna Page previously revealed she was phoned up ‘out of the blue’ to get involved with the last chapter and expects the same could happen.

She recalled: ‘After the third series ended we were told, “this is it, there won’t be any more” so it was such a complete shock.

‘I’d expect if it was ever going to be on TV again that getting another phone call out of the blue is what would happen.’

She also teased that she felt ‘the whole cast’ would be up for shooting another special as ‘it’s such a joy to film’.

In April, Rob Brydon teased that another special could be on the cards.

Speaking on his Brydon & podcast the actor, who plays Bryn West in the series, said: ‘Well, I think they might do one more special because they left it hanging, didn’t they, with the proposal?

‘So it would seem strange if they didn’t. But they should crack on if they are going to do it.’

Gavin And Stacey is available to stream on BBC iPlayer.