The show’s tour is continuing late into the year (Picture: BBC Studios/Alan Peebles)

A ‘fight’ is said to have broken out during a live Mrs Brown’s Boys performance, resulting in security having to step in to calm audience members down, it’s been reported.

A show based on the Brendan O’Carroll-led BBC sitcom – dubbed ‘the musical for Moore Street’ – is currently on tour, with a final date scheduled to be taking place in Dublin November this year.

While fans of the programme have lauded the production for leaving them in hysterics, a recent show is said to have become somewhat chaotic when a ‘10-minute punch up’ took place in the audience.

The performance in question was held in Glasgow over the weekend, with the brawl reported to have occurred soon after it began.

According to the Irish Mirror, security stepped in to calm down those involved, resulting in the performance being stopped.

However, the pause was only temporary, with the actors able to resume after the unexpected interruption. 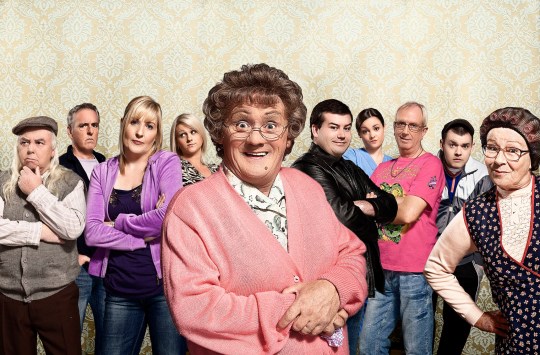 One fan reportedly wrote on the Mrs Brown’s Boys Facebook page how ‘funny’ they found that the show was ‘stopped whilst the fight was happening in the crowd’.

Someone else praised the cast for the performance, saying it was ‘great’ despite the ‘unnecessary interruptions’.

‘However you managed as usual to rise above it,’ they added.

‘Hopefully no cat fights in the crowd on your next show,’ another fan quipped.

One person who attended the event admitted that they initially thought it was all part of the act, with another referencing the ‘extras’ that could be ‘heard in the audience’.

Another person who was there said: ‘Someone was fighting lol and then one behind me was very loud and drunk. Ended up crying. But the security were fantastic and took her outside until she calmed down and got back in lol.’

The Mrs Brown’s Boys tour has traversed from locations including Blackpool to London, Birmingham and Hull.

The dates that are yet to take place will take place in Cardiff, Sheffield, Edinburgh, Belfast and Dublin.

Metro.co.uk has contacted representatives for the event and the venue in question for comment.