Jordana Brewster revealed she ‘bawled’ while watching Paul Walker’s ‘return’ to the Fast and Furious franchise.

The late actor, who played Brian O’Conner in the action films, died at the age of 40, following a car crash in 2013.

His character last appeared on the big screen at the very end of Furious 7, in 2015, with Walker’s brothers stepping in to finish off his final scenes.

Brian made a very brief return in the closing moments of F9 and was seen driving his iconic blue Skyline into the driveway ahead of a family dinner.

Chatting to Metro.co.uk on the release of the extended director’s cut, Jordana – who plays Mia Toretto – recalled the mood on set during filming.

‘It was actually really interesting to film, because we were in London on a soundstage and we were shooting it very piecemeal because we got no sun on that day,’ she told us. ‘Obviously we were pretending we were in LA. 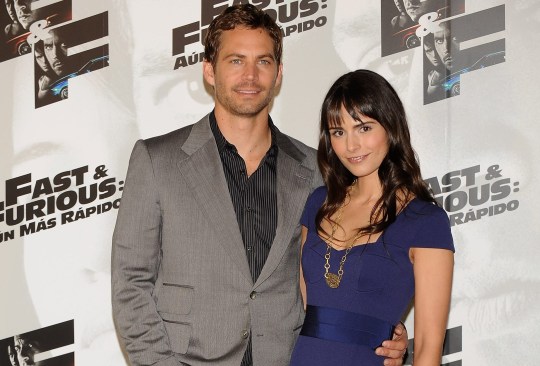 Jordana and Paul were onscreen partners in the franchise (Picture: Getty)

‘It was the thing where it all came together so beautifully when I saw it at the premiere, and I was just bawling, and I was so touched.

‘While we were shooting it, I was just like, “Justin what are we doing?” which is what it’s like with green screen sometimes, and all of the moving pieces.’

F9, helmed by director Justin Lin, saw Dominic (Vin Diesel) yanked out of the quiet life he was living with Letty (Michelle Rodriguez), and thrown right back into the action alongside his team – in a bid to secure a device that could end up destroying the world.

Dom’s family dynamics took centre stage with sister Mia also returning to the fold as they delved back into childhood memories, giving us some much-needed backstory into the Toretto clan.

Talk turned to what we can all expect from the next instalment, with Fast and Furious 10 expected to be released in 2023.

Spilling the beans on what she would love to see Mia do next, Jordana admitted that she wants to explore her bond with onscreen brother Jakob (John Cena).

‘I also loved working with Michelle and our scenes in Tokyo where we’re looking for Han, I feel like it was really fun to explore that relationship.

‘There’s so much history there and yet the fans haven’t seen us on screen that much together. I would love to see what that partnership looks like.

‘I feel Justin really holds the heart of this franchise and he treats it so well. And that especially is so indicative of how masterfully he honours the franchise, and the history of the franchise.’

Fast and Furious 9 with the extended director’s cut is available to own on Digital now and 4K UHD, Blu-ray and DVD now.