This introduction is probably going to land me on a government register, but when I play first-person shooters, I like my enemies to bleed. There are many layers to good FPS design, the feel of the movement, the design of the levels, the weight of your weapons. But it’s hard to ignore the pure catharsis of turning someone trying to kill you into a pile of quivering mince. Painting the walls with your enemies’ insides is one of the great joys of FPS gaming, and the farther a shooter lets me spread the red into the corners, so much the better.

It’s to Fashion Police Squad‘s credit, therefore, that during my time with it I barely missed the gore and giblets typically associated with the genre. This retro-styled shooter sees you using your arsenal of colourful weapons to fix your enemies’ fashion crimes, painting charcoal suits with a dye-blasting shotgun, and shoring up baggy pants by whipping those trailing trousers with a belt. It’s a gimmick that could easily run thinner than the seam on a second-hand pair of boxer shorts. But there is an impressive amount of substance backing up Fashion Police Squad‘s sense of style.

You play as Sergeant Des, a dapper (if slightly dim) clothing copper dedicated to fighting a fashion crimewave afflicting his city. The streets are overrun with ill-fitting suits, socks-with-sandals, and blindingly loud jerseys. As Des, you’ll need to dodge flying briefcases and high-speed electric scooters as you try to get the measure of these scruffy scofflaws, dispensing justice with an array of fashionable firearms.

The hook of Fashion Police Squad‘s gunplay is that each weapon is geared toward solving a specific type of fashion crime. So while your 2-Dye-4 Elite is perfect for solving colour-based crimes, smartening-up drab suits and toning down loud shirts, it’s useless against an enemy with poorly-fitting frippery. For those foes, you’ll need to switch to your Tailormade, a rapid-fire sewing machine that’ll stitch up opponents in no time.

The risk with this style of FPS is that it ends up feeling restrictive, forcing you into a game of murderous matching rather than letting you figure out the optimal way of battling enemies. Fashion Police Squad doesn’t entirely escape from this – the first few levels can feel somewhat binary. But the issue fades away as the weapon and enemy roster expands. A few hours into the game, you pick up the Wet’Ones, a sud gun handy for dousing enemies whose fashion is too fire. But the Wet’Ones high-pressure soapy spray is also useful for shrinking baggy suits. 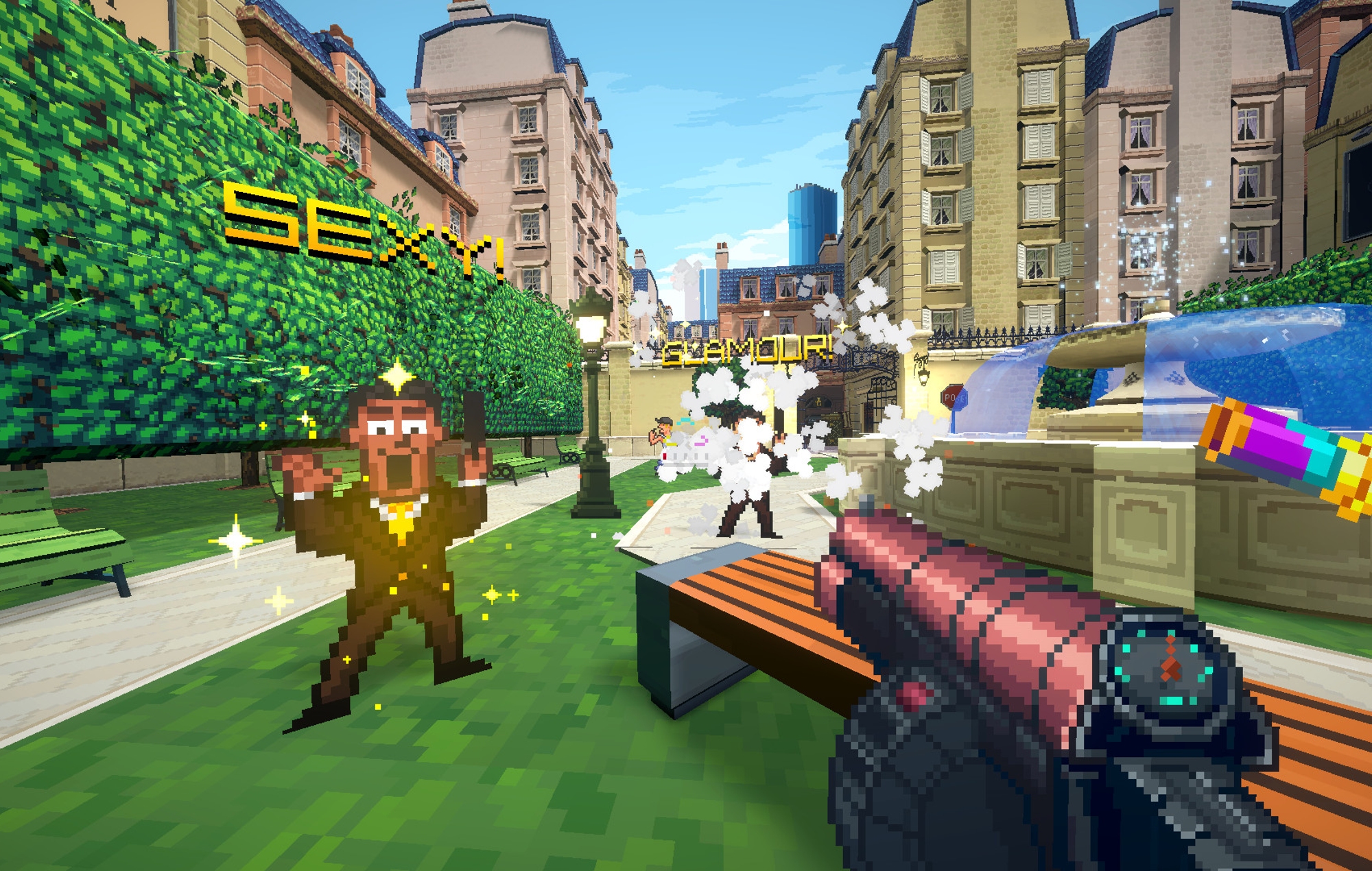 Developer Mopeful Games has clearly thought hard about how to make fixing clothing calamities as satisfying as blasting a demon’s entire respiratory system out the back of their ribcage. Weapons have the weight and feedback that a good shooter needs, while some like the shotgun do let you paint the walls, just with dye rather than digestive fluids. When an enemy’s health reaches zero, their fashion crime is resolved in a puff of smoke, while a booming, Unreal Tournament-style announcer makes effusive proclamations like “fabulous” or “voguish”. It’s amusing, but also gratifying.

Fashion Police Squad is also an impressively kinetic shooter. Your belt, for example, isn’t solely for whipping baggy trousers into shape. It can also grapple onto flagpoles, letting you swing across gaps and up to higher ledges. This action has a powerful momentum behind it that brings to mind leaping on and off the Skyrails in Bioshock Infinite. Mopeful Games applies this mechanic to some liberating platforming challenges, with you leaping between balconies and along perilously tall alleys of skyscrapers. The Wet’Ones, meanwhile, has a secondary function that lubricates the floor in front of you, accelerating your movement. This enables you to jump across much larger gaps, which in turn lets Mopeful Games get more creative with the level design. 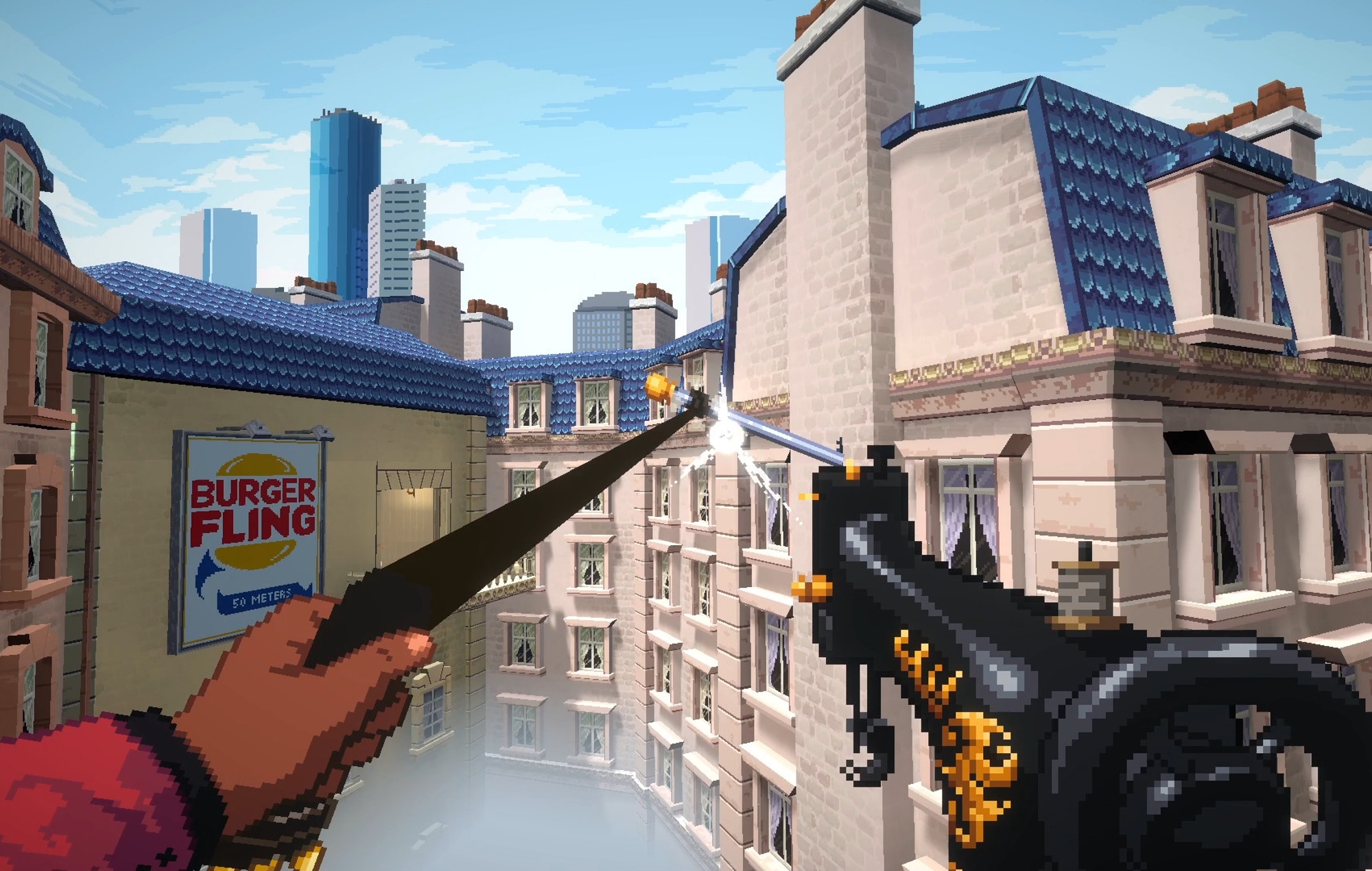 On the subject of level design, Fashion Police Squad‘s maps are colourful, knotty affairs, reminiscent of a brighter, breezier Duke Nukem 3D. Like the mechanics at the core of the game, the levels become more interesting as it progresses. For example, one mission is set on a subway train, and initially appears to be a straightforward, linear gauntlet. But it quickly reveals itself to be much more serpentine and interesting. There is a recurring problem with the map design, however, which is that most levels involve a fair amount of backtracking. Sometimes the game tries to mitigate this by sprinkling in new enemies on your return trip. Other times, though, it just doesn’t bother, leaving you wandering back through inert-feeling spaces.

This isn’t the only loose stitch in Fashion Police Squad‘s outfit. The game has a weird quirk whereby when you initially defeat an enemy, they turn transparent, remaining that way until all enemies in the area have been beaten. The intent, as far as I can tell, is to stop defeated enemies from obscuring the battlefield, which would have fair logic to it. That said having defeated enemies basically disappear does slightly undermine the transformation element of solving the fashion crimes.

FPS also has a surprisingly strong narrative thrust, with the game’s story delivered through text-based chats between Sergeant Des and various other characters. The writing itself is decent, with an appropriately light-hearted tone that pokes gentle fun at both shooter convention and the game’s own patently absurd fiction. But these conversational interludes impact the broader flow of levels, lending them a stop-start quality that can be frustrating.

These hitches aside, Fashion Police Squad is a fun and imaginative twist on classic shooter design. While not quite on the same level as the best FPS throwbacks, the likes of Dusk and Amid Evil, it does more than enough that’s different and eye-catching to earn its place on the catwalk.