Mads showing off his nice guy side in Another Round. (Picture: Jeff Pachoud/ AFP via Getty Images)

‘I am a little amazed,’ says Mads Mikkelsen, reflecting on a career journey that’s seen him go from playing villains in James Bond (Casino Royale) and Marvel (Doctor Strange) to serial killer Dr Hannibal Lecter (in TV show Hannibal) and the designer of evil space station the Death Star (in Star Wars spin-off Rogue One).

Just call him Master of the Universe. ‘They all are, in their own rights, individual pieces of art but also part of the pop culture, which is a combination that’s wonderful. I never saw it coming. I had no idea it would happen to me.’

Speaking over Zoom from his home in Copenhagen, the 55-year-old Dane isn’t exactly the villainous type.

OK, he’s wearing black, but he has kind blue eyes and a sweet smile. If it’s a case of no more Mr Nice Guy, so be it.

And now he’s shooting the fifth Indiana Jones film with Harrison Ford – with Mikkelsen rumoured to be playing a Nazi scientist embroiled in the space race. So what’s it like always getting cast as the Hollywood bad boy?

‘I enjoy it,’ he shrugs. ‘Also, I have a different world that’s called Europe that has definitely seen me with different eyes throughout my career! So I’m not starving… I’ve never been starving in the sense of like, “Oh, why do people always see me this way?” 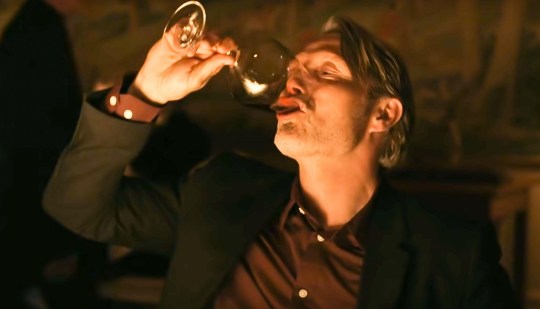 Mads isn’t playing a baddie for once in Danish movie Another Round (Picture: Alamy Stock Photo)

‘I think, actually, I’ve been seen by numerous people with very different eyes. So I embrace it. If the alternative is not to do anything in America, I take it!’

The reason for our encounter is his latest European escapade, uplifting Danish drama Another Round.

The film has already pricked the Hollywood consciousness, winning best international feature at this year’s Oscars.

Leonardo DiCaprio’s company will remake it in the US too, while Mikkelsen gained a Bafta nomination for best actor and a joint win at the San Sebastián Film Festival with his co-stars.

He plays Martin, a married father stuck in a middle-aged rut, just like his friends at the school where he teaches.

‘This is obviously a story about a man’s life – or four men’s lives – that has come to a standstill,’ he says. ‘The train has left the platform and they didn’t catch it. And they’re not happy about it.’ 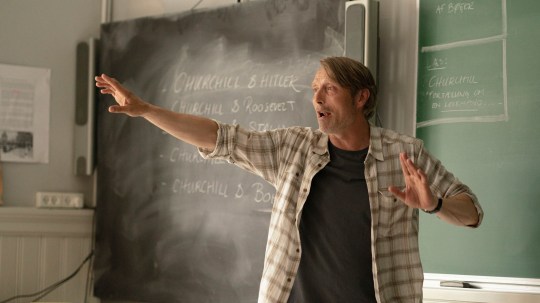 Another Round follows the story of four middle-aged teachers who are trying to find purpose in their lives (Picture: Henrik Ohsten)

Their solution? To experiment with alcohol, keeping themselves topped up and tiddly at work. It’s not about getting sloshed, he argues, but finding freedom.

‘The film is about life,’ he says. ‘Don’t let it pass you by. Isn’t your life great if you make it great? Come on, give it a shot.’

You even get to see Mikkelsen dancing (superbly) in the street in the sort of sequence you can imagine being on his show reel for the rest of his life.

‘I did not try to get into dancing shape because the character is not,’ he says. ‘I just tried to avoid getting injured. That’s what I was focused on!’

It took him back to a period in his youth when he trained as a gymnast. When he was asked to do acrobatics in a show, he switched disciplines.

‘I did that Billy Elliot thing where I started dancing but I couldn’t tell my friends because they were all working-class heroes,’ he says.

Eventually, his mates figured out what he was up to.

‘They realised there were a lot of girls dancing, so a few of them tried to become dancers as well,’ he says.

It certainly worked for Mikkelsen, who met his wife, Hanne, a choreographer, through dance.

Together since 1987, they have two children, Viola and Carl – now in their twenties – and got married in 2000 just as Mikkelsen’s career in Denmark was taking off.

The archetypal late bloomer, he was 30 when he won his first role, an idiot thug in Pusher.

‘All of a sudden everyone in the movie business knew me – I didn’t have to go around knocking on doors any more,’ he says.

He still works regularly in his homeland, with comedy-thriller Riders Of Justice out next. But these days, 25 years on from that debut, it’s Hollywood that’s bashing his door down.

‘I think I’ve been very privileged,’ he says modestly. It’s no more than he deserves.

Another Round is in cinemas from Friday