Graham Norton returned to Eurovision for his 12th contest and delivered his customary barbs and zingers as he kept a watchful eye over proceedings.

Unfortunately, it was yet another disappointing night for the United Kingdom. James Newman’s track Embers finished last with zero points, marking the fifth time the country has finished at the bottom of the pile.

Thankfully, Graham’s funny narration of the show last night gave us something to smile about.

The broadcaster offered up colourful commentary on the 26 countries competing in the grand final.

The Irish TV host has become well-known for his quick wit, which is why he is always a welcome addition to the competition. 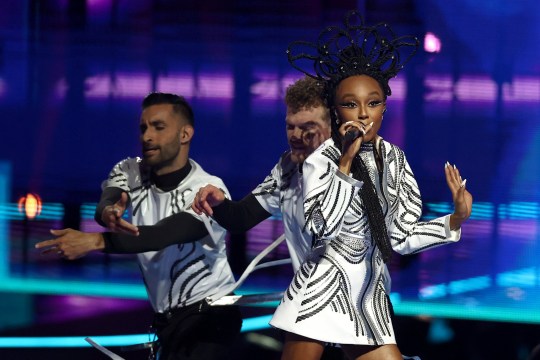 ‘We have some great vocalists tonight – some flat as Holland.’

Introducing the show, he made this joke about the singing ability of some of the contestants.

‘I love it. The Orthodox church of Cyprus are less keen.’

This tongue-in-cheek comment comes after the Orthodox Church of Cyprus said the song is making an ‘international mockery of country’s moral foundations by advocating our surrender to the devil and promoting his worship’.

This quip came while the Serbian trio Hurricane performed their song Loco Loco. It was clear that Graham didn’t think the girl group compared to the much-loved group Destiny’s Child. 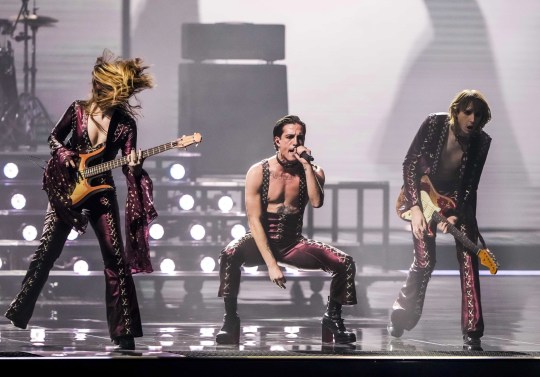 Graham was less than impressed by Italy’s performance (Picture: EPA)

The Irish TV host couldn’t stop taking jabs at the group as he also joked about their long locks flying around during the performance.

‘Well this song is Marmite. If everyone hated Marmite.’

Germany’s song I Don’t Feel Hate wasn’t popular amongst viewers, as many people deemed it to be ‘bizarre’ and childish.

Graham summed up the audience reaction perfectly when he made this comment.

‘Why so angry? Was it the lack of conditioner in the hotel bathroom?’

Finland’s entry was heavy metal rockers Blind Channel with their song Dark Side. In true heavy metal fashion, their entry included a lot of yellowing and headbanging, which resulted in Graham’s quip. 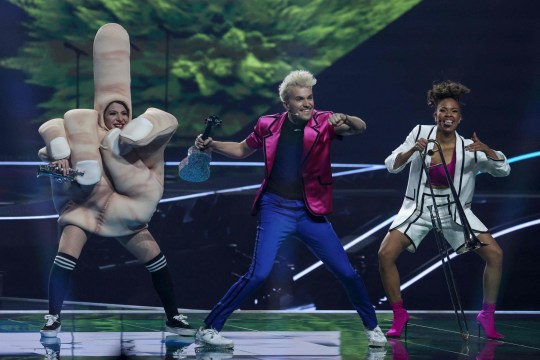 ‘They look like people from IT who dressed up as Steps for a Christmas party.’

Lithuania were represented by the band The Roop with their song Discoteque. Their costumes couldn’t be missed, as they all donned bright yellow outfits.

Of course Graham had to make a comment about it.

‘This has already been streamed 30 million times. I’m reading that because I don’t understand it. Maybe it will grow on me, like mould on a bathroom ceiling.’

Even though the Italian entry went on to win, Graham shared his distaste for the song.

‘By the way, if you do have a lockdown puppy and you’re trying to train it, I should warn you that she is going to attempt the highest note ever performed at Eurovision.’

Graham joked about Israel’s performance by Eden Alene, where she attempted to sing the highest note in Eurovision history.

‘My nose is bleeding so I think she achieved it.’

He quipped after the note was achieved.

We hope Graham is brought back for the show next year so we can enjoy his zingers once again.