Tituss Burgess has supported his co-star Ellie Kemper after she came under fire (Picture: FilmMagic)

Unbreakable Kimmy Schmidt actor Tituss Burgess has supported his co-star Ellie Kemper after she apologised for her past links to a controversial St Louis ball.

The actress came under fire after an old newspaper clipping of her being crowned at the Veiled Prophet Ball in 1999 re-emerged.

Ellie described the organisation behind the debutante ball as having an ‘unquestionably racist, sexist and elitist past’ and said that her ‘ignorance is no excuse’.

Tituss, who plays Titus Andromedon alongside Ellie’s Kimmy Schmidt on the Netflix series, supported his co-star, reposting her apology and writing: ‘I love my Ellie ❤️, Oh, & P.S. Next time, just ask me, I’ll tell ya what to do 🥰’.

Tituss, 42, wasn’t alone in supporting the actress, with The Office stars also commenting, after Ellie starred as secretary Erin Hannon in the NBC series.

Speaking out after she came under fire, Ellie said she is ‘the beneficiary of a system that has dispensed unequal justice and unequal rewards’.

The star went on: ‘There is a very natural temptation, when you become the subject of internet criticism, to tell yourself that your detractors are getting it all wrong. 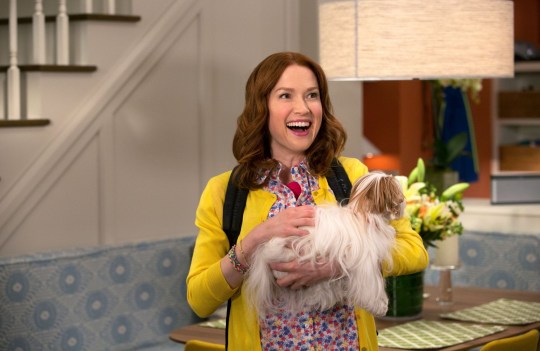 ‘But at some point last week, I realised that a lot of the forces behind the criticism are forces that I’ve spent my life supporting and agreeing with.’

She shared that she tries to live life ‘in accordance with values’ of ‘kindness, integrity and inclusiveness’.

‘If my experience is an indication that organisations and institutions with pasts that fall short of these beliefs should be held to account, then I have to see this experience in a positive light.’

Ellie continued: ‘I want to apologise to the people I’ve disappointed, and I promise that moving forward I will listen, continue to educate myself, and use my privilege in support of the better society I think we’re capable of becoming. Thanks for reading this.’

The Veiled Prophet Ball is an annual debutante ball held in St Louis, Missouri each December, and historian Thomas M Spencer cited that its goals were to boost trade and class control, with The Atlantic adding it ‘reinforced the notion of a benevolent cultural elite’.

The organisation and ball have a racist and elitist history. The organisation was created by grain broker Charles Slayback and his Confederate Army officer brother Alonzo.

The Veiled Prophet Organization has said to USA TODAY that it is ‘dedicated to civic progress, economic contributions and charitable causes in St. Louis.’