Eddie Murphy and Arsenio Hall say they were ‘forced’ to include a white character in Coming To America.

Actor Louie Anderson starred as Maurice in the film, but apparently only after film bosses resisted the idea of an all Black cast.

The Nutty Professor star added: ‘They were like, ‘There has to be a white person in the movie. I was like, “What?” So who was the funniest white guy around? We knew Louie was cool, so that’s how Louie got in the movie.’

Arsenio revealed that he was shown a list of three white actors and Louie was their first pick. 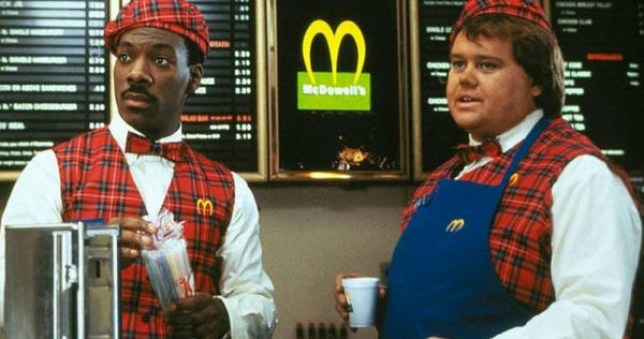 ‘It was official. I had a list. They gave me a list with three white guys. They said, “Who would you rather work with?” I said Louie’, he said.

Eddie and Arsenio are reprising their original roles in the upcoming sequel Coming 2 America.

The follow up, which is released on Friday, sees Akeem and his right hand man Semmi return to America so the prince can find his long lost son.

The Dolemite Is My Name star confessed he was worried about ‘tainting’ the legacy of the classic comedy.

Speaking to Essence magazine, he explained: ‘The one thing that I didn’t want to do was a bad sequel to a movie that a lot of people have a lot invested.

‘A lot of people grew up watching Coming To America. It’s special to them. So, you don’t want to taint that… Once the ideas started coming together, it took about four or five years to get the script all the way right. ‘Once we got it right, I knew it was time.’

Coming 2 America is out March 5 on Amazon Prime.