Eddie Hall has opened up on his hellish two years leading up to the fight (Picture: BBC/ Getty)

Eddie Hall admits he struggled to contain his emotions for his fight against Hafþór ‘Thor’ Bjornsson.

The former World’s Strongest Man – who won the 2017 competition and has captured more titles around the world – faced his friend turned bitter rival in a boxing match back in March, and it marked the end of a turbulent couple of years.

‘I’m the kind of guy that just bottles it all up and carries on, I don’t really talk to anyone. When I detached my bicep and I had Covid a couple of times – really low points, and I just plodded on.

‘Looking back, I was just so stressed and so f**king miserable.’

The 34-year-old athlete made his boxing debut against Game of Thrones star Thor – who was also taking part in his first fight – five years after they clashed following Hall’s World’s Strongest Man triumph. 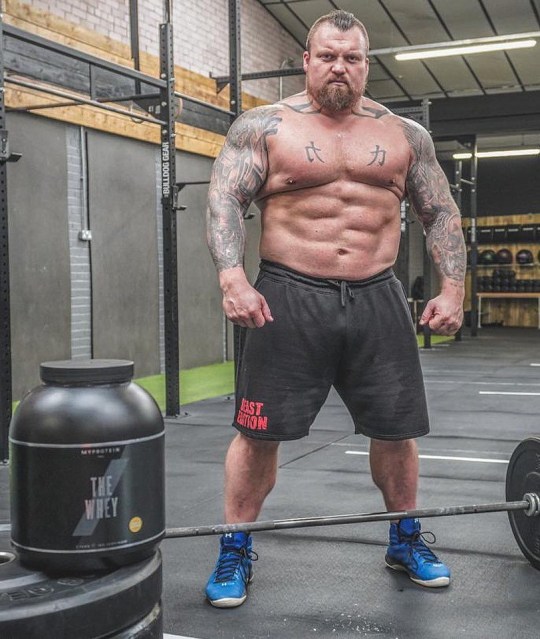 Eddie Hall admits his emotions got the better of him (Picture: @eddiehallwsm/Instagram)

During the Viking lift section of the contest, one of Bjornsson’s reps was voided after what was judged to have been an illegal move, and they were at odds for years until finally getting in the ring.

‘I was very professional in the lead-up and did everything I could do but I’m afraid, for me, when I got in the ring emotion took over. I just wanted to rip this guy’s head off,’ Hall candidly admitted.

‘In the lead-up to the fight, I was trying to lure him out. I just wanted to fight him, I didn’t really care about the boxing. [That was] a mistake on my behalf. First boxing fight I’d ever done, and you have to live and learn and move on.

‘My lesson was, you’ve got to respect the sport of boxing and put it all into the ring. I just wasted too much energy and emotion outside of that. I was trying to drag him into fights in the street – that’s where I wanted him, I just wanted a fight.’ 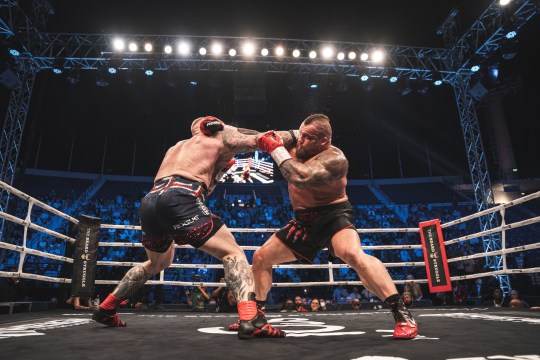 The Mountain and The Beast clashed in a boxing ring earlier this year (Picture: BBC/Mindhouse Productions/CoreSports)

Thor won the match in Dubai, but despite the disappointment, Hall – who had his parents, wife, son and brothers at ringside – was able to reflect and refocus his priorities.

‘It was like a release. I got to get the monkey off my back by fighting Thor, which I wanted to do for ages,’ he said. ‘It was quite a down point afterwards – but it’s like losing a competition in strongman, you get down about it.

Family is at the focus of BBC’s new documentary Eddie Hall: The Beast vs the Mountain, which delves into the strongman’s preparations for the fight, as well as his struggles with depression and anxiety. 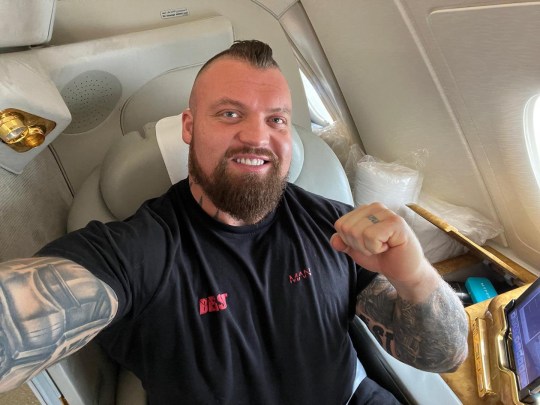 Eddie wants to dispel the myths around men and mental health (Picture: @eddiehallwsm/Instagram)

‘People think the World’s Strongest Man is this big gnarly man that’s nasty and angry and just lifts weights, eats food and goes the gym, whereas it’s so far form the truth. I’ve got two sides,’ he smiled.

‘I do have struggles and strains with depression, anxiety – as do a lot of people these days. I think breaking that stigma of being the World’s Strongest Man, being able to talk about it – this big alpha male, I think it breaks the stigma of males opening up.’

For Hall, he turned to swimming as a younger which helped him cope with his ADHD, but not being able to swim as a teen led to a downward spiral as he got into trouble at school and with police before strongman helped him turn things round.

‘When I was 13, that fell to s**t and the swimming really dropped down. Because the swimming dropped down, I believe that’s where my ADHD and everything kicked back in, and I rebelled,’ he admitted.

‘I still have the same problems now. If I don’t train for a number of weeks, I can feel it creep back in and I get the anxiety and whatever else, and that leads to depression because you don’t know what to do with all this emotion and chemical imbalance.’

Now, Hall is focused on his family, and doing what he can to help other men realise that it’s not a weakness to open up or ask for help.

90 males a week in the UK commit suicide, that’s one male every two hours takes his life in the UK. When you break it down on paper, that’s f**king disgusting,’ he said. ‘If I can [talk and express myself], then I think it’ll help quite a lot of people out there to break that stigma and reach out for help.’

Eddie Hall: The Beast Vs The Mountains airs on BBC Three and iPlayer on Sunday, June 26. 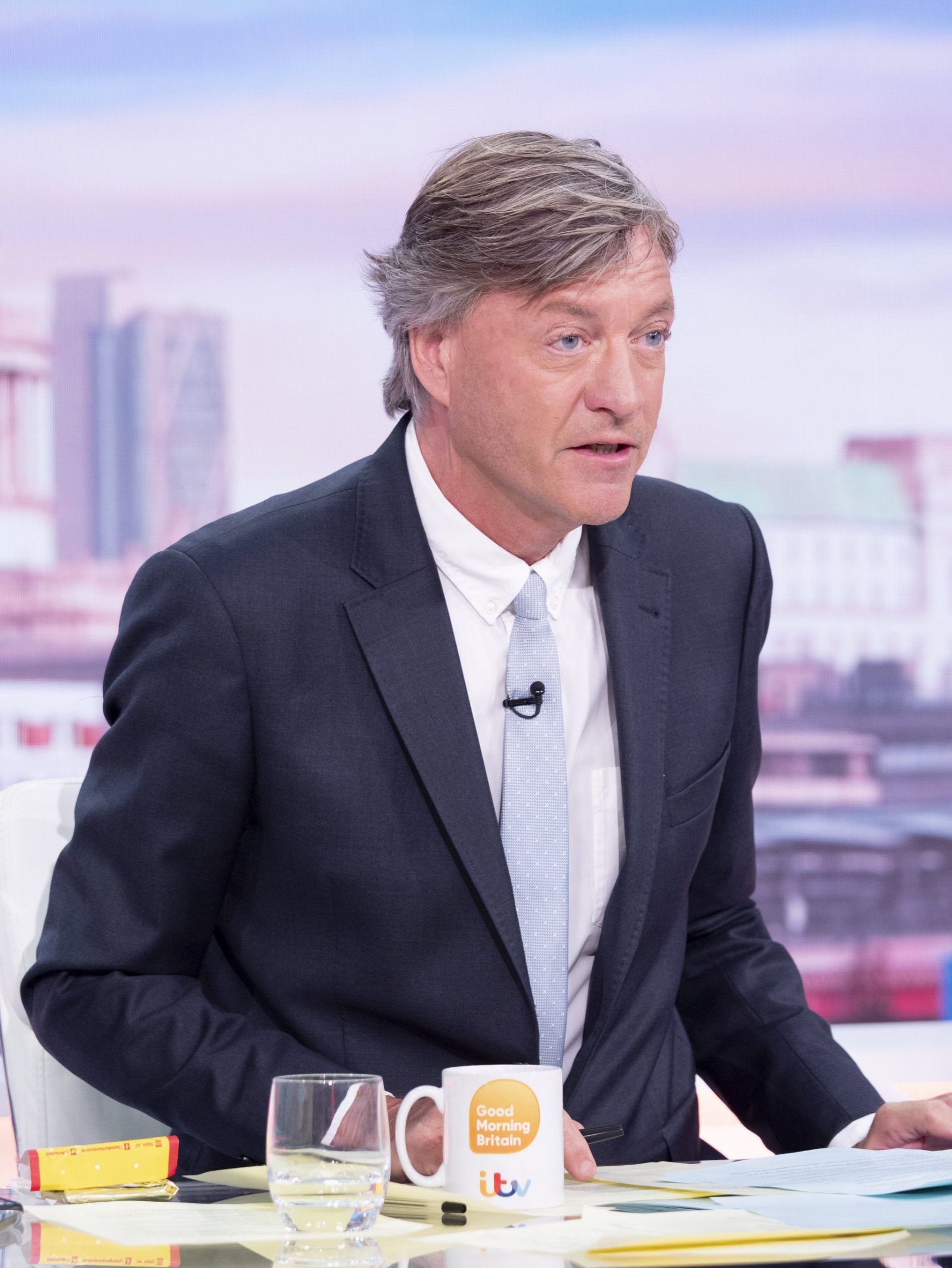