Ed Sheeran was heckled by a child after making a surprise appearance on RTÉ’s The Late Late Toy Show… and couldn’t have handled it with more poise.

Chart-topper Ed surprised the audience – which usually adds up to around 2million people watching from Ireland and abroad – as he joined the children’s choir for a performance.

The choir was halfway through their rendition of his hit song Leave Your Life when Ed suddenly showed up, playing guitar and wearing a Christmas jumper, as he sang a duet with choir lead Hayley.

While Hayley, and most of the people watching from home and abroad, were impressed, one young boy – a member of Ed’s own backing choir – was decidedly not.

Ed told the Toy Show host Ryan Tubridy that one of the children’s choir members had told him backstage that he was ‘not a fan of Bad Habits’, the song that earned him his 10th number one.

In response, the boy in the choir shouted: ‘I’ve just heard it about 1.2billion times!’

Ed sang a duet with choir lead Hayley, but not everyone was impressed (Picture: RTE)

Presenter Ryan, keeping the peace, assured Ed there was a ‘hidden compliment in there’, as the boy’s mother had ‘obviously played it so much’.

The Grammy-winning musician held no hard feelings however, as he then invited every member of the Toy Show children’s choir, and their families, to any concert of their choosing.

‘As many tickets as you want, to any show’, he told them.

Ed, who has family in Ireland, will perform across the entire island for his upcoming tour, with concerts planned in Dublin, Cork, Limerick and Belfast. 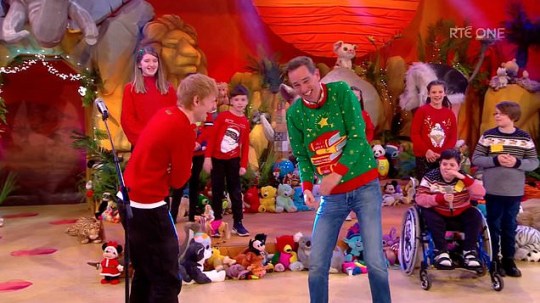 Ed was a great sport and even offered the young heckler and his family free tickets to his concert (Picture: RTE)

It was the musician’s second time on the show, having surprised mega-fan Aimee in 2014, but Ed admitted this was his first time watching it in it’s entirety from backstage – and he loved it.

The Late Late Toy Show is the biggest TV event of the year in Ireland, with Irish immigrants tuning in from over 100 different countries to watch it each November. 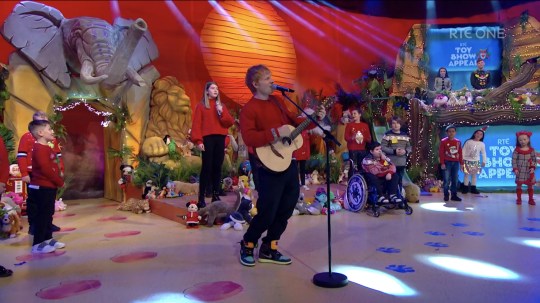 It was Ed’s second time on the show but his first time watching it in its entirety (Picture: RTE)

While it began as a way for kids to review the toys that are guaranteed to be popular for Christmas, it has since evolved into a massive festivity with music, dance, some incredibly touching moments, and an absolutely massive charity fundraiser.

On Friday night, before the end of the two-hour show, Toy Show audiences raised an incredible €3.3 million (£3m).

The Late Late Toy Show is available to watch on RTÉ Player.