Between him and Lorde, the four year itch is real.

The Shape Of You singer, 30, shared a snippet of the track on Instagram and confirmed the song’s arrival on June 25.

It will mark the first time Ed has released a single that does not feature a collaborator since Happier from his 2017 album Divide.

The artwork features Sheeran dressed as a vampire and images of the star were project on to London landmarks including the Tate Modern on the South Bank overnight.

He said: ‘I’ve been working away in the studio over recent months and I can’t wait for you to hear Bad Habits.

‘I always aim to push myself and my music in new directions and hopefully you’ll hear that on the new single. Feels great to be back!’

The track will receive its first live outing when Ed performs from Ipswich Town’s Portman Road on June 25 for TikTok’s Uefa Euro 2020 show.

The Grammy Award winner released the mellow acoustic song Afterglow in December but said it was a ‘Christmas present’ not a single.

He then released the No.6 Collaborations Project in July 2019, which featured artists including Justin Bieber, Camila Cabello and Travis Scott. 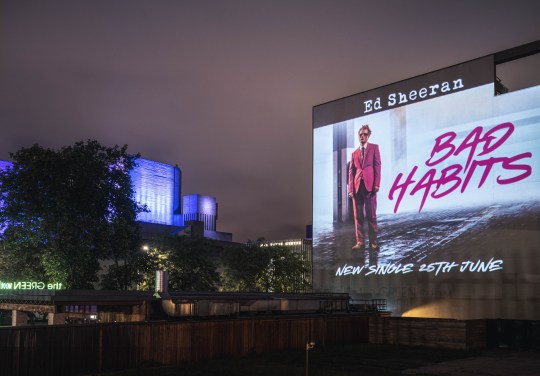 Ed’s new track is out this month

Ed doesn’t really understand how to take a proper break, does he?

The star has been enjoying life out of the spotlight after welcoming daughter Lyra Antarctica Seaborn Sheeran in August with his wife Cherry Seaborn.

His album Divide arrived in 2017, which including the songs Castle On The Hill, Galway Girl and Shape Of You, became the biggest selling album of the year and its accompanying tour became the highest grossing of all time, as Ed played a massive 260 shows between 2017 and 2019.