Merry Christmas sees the two music icons team up for a jaunty, feel-good anthem as they urge everyone to have a – you guessed it – merry Christmas.

Before the song was even released it was a hot favourite to take the Christmas number one for 2021, and now that it’s out in the world, the odds have been slashed again.

Uploaded to Youtube on Friday, the track – which will raise money for the Ed Sheeran Suffolk Music Foundation and The Elton John Aids Foundation – has almost 1 million views and has been liked 111K times.

The video takes Ed and Sir Elton on a magic festive journey through the music videos of classic Christmas hits from years gone by, with everything from Mariah Carey to East 17 getting a nod.

With more references than you can shake a Santa hat at, it’s easy to miss one or two – so here are all the references in Ed Sheeran and Sir Elton John’s new Christmas song.

Ed Sheeran and Sir Elton John have referenced some of the best Christmas songs of the past several decades in their new video Merry Christmas (Picture: Backgrid)

What are the references in Ed Sheeran and Sir Elton John’s Merry Christmas?

Ed and Sir Elton reference lots of classic Christmas songs in their music video for Merry Christmas, from East 17 to Aled Jones.

Here they are in order… 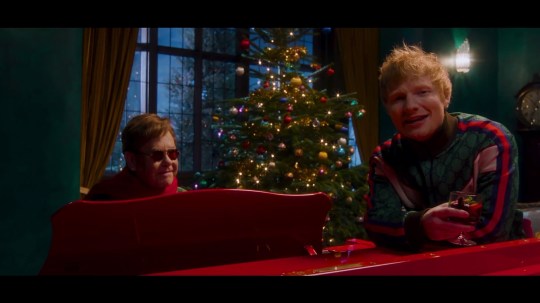 Sir Elton and John are the new Bing and Bowie (Picture: BACKGRID)

The video starts off with Ed leaning on Sir Elton’s grand piano as he plays, echoing the iconic duo of Bing Crosby and David Bowie for their Christmas hit Little Drummer Boy.

Mariah Carey – All I Want For Christmas Is You 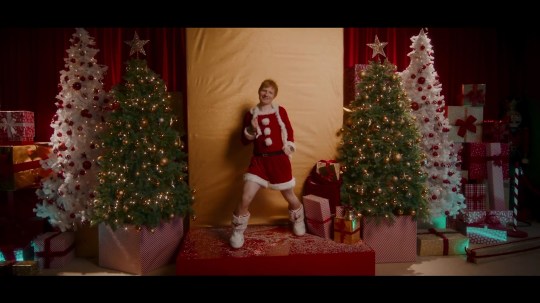 Who wore it better? Ed takes off Mariah Carey in his new Christmas video (Picture: Backgrid)

It’s hard not to recognise that daring, above-the-knee Santa dress – but usually it can be found on Mariah Carey in her All I Want For Christmas Is You music video, not a dancing Ed Sheeran. 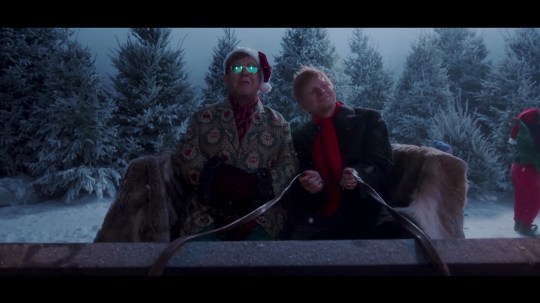 Did that sleigh ride look familiar? Especially Ed Sheeran gazing lovingly at Sir Elton as he holds the reigns? Yep, you’ve seen that before – in Shakin’ Stevens’ 1985 hit Merry Christmas Everyone.

The Snowman – Walking In The Air 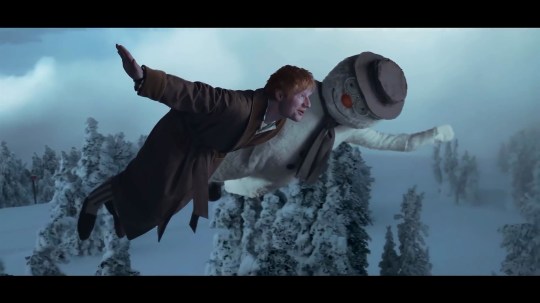 Could it be Elton hidden in that Snowman costume? (Picture: Backgrid)

Ed dresses up in the dressing gown and pyjamas worn by the little boy in the classic animated film The Snowman and is taken for a walk in the air by a big snowman (Not, unfortunately, played by Sir Elton John).

Wizzard – I Wish It Could Be Christmas Everyday 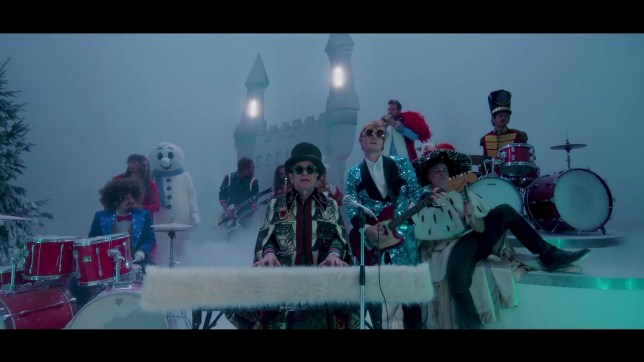 Probably one of the most bonkers Christmas music videos, Wizzard’s I Wish It Could Be Christmas Every Day is expertly taken off in Ed and Sir Elton’s new song, with Sir Elton’s keyboard taking pride of place instead of the drumset.

Merry Christmas also ends being wrapped up like a Christmas present, another homage to Wizzard’s hit.

Easily one of the best Christmas songs ever, Merry Christmas takes off Wham’s Last Christmas with a George Michael look-a-like stepping out of a vehicle before walking off-screen, probably going to get his heart broken. Oh, George.

Well this is meta. The pair take off Ed’s previous Christmas number one, Perfect, copying the scene where he and his love make snow angels. 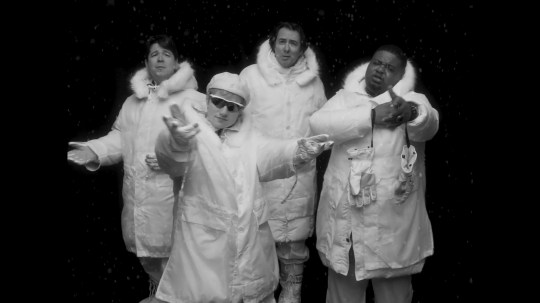 Ed teamed up with some of the UK’s top comedians to take off the famous video (Picture: Backgrid)

Ed and Elton’s new video sees a sausage roll soaring through space, because why not (Picture: Warner)

The last three years have seen comedian LadBaby gain the title of Christmas number one hitmaker, with his charity singles proving massively popular. Ed and Sir Elton pay homage to LadBaby’s love of sausage rolls in their Merry Christmas video.

Incidentally, LadBaby is the bookies favourite to clinch the Christmas number one again this year, even though he hasn’t actually released a song – although he did tell Metro.co.uk to ‘never rule out a sausage roll at Christmas’.

The terrifying Mr Blobby can be seen in the background of the new song (Picture: Warner)

Elton and Ed managed to pack in so many references into their Merry Christmas video that it would be easy to miss some: right at the end, a Sir Paul McCartney lookalike can be seen playing guitar in a group, a nod to his Mull of Kintyre music video.

The Darkness also make an appearance in homage to their Christmas number two hit Christmas Time, while Mr Blobby can be spotted in the background as Sir Elton and Ed rock out near the end of the video.