Dragons’ Den fans were shocked to see the return of Theo Paphitis as he replaced Peter Jones for an episode of the BBC show.

The former Dragon, who quit the show in 2012, returned to help out his friend, who was self-isolating due to the Covid-19 pandemic.

Introducing the returning Dragon, host Evan Davis explained: ‘This week there’s a new but very familiar face in one of the chairs, because even Dragons aren’t immune to the effects of the pandemic.

‘With Peter Jones having to self-isolate, high street heavyweight Theo Paphitis has stepped in to take his place.’

Theo’s fellow Dragons were nothing but welcoming as he got comfortable in Peter’s chair, with Deborah Meaden telling him: ‘Can I say, it’s really nice to have you here agan.’

Since Dragonsâ Den began 16 years ago I havenât missed a single dayâs filming however during the last series I had to self-isolate.When discussing with @BBCOne who could stand in for me I chose @TheoPaphitis as he is one of the great past Dragon. Hereâs some messages he left. pic.twitter.com/4NNRci06Tj

‘I’ll put stupid socks on in homage to the tall fellow,’ Theo teased.

The entrepreneur clearly made himself very at home, however, with Peter, 55, revealing that his former co-star left him some very clear notes.

Plastered to two of his chairs and his clothes rail were messages reading: ‘Property of T.Paphitis’.

‘Since Dragons’ Den began 16 years ago I haven’t missed a single day’s filming however during the last series I had to self-isolate,’ Peter explained. 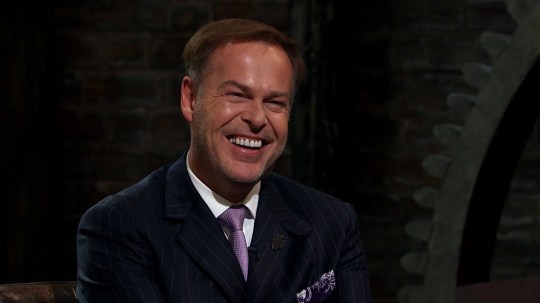 Peter had to self-isolate (Picture: BBC)

‘When discussing with @BBCOne who could stand in for me I chose @TheoPaphitis as he is one of the great past Dragon. Here’s some messages he left.’

Theo responded: ‘Thank you @dragonjones ! It was an absolute blast being back.’

Businessman Theo appeared on Dragons’ Den from 2005 to 2012. However, he made a brief return in 2019 to stand in for Touker Suleyman.

While the Den has seen a fair few Dragons come and go, the current line-up consists of Peter, Deborah, Touker, Tej Lalvani, and Sara Davies.

However, the programme is also about to welcome its youngest investor yet with Steven Bartlett joining the show.

It is expected that the 28-year-old entrepreneur will share his social media, technological and brand-building experience.

Dragons’ Den airs Thursdays at 8pm on BBC One.