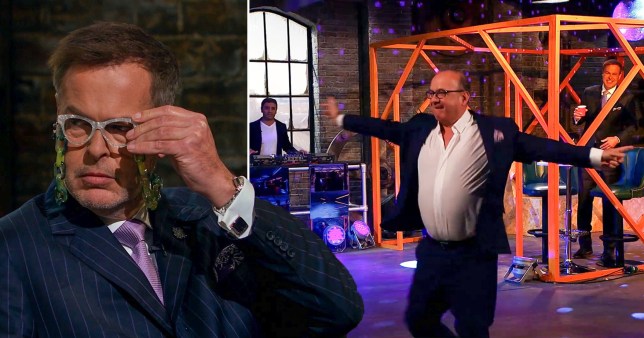 Touker Suleyman was ready to bust a move in the Den (Picture: BBC)

Dragons’ Den star Peter Jones was left utterly bemused on the BBC series as he assessed a socially-distanced nightclub experience… but it wasn’t enough to ruin Touker Suleyman’s fun on the dancefloor.

On the latest episode of Dragons’ Den, Manchester-based club promoters Nat Lea and Kat Warburton introduced the Dragons to their business called Puffin Box, which they described as a ‘fully immersive live music experience’.

Making their entrance after a performance by a DJ and a dancer in a one-legged silver unitard and a matching mask, the duo outlined how their idea came about during the coronavirus pandemic.

While they promised a ‘90-minute electrifying mini clubbing event’, where people in the same social bubble enter five different boxes and enjoy music played by a revolving DJ, business titan Peter wasn’t taken with the notion, looking perplexed from the start.

‘I have no idea what your business is,’ he admitted, looking puzzled.

When he asked why they named the business Puffin, Kat explained that it was simply because she ‘really likes Puffins’, resulting in Peter putting his head in his hands as he laughed at her response. 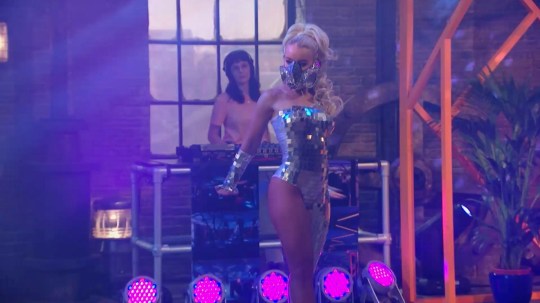 The pitch began with a performance by a glitzy dancer (Picture: BBC)

However, the business proposal received praise from fellow Dragon Tej Lalvani, who commended them on thinking ‘outside the box’ while the clubbing industry suffered amid the Covid-19 outbreak.

‘Hats off to you guys. Your industry’s one of the hardest hit in the current climate, and to really try and think outside the box is smart,’ he said.

Despite being complimentary of their business, in the end neither Tej nor the rest of the Dragons decided to invest, with Sara Davies saying that she ‘wasn’t convinced it would make a lot of money’.

Nonetheless, after Nat and Kat left the room, the Dragons decided to throw on their dancing shoes and cut some shapes on the dancefloor.

Tej went behind the DJ decks as Peter sat down in the plush seating area, having a little boogie on his own as Deborah Meaden remarked on his ‘dad dancing’.

But then Touker stole the show, dancing flamboyantly by himself on the dancefloor.

‘Touker definitely looks like he has the best moves on the floor,’ Nat and Kate remarked, as the Dragons laughed while watching him living his best life.

We’re definitely in the mood to go dancing now!

Dragons’ Den returns next Thursday at 8pm on BBC One and is available to watch on BBC iPlayer.