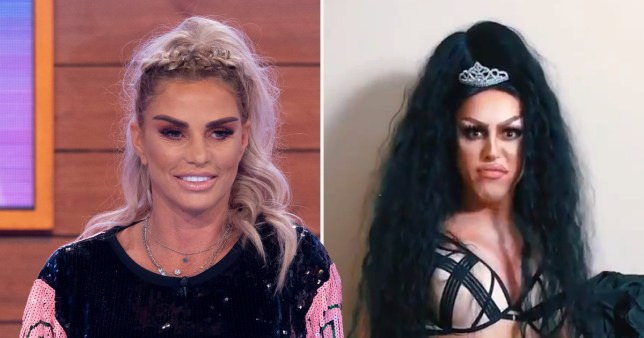 A’Whora has emerged as a fan favourite on RuPaul’s Drag Race UK this year – and judging by her audition tape, she’s always been a star.

The drag queen, real name George Boyle, shared the clip that helped them win a place on the competition, getting in character as the one and only Katie Price.

The video sees A’Whora do a killer impression of the former model and businesswoman in the previously unseen snatch game tape.

‘Sorry I’m late. First of all got held up in South Africa. Then, f*****g horse ran out onto the dual carriageway,’ A’Whora says in the clip.

As fans will know, A’Whora ended up impersonating Louie Spence on the programme, with Bimini Bon-Boulash getting into character as Katie instead.

A’Whora explained why she decided to drop her impression on the programme, and said that Bimini’s version ‘was still and always will be better’.

‘I actually packed both Katie price and amy Child’s but after being cast as the Essex ‘bimbo’ for the morning glory presenting challenge I decided to try and switch it up last minute to try and show the judges more versatility in my characterisations! However Bimini’s was still and always will be better! Glad I changed haha.’

Fans couldn’t contain themselves on social media, sharing their obsession with the new clip.

‘Oh my GOD u shoulda won on your audition tape alone,’ another said.

Meanwhile, RuPaul’s Drag Race UK’s A’Whora recently said she suffered trolling so severe that she regretted signing up to the show.