River blew fans away with her runway look (Picture: BBC)

This week’s show saw another queen sashay away from the workroom in a tense contest.

But after RuPaul was left ‘disappointed’ by the infomercials made by the queens on the latest challenge, a big decision was made about the tops and bottoms of the week.

The presenter was clearly not impressed, and warned: ‘Ladies, brace yourselves because Drag Race is about to get real.’

Ru accused the commercials of having ‘no originality’ before adding: ‘I’m disappointed. I’m really, really disappointed, y’all are playing it safe. 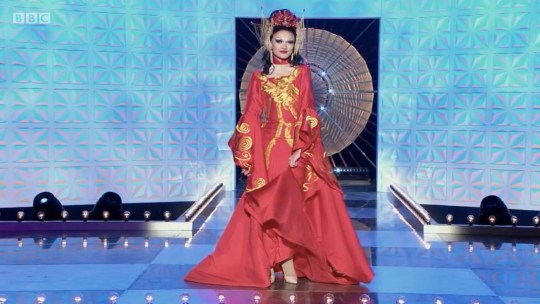 ‘That’s not how you become the UK’s next Drag Race superstar.

‘During your conversations in the workroom yesterday, I didn’t spend time going through your storyboards.’

‘So, first and foremost, I blame myself,’ the host continued, before dropping a huge bombshell.

‘That being said, this week there will be no winners, no queen is safe and two of you will be lip-syncing for your life.’

However, despite the host being left thoroughly unimpressed by the queens this week, many viewers thought one of the remaining contestants more than deserved a coveted badge. 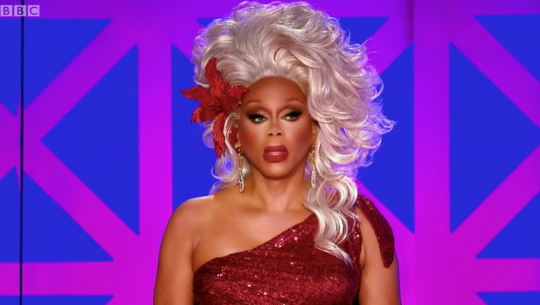 Ru was all guns blazing in the latest episode (Picture: BBC)

Many online were calling for River Medway to have been awarded the latest win, and were confused as to why the Kent-based queen seemed to have been overlooked.

River’s beautiful red and gold flowing silk gown beautifully showed off her heritage, with fans won over by the look on the runway.

One shared on Twitter: ‘HOW DID THEY NOT GIVE THE WIN TO RIVER? She did the best. Period. Fuming. #DragRaceUK.’

Another fan agreed: ‘@river_medway is actually a work of art are you kidding me  #DragRaceUK.’

‘River, and I can’t stress this enough, Medway #DragRaceUK,’ a Twitter user said, with a follower commenting: ‘The best runway was River’s, hands down. #DragRaceUK

A fan added: ‘I’m just throwing it out there, @river_medway deserved that badge tonight! #DragRaceUK.’

In a further twist, Ru turned the responsibility of the judging around to the remaining queens in a brutal ending, adding: ‘Last week we saved two people, somebody’s got to go home, so I want to hear from you – who should go home this week and why?’

It was up to the queens to decide who they thought the two worst contestants were from this week’s episode, with Scarlett Harlett and Charity Kase ending up in the lip-sync battle.

Ultimately Charity was sent home – but who will be next?