RuPaul’s Drag Race UK star Bimini Bon-Boulash has expressed how ‘blown away’ they felt when Kathy Burke slid into their DMs, having admired the comedian since childhood.

This year’s series of Drag Race UK has gained a global fanbase since its launch this January, with fellow international Drag Race stars and A-list celebrities showering their favourites with praise in the lead-up to the final.

Since landing in the bottom two in the first week, series two finalist Bimini has gone from strength to strength, securing four RuPeter badges and proving they are a force to be reckoned with when it comes to fashion, comedy, acting and more.

During a recent Zoom chat with Metro.co.uk and other press, Bimini opened up about the celebs who have been reaching out behind-the-scenes, having recently teased a future collab with Katie Price.

Joking that a couple of well-known rappers have been messaging them ‘all the time’, Bimini disclosed that the person they were most excited to hear from was Gimme Gimme Gimme star Kathy.

‘There’s been a few different people. Drake’s in my DMs all the time, I can’t get rid of him. Lil Wayne’s messaging me all the time… nah I’m joking,’ Bimini began. 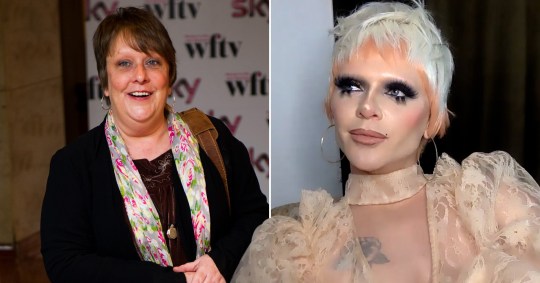 We are loving Kathy and Bimini’s friendship (Picture: Getty/BBC)

‘Kathy Burke, she’s the one for me that was like… it blew me away. And then she changed her Twitter name to Kathy Bimini Bon Burkey, which is iconic.’

Bimini added that model Cara Delevingne has also been in touch, and so they’ve ‘followed her back’ in response.

On 13 February, Kathy tweeted that she was backing Bimini ‘for the win’, describing the East London queen as a ‘superstar’.

KATH BON BURKEY! When I was growing up my mum would call me and my cousin Linda and Tom. I’ve loved everything you’ve done and your desert island discs is one of my faves. Absolute star and angel!! Thank you for the love @KathyBurke https://t.co/c83tbNxQIr

‘KATH BON BURKEY! When I was growing up my mum would call me and my cousin Linda and Tom,’ Bimini replied, referencing Kathy and James Dreyfus’ characters in sitcom Gimme Gimme Gimme.

‘I’ve loved everything you’ve done and your desert island discs is one of my faves. Absolute star and angel!! Thank you for the love @KathyBurke.’

Kathy responded: ‘Baby!!!! I’m welling up here. Your Mum has done a wonderful job. You are a magnificent darling and a creative superstar. I know how to say your name now!’