Dr Hilary Jones will be a guest speaker on the Queen Elizabeth this summer (Picture: Getty)

Dr Hilary Jones has defended the summer cruise he’ll be embarking on this summer amid criticism for his warnings against non-essential holidays.

The Good Morning Britain medical expert urged the public not to travel abroad unless absolutely necessary during the coronavirus pandemic, as concerns over the Indian variant mounts.

On Wednesday’s episode of the ITV breakfast show, Dr Hilary had an outburst of frustration over people booking holidays now that lockdown restrictions have eased, and even described them as ‘dangerous’.

Some then criticised the GP after it emerged he was booked on a cruise ship as a guest speaker in August. Organised by luxury cruise line company Cunard, Dr Hilary will be sailing around the British Isles on the Queen Elizabeth ship for a round-trip from Southampton spanning seven nights.

Defending the trip, Dr Hilary told Metro.co.uk in a statement: ‘I am not intending to go abroad this year and have publicly said so. I believe staycations are a safer and more sensible holiday alternative right now which also boost the domestic economy.

‘Later this year I am joining a domestic cruise in British waters which remains at sea throughout and does not call at any UK port let alone one abroad.  It leaves from Southampton and returns there without stopping.’

He then reiterated that it is a work trip as he will be giving talks about his upcoming novel, titled Frontline, which is dedicated to frontline personnel during the 1918 pandemic and NHS workers now.

‘Pleasant work of course but still work and a nice break for me after a year without one,’ he said.

The doctor added: ‘The safety precautions are stringent. All passengers are twice vaccinated and tested prior to departure.  All crew have adhered to stringent and rigorous Covid protocols and are tested.’

‘It will be one of the safest staycations I can conceive of and I would recommend it to anyone.’ 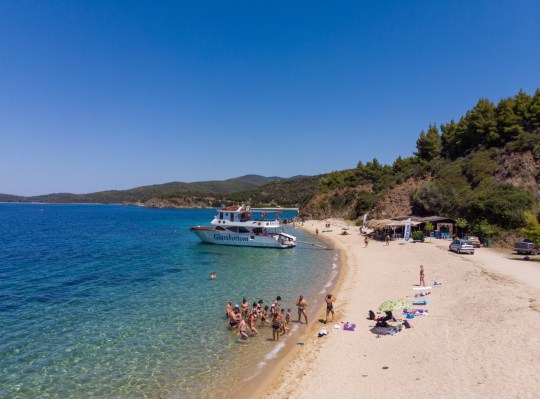 Holidaymakers are able to jet off to countries on the UK’s green list now that lockdown restrictions have eased (Picture: Nicolas Economou/NurPhoto/Shutterstock)

‘As a doctor I have to ask the question, is a holiday really important and essential in a global pandemic. It really isn’t. It’s a luxury. It’s something that you can do without in order to preserve life.’

Susanna Reid replied: ‘There’ll be a lot of NHS workers who feel like they deserve a holiday.’

Dr Hilary then said: ‘I have to admire the Australians. They said no travel for anybody until March of next year. That’s why they have no Covid there. That’s why they can go to concerts, go to cinemas, theatres, and enjoy a normal life becuase they’ve been strict. Because they’ve said, “That is what we’re going to do” and people say, “We accept that”.

‘Here, not only do we have confusing rules and regulations and guilt trip people, but people don’t know what’s the right thing to do. They’re not isolating. They’re not quarantining.’