Dr Hilary Jones winced and covered his ears as Alastair Campbell ‘treated’ Good Morning Britain viewers with a rendition of Three Lions today – on the bagpipes.

Susanna Reid previously confirmed Alastair would be returning to the news programme this week after sparking Ofcom complaints when he made his presenting debut in May and threw shade at previous host Richard Madeley.

After Richard had daily clashes with Dr Hilary Jones over Covid-19, former spin doctor Alastair was back on the morning show after England take one step closer to bringing it home.

Wednesday’s panel shared their excitement about England competing against Denmark during Euros 2020.

Alastair couldn’t stop talking about the game during the show and was eager to share his bagpipe skills in celebration.

‘Even though he’s a proud Scot, he’s going to get us in the mood for the match tonight,’ Susanna said.

She added with a grimace: ‘You’ve been practising hard, I can testify to that, there was quite a ding coming from the dressing room this morning.’

Alastair warned that Three Lions was a ‘really hard’ tune to play on the instrument.

Once the performance was over Susanna led with kindness, saying that he did a ‘very good’ job.

‘I sort of sang along eventually. Was there a bit of flower of Scotland?’ she questioned with a laugh. 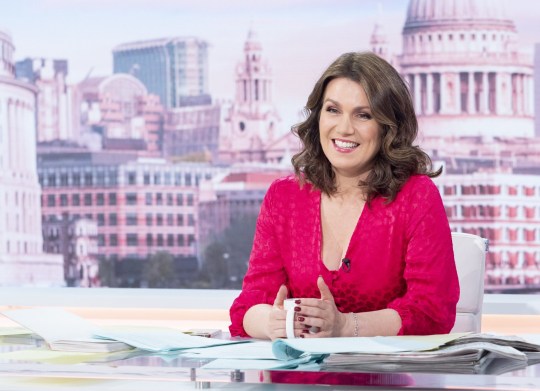 Susanna couldn’t hide her thoughts on the performance (Picture: ITV/Shutterstock)

‘There was a little bit, my dad will be turning in his grave, so bad,’ Alastair responded.

Susanna added with her tongue in cheek: ‘No, stunning talent.’

Eventually though, Susanna couldn’t help but share her true thoughts on the performance.

‘It sounded very good, it just didn’t sound like It’s Coming Home throughout the entire performance,’ she said.

Ranvir Singh joked that it sounded like it ‘was coming home eventually’.

Susanna added: ‘It’s meandering past a through alternative locations.’