Downton Abbey star Michelle Dockery has spilled the beans on the upcoming film, and we’re even more excited for the release.

Following the huge success of the period drama’s first spin-off film, a sequel will be hitting the cinemas next March, and this time the cast – including Joanne Froggatt, Hugh Bonneville, Maggie Smith and Imelda Staunton – will be causing chaos abroad on a trip to the south of France.

Michelle, who stars as Lady Mary, lifted the lid on what we can expect from their big screen adventure, and it sounds like they had a whale of a time.

Speaking to Metro.co.uk while taking part in the EE Bafta rising star jury ahead of next year’s awards, she told us: ‘It was brilliant. We’re like a big family so it’s always really fun going back, ad we had so much fun.

‘I’m really excited for audiences to see this next film.’

Teasing the aforementioned chaos, she continued: ‘Well, there is a trip to the south of France… So a lot of the characters are taken out of the environment that they’re used to.

Downton Abbey will be returning to the big screen soon (Picture: PA)

‘It’s really interesting to see the characters in another place. It’s a really fun film. That’s all I can tell you!’

Downton meets the south of France – What could possibly go wrong…?

The Godless actress star is also gearing up for the release of her next project, Anatomy of a Scandal, an adaptation of the novel by Sarah Vaughan.

Discussing her return to work during the pandemic, she explained how heartwarming it is to be on sets once again.

‘Last year, it was so uncertain with how our industry could continue. I think with it being such a difficult time, it’s actually made it, in many ways, more rewarding and meaningful,’ she said. 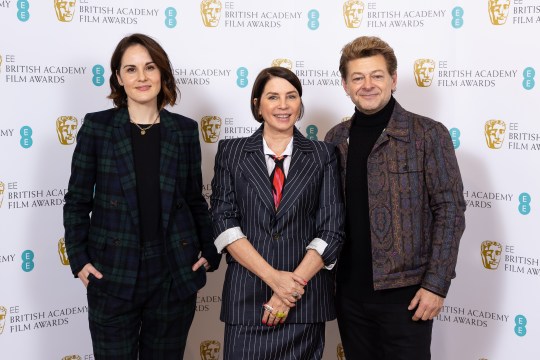 ‘I certainly felt that when I went back to work last autumn. I felt even more privileged to be doing what I do, and that we were able to continue doing it, with all of the Covid protocols in place.

Something else Michelle has been encouraged by is working on the EE Bafta rising star jury, to determine who could make the shortlist for the coveted gong – announced on February 1, 2022.

While the award is voted for by the public, it was up to the jury – made up of stars including Michelle, Andy Serkis and Sadie Frost – to whittle down the talent.

‘It’s been such a joy to watch all of the films and witness the talent that is out there, which is incredible,’ she added of the project. ‘I really feel like it’s on another level. So many of them dance and sing. It’s incredible, the talent.

‘I’m just honoured to be alongside such an impressive panel of jurors, it will be really interesting to get in the room and and hear everybody’s thoughts on the talent, and see where it takes us.

‘I think it’s going to be a difficult decision because the talent is so high.’

The EE rising star award shortlist will be announced on February 1, 2022, – at which point the public vote will open. The ceremony will take place on March 13, 2022.