Don’t Worry Darling – Olivia Wilde’s directorial outing – dropped its trailer this week and it’s fair to say it’s got us thinking a lot of thoughts – some wholesome, some a little less so.

In the psychological thriller, we’ve got Black Widow actress Florence Pugh leading the cast as Alice, with Harry Styles alongside her playing Jack, as they star as two citizens of a company town called Victory.

It’s a gorgeous little town, very pastel perfect, and everyone seems to be having a wow of a time – until Alice becomes worried that her husband Jack and his glamorous company might be hiding disturbing secrets *dun dun duuuuun*.

Director Olivia shared the exclusive promo of the upcoming film with audiences at CinemaCon in Las Vegas last week, and now fans have been treated to a first look, but we thought, you know what, let’s unpack this wonder scene by scene to really squeeze all the zesty juice we can.

The opening: A house party

The start of the trailer sees Harry’s Jack Chambers and Florence’s Alice at a house party alongside their chums, including Olivia’s character Mary (directing and acting, this woman is a powerhouse), as the women balance crystal tumblers on trays on their heads.

Oh what fun people had in the 50s, right? Bring back some good ol’ fashioned glass balancing shindigs, we say.

Alice and Jack then had a little boogie and looked all kinds of cosy before they decide to do some doughnuts in an open space, as you do.

We’d often warn against doing such a manoeuvre in your car anyway, however, Alice and Jack took this up a notch by having a pash while doing so, instead of concentrating on that turning circle, making this a double no-no in our books.

We suppose this is giving us real ‘these crazy kids are living their best lives, getting drunk, dancing, and getting about in their car without a care in the world’ vibes before the carpet is ripped from beneath us.

So, right on time, the fun little opening is done and the mood turns serious.

Jack and Alice in bed: ‘You and me’

We cut to a black screen and hear Florence’s voice saying ‘You and me,’ before we see her cuddling up to Jack in bed.

We…we don’t think…it’s going to be ‘you and me’…for much longer.

Chris Pine’s character Frank is then heard speaking about the wives in the film, declaring the men ‘ask a lot’, as we see the women farewell their husbands on the driveway before they each drive off in a straight line.

One of them – perhaps Alice? We’re going to say Alice – the prepares a succulent cut of steak, rubbing it in oils and spices that, frankly, makes us feel a little bit uncomfortable. 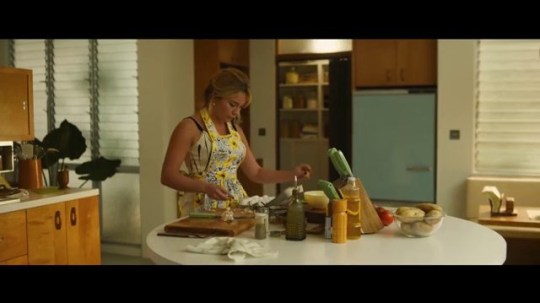 But that’s the whole point, right?

Alice vacuums and puts out the washing, smelling her husband’s clothes. Well, we hope it’s her husband’s, otherwise this movie is taking us on an interesting trip we didn’t pack a spare change of clothes for.

‘And discretion above all else’

Hinting at the secretive work the husbands do, we learn the wives are great with ‘discretion’, before we see Alice sharing a drink in a lobby with other wives, and an ominous rumbling shakes the furniture and their tipples.

An earthquake? Godzilla? No, ‘just the boys’. Lol.

Because we still have NFI what this film is about, Gemma Chan’s character Shelley introduces us to The Victory Project – whatever that is – which is proclaimed to be a ‘mission’ the characters believe in. They also live in a town called Victory and we’re going to assume that’s all linked, yeah? Yeah.

Yes, this is all starting to feel pretty darn culty.

Especially when Frank asks his guests ‘what are we doing?’

While we’d say, ‘enjoying a beer and a barbeque’ we would be wrong, because the answer is, obviously: ‘Changing the world.’

Alice becomes Side-Eye Chloe after the question of what the men are ‘really doing out there’ is brought up by a character who is clearly going to be instrumental to the mighty Midsommar-esque undoing of Florence Pugh.

The woman is intrigued, and so are we. This begins to feel a little Truman Show, as Alice gazes up at a plane which appears warped in the sky (or do we just need to go to Specsavers?), before, in another scene, she breaks an egg only to find it’s all shell and no yolk (side note, there’s a proverb in that somewhere…).

And this is where the trailer really gets interesting, to say the least, as Mary insists the women are asked to stay where they are, ‘where it’s safe’.

As Alice begins to ask WTF this Victory Project is (same, girl), first at a dinner party, and then again, getting all up on Jack’s nerves as he tells her to drop it, he then gives us one mighty moment of gusto as he yells for Alice to ‘STOP IT!’ 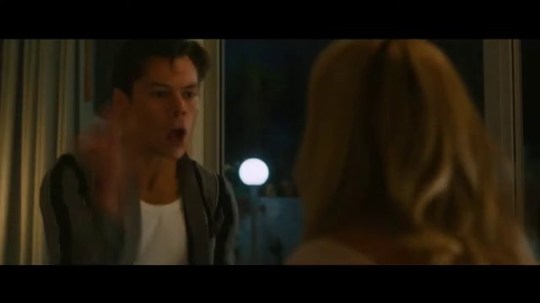 Sorry, we just need a moment.

And we’re back in the room.

It wouldn’t be a glorious thriller without a montage, backed by Alice’s voice telling the other wives ‘they’re lying to you about everything.’

And then we see Jack going down on Alice at the dining table, in what may be the most risque trailer moment we’ve ever witnessed in our little lives. 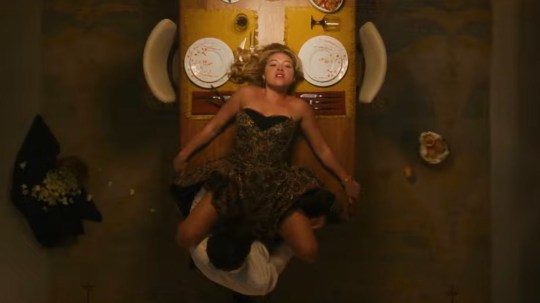 Right in front of our salad? (Picture: New Line Cinema)

Sorry, we just need another moment.

And we’re back in the room.

Are we going wild over this moment simply because it’s Harry Styles and Florence Pugh? Who’s to say, but the people are TALKING. And not just because it was right in front of our salad.

Sheesh, Harry wasn’t lying when he said we can’t watch this with our parents.

Frank, clearly a cunning linguist on a whole other level, says something about pushing forward and please don’t say the words ‘pushing forward’ after we’ve just witnessed that earlier scene.

Insisting she’s not crazy, Florence’s Alice is giving us power vibes as she attempts to break the system, while watching people break themselves in the process, like Kiki Layne’s character, who well and truly knows what’s up, with some mirror head-smashing going down. 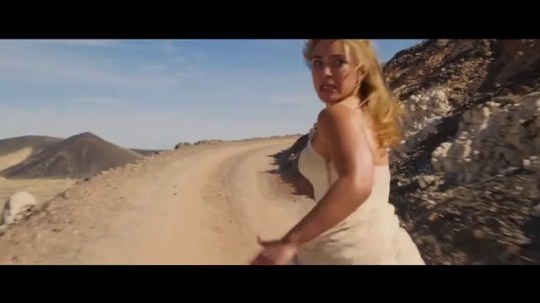 But then Harry, sorry, we mean, Jack, insists to Alice that their life together could be lost if she continues to be a bad bish and push the mean man Chris Pine’s buttons, as she declares ‘I don’t trust him,’ while Jack gets a little hysterical and screams in his fancy car.

Alice then declares she ‘doesn’t want to be here anymore’, as a series of moments depict her with her head wrapped in cling film, squashed between a glass screen and then in some sort of desert dome. We do not encourage two of out of three of those options there.

Ok, do we know what this film is about after all that? Yeah, not really.

Are we ruddy excited to watch it? Oh, you bet.