Don’t Look Up was a Netflix hit late last year, with the star-studded flick now being nominated for best picture at the Oscars.

The film, starring the likes of Leonardo DiCaprio and Jennifer Lawrence, followed two low-level astronomers who go on a giant media tour to warn mankind of an approaching comet that will destroy planet Earth.

The struggle? That no one is taking them seriously.

Despite the stark warning the film gave us, Mike Robinson, climate change expert and CEO of the Royal Scottish Geographical Society doesn’t think it’s going to have a huge impact on people’s mindsets.

‘I know a lot scientists who have celebrated the film because they can share that sense of frustration about not being listened to,’ he told Metro.co.uk.

‘Whether it necessarily changes anyone’s mindset is more difficult and I suspect it might not actually.

‘It’s a really good attempt to to talk about the frustration in climate change circles. The science has been pretty settled since 1979 but we’ve managed to go round in circles having a debate about whether it’s really happening.’

Leo and Jennifer star in the Netflix hit (Picture: AP)

‘My sense is that it’s much more important than just being right. The science itself isn’t enough,’ he added. ‘You do need to persuade people to take notice, pay attention, and treat it as a priority and that is a different proposition than necessarily what’s expressed in the film.

‘It is quite darkly funny, which I hope will appeal, it has a stellar cast, it’s actually been well done but some of its points are quite subtle and I’m not sure its points will land with everybody. And some people simply won’t watch it because it’s too dark and miserable. That’s not necessarily helpful.

‘In some cases, what we find now, are positive stories about what it would take to take some of the action [work better]. We need a bit more positivity about what’s possible.’

Robinson lauds DiCaprio’s efforts to draw attention to climate change and, while he thinks Don’t Look Up might not have a huge impact, he reckons his other films, including Before The Flood, have hit the mark a lot more. 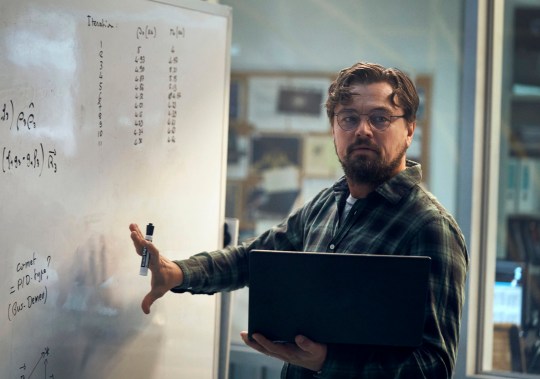 Leonardo DiCaprio ‘put his career on the line’ for his efforts to draw attention to climate change (Picture: AP)

‘He has effectively put his career on the line to stand up and speak out for something that really matters – I think that’s incredibly laudable,’ he said.

‘I would argue that [his films] are actually the best films out there, they’re quite rational, they’re quite thoughtful, there’s a lot of positivity in them.

‘This isn’t a flash in the pan for him – this is something he’s been absolutely connected to for 15, 20 years. I take my hat off to him.’

As for how effectively entertainment as a whole can tackle climate change, Robinson is hopeful.

‘There’s space for an awful lot of arts. I think the reason the science hasn’t been acted on more vigorously is all the people who can be persuaded by science have been persuaded…

‘But what we haven’t seen until fairly recently is the arts community engaged in this space and, where they have, often it’s largely dystopian. What we need to see are examples of things that are possible – what is practical? What can be done?’