The end of an era arrived last night, as the finale of Derry Girls aired on Channel 4, reducing fans to tears and stunning with a last-minute, incredible cameo.

Throughout its four-year run, Lisa McGee’s show has perfectly blended comedy with education, and the final episode was no exception as it shone a spotlight on the Good Friday Agreement.

The Good Friday Agreement was signed on April 10 1998 in Belfast, Northern Ireland, which helped to bring an end to the violence of the Troubles, a period of conflict that first began in the 1960s.

The agreement saw the formation of the Northern Ireland Assembly, while the agreement underpinned a commitment for ‘mutual respect, the civil rights and the religious liberties of everyone in the community’.

The last ever episode of Derry Girls, a special extended 45-minute instalment, was set during the signing of the Agreement, with viewers becoming emotional as they recalled what it was like to live through the monumental event in real life.

Others shared that they learnt so much more about the Agreement within a few minutes than they had when they were at school, with one person tweeting: ‘As a child of the 90s, #DerryGirls gave me more insight into the politics of Northern Ireland and the Good Friday Agreement than school ever did. And has motivated me to go away, learn more and understand better. All while making me laugh and cry. Incredible programme.’ 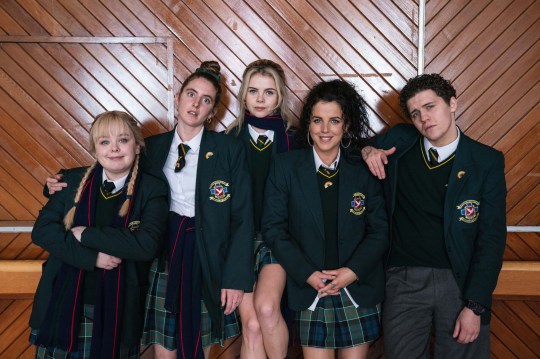 It was an emotional farewell to the Derry Girls gang (Picture: Peter Marley/Channel 4)

‘Sat with my (half Irish) boyfriend this evening & learnt more about the Good Friday Agreement in the finale of #DerryGirls than I learnt at school. Why is politics not on the curriculum below A-Level? Young ppl need to understand t/ historical context in which things are happening,’ someone else wrote.

Another stated: ‘I learned more about the Good Friday agreement in the five minute closing #DerryGirls montage than I learned in the entirety of my education in the UK, and that is literally not an exaggeration in the least.’

I am absolutely shattered watching the end of #DerryGirls Listening to the result of the Good Friday Agreement vote, still has me in tears. That was the day NI said enough was enough. We aren’t going back EVER!

I learned more about the Good Friday agreement in the five minute closing #DerryGirls montage than I learned in the entirety of my education in the UK, and that is literally not an exaggeration in the least

UK mainland folks – I urge you to do some research on why the Good Friday Agreement was so important, and why peace in Northern Ireland is still an issue today. #DerryGirls has shown beautifully why we canât go back to those dark times again.

Several people expressed their hope that the episode will educate others, with one writing: ‘Here’s hoping people outside NI watching #DerryGirls 1) Find out what the Good Friday Agreement was 2) Realise just how important it is and how we’d quite like to protect it, thanks.’

Referencing Liam Neeson’s character Chief Constable Byers, who first made a cameo on the series in the opening episode of season three, one person tweeted: ‘Liam Neeson with no words showed how important the Good Friday Agreement was and how it and peace must be protected at all costs. Rarely is an hour of television so perfect.’

Another remarked that in their opinion, the finale of Derry Girls was ‘the most powerful, moving piece of television’ they’d ever seen.

‘Pitch perfect in how it handled the Good Friday agreement, the soundtrack, the character development, a piece of art. I’m absolutely roaring. @LisaMMcGee you have truly made history,’ they said.

Following the release of the final episode, Lisa tweeted: ‘Thank you for watching. I’m quite emotional tonight so don’t have any words,’ while sharing a photo of her with Liam on set.

Derry Girls is available to watch on All 4.