Fans have been waiting for this moment!! (Picture: Channel 4)

In Tuesday’s instalment of the Channel 4 comedy, Sister Michael (Siobhán McSweeney) received a call that her aunt had sadly passed away, and she asks James, Erin, Michelle Mallon (Jamie-Lee O’Donnell), and Clare Devlin (Nicola Coughlan) to help clean the home before the funeral.

However, things took a scary turn when James gets run over by a stationery van (you have to see it to believe it).

The girls later dragged him back to the house, where he managed to regain consciousness, but his near-death experience resulted in him finally telling Erin how he feels about her. 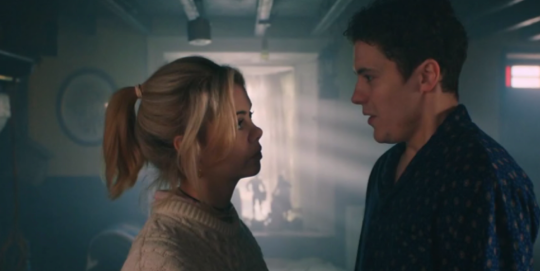 Alexa, play Kiss Me by Sixpence None The Richer (Picture: Channel 4)

‘You… I like you, Erin… I think you’re beautiful.’

A slightly shocked Erin later pulls James in for a kiss, with Kiss Me by Sixpence None The Richer playing in the background. Swoon!

Considering this was the moment fans have been waiting for since series two, the highly-anticipated scene sparked a big buzz online.

‘Never have i shouted finally as loudly as i did when james and erin FINALLY kissed #DerryGirls,’ one person wrote.

THAT EP WAS PERFECTION. AND THE KISS?!! I couldn’t stop laughing and really don’t want this to end ð­ #derrygirls

Another satisfied viewer added: ‘James & Erin finally kiss. I’ve been waiting for this moment, hopefully they can finally be together by the end of the series but I do understand what Michelle is saying, I’d love if by the end Michelle gives them her blessing.’

A third tweeted: ‘JAMES AND ERIN KISSING TO KISS ME… I AM DECEASED #DerryGirls.’

However, their picture-perfect moment was ruined by Michelle, who walked in on them kissing and listed all the reasons why the two shouldn’t date.

The episode concluded with Erin telling James that ‘Michelle’s right’ however James simply responded saying he’ll wait for her.

Meanwhile back in Derry, Mary, Sarah, Joe, and Gerry paid a visit to a psychic that turned out to be played by Games Of Thrones star Conleth Hill.

Derry Girls returns next Tuesday at 9pm on Channel 4.