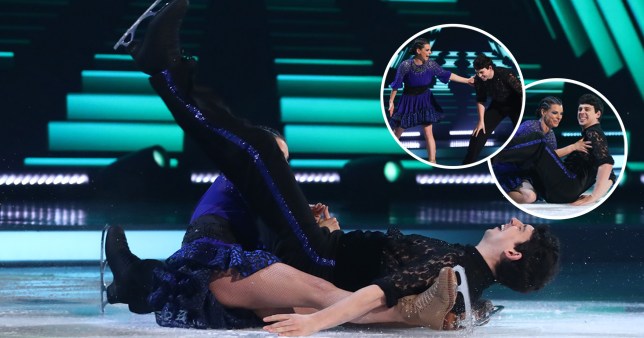 Comedian Matt Richardson suffered an unfortunate tumble when he returned to the ice for the Dancing On Ice 2021 final, joining several of the stars who backed out due to injury in a group dance.

Tonight, Sonny Jay, Faye Brookes and Colin Jackson went head-to-head in the Dancing On Ice final, with Sonny eventually being crowned the winner.

The final episode of the series saw the celebrities previously eliminated from the competition make a comeback, with several of them joining forces to take part in a group dance.

Matt was one of the substitutes on this year’s series, taking the place of Rufus Hound when the comedian tested positive for coronavirus.

Matt unfortunately only lasted one week, becoming the third person to be voted out by the judges alongside his partner Vicky Ogden.

But his bad luck didn’t end there, as during the final, when he finally had a chance to redeem himself, he toppled over Vicky on the ice – but still managed to maintain his composure as he got up and struck a pose.

‘Oh poor Matt,’ Holly commented while Phillip remarked: ‘Matt you had one job.’

While his fall may have not been planned, several Dancing On Ice viewers said that in their opinion, it was the ‘best’ part of the final.

‘Matt falling over was one of the most entertaining parts of this show,’ one person tweeted.

‘Matt falling over was the best thing about this final,’ another said, while someone else assured the broadcaster: ‘Matt we’re laughing with you not at you.’

Matt Richardson for the win, that fall was head & shoulders the best thing that’s happened in this series #DancingOnIce

Bless Matt, he literally only came in for one week then took an almighty tumble. Then again going by this series it was the only way to end things ð #dancingonice

In addition to Matt, other stars who competed on this year’s series of Dancing On Ice returned to the rink for the group number.

Ahead of the group dance, Phillip poked fun at the number of celebrities who had to drop out of the competition due to injuries, saying: ‘They are ready we are ready and after the luck we’ve had this season – these are ready as well,’ before grabbing a pair of crutches.

While Jason Donovan was among the stars who took part in the routine, having quit the show after suffering a back injury, fellow injured celebs Denise Van Outen and Myleene Klass had to sit it out.

Myleene, who became the first celebrity to leave the competition, explained that she tore her meniscus during her time on the show.

‘During the process I tore a meniscus, which basically means my cartilage is damaged, so you broke my knee,’ Myleene joked, adding: ‘I’m safely rink side tonight.’

Rufus, Billie Faiers and Rebekah Vardy all took to the ice once more for the routine.

Dancing On Ice is available to watch on ITV Player.