Brendan and Vanessa nabbed a 40 like the other competitors (Picture: Rex/ITV)

Dancing On Ice fans vented their frustrations during the grand final after Brendan Cole and Vanessa Bauer were awarded a ‘farcical’ perfect mark despite a tiny slip during their routine.

The competition reached its conclusion on Sunday night with Brendan competing against Kimberly Wyatt and Regan Gascoigne to be crowned the 2022 champion.

For the first routine of the evening from each couple, the duos took to the ice with dances choreographed by judges and skating legends Jayne Torvill and Christopher Dean.

All three of the couples achieved straight tens across the board from Jayne, Christopher, Ashley Banjo and Oti Mabuse, adding up to the perfect score of 40.

Brendan and Vanessa’s routine was based around a night at the opera, performing to the music of Bizet’s Carmen and shaped to reflect the 45-year-old’s career as a professional ballroom dancer.

However, despite its dramatic moves and confident execution, complete with the help of a troupe of backing skaters, viewers spotted a very small fumble when Vanessa was flipped over in the air between the pros and Brendan. 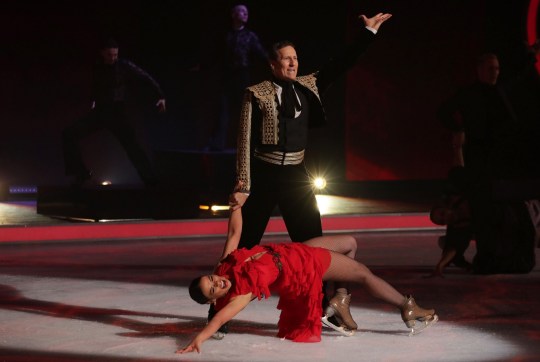 Brendan and Vanessa skated to music from the opera Carmen (Picture: Matt Frost/ITV/Rex/Shutterstock)

The train of her red dress seemed to get slightly in the way, but Brendan was there ready to catch her and continue the routine without a hitch.

‘How can Brendan get a full bank of 10’s when he clearly made a mistake???,’ asked one viewer on social media.

Reganâs first routine put a massive smile on in my heart. Kimberleyâs bought tears to my eyes. Brendanâs was meh, stumbled a few times and still got 40?! #DancingOnIce

brendan should have got 9s.. he stumbled #DancingOnIce

Scores are farcical. Brendan stumbles yet still gets a 10. Judges pandering to him ð¤¬ #DancingOnIce

#DancingOnIce letâs be serious Brendan went wrong. Letâs not spoil the professionalism, if someone goes wrong theyâre not a10!!!!

Not fair to give 10s to Brendan, he had a stumble, wobbled and almost fell…
Reegan and Kimberly didnt make any mistakes….
Shouldve been 9.5s!#DancingOnIce #brendan

#DancingOnIce Really 40 for Brendan!! Are the judges watching the same thing I am? Two obvious mistakes. I’d have deducted at least half a point for each mistake/stumble.

How can Brendan get a full bank of 10âs when he clearly made a mistake??? #dancingonice

Another tweeted: ‘Really 40 for Brendan!! Are the judges watching the same thing I am? Two obvious mistakes. I’d have deducted at least half a point for each mistake/stumble.’

‘Should’ve been 9.5s!’ complained one fan, while another accused the judges of ‘pandering to him’ and called the scores ‘farcical’.

Some were keen to defend Brendan though, as well as his marks.

‘Nah the judges are giving 10s because th don’t want to seem unfair on the final because he stumbled it wasn’t a 10 I mean 9 or 9.5,’ reasoned one viewer.

The praise from the judges was unanimous, and when co-host Holly Willoughby mentioned the small slip, Christopher Dean laid the blame at the door of the ‘boys’, meaning the pro skaters, rather than Brendan, which he jokingly agreed with.

Nah the judges are giving 10s because they know their scores donât count and donât want to seem unfair on the final because he stumbled it wasnât a 10 I mean 9 or9.5 and I like Brendan #DancingOnIce

He added: ‘From the bad boy of ballroom to the mighty masterful matador. I think it was a part was made for you, you brought it to life.’

After each couple performed their favourite dance from the competition so far, the public vote saw Kimberly Wyatt and Mark Hanretty knocked out, with Brendan and Regan going on to perform their takes on the Bolero.

The Dancing on Ice final is tonight from 7pm on ITV.