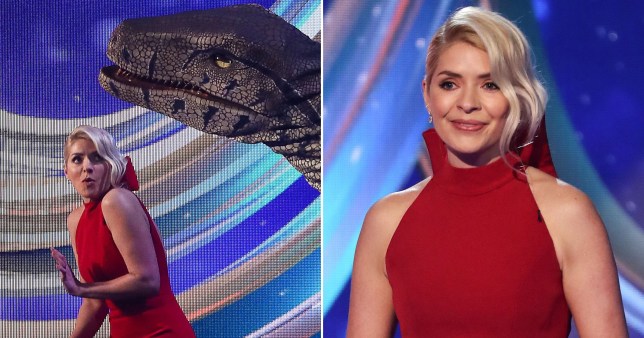 Dancing on Ice nearly had another accident to add to its long list during Sunday’s show – after Holly Willoughby almost fell victim to a wild dinosaur walking around the set.

The presenter was delivering a link to camera when she was ‘attacked’ by someone in a convincing dinosaur suit during a memorable moment.

Holly wasn’t best pleased after being disturbed by the side of the ice rink, shouting: ‘I don’t like it!’

As she struggled to compose herself, the 40-year-old added: ‘Just back off!’

Why was there a dinosaur walking around the Dancing on Ice set, you might ask? There were a number of the enormous creatures taking part in Lady Leshurr’s routine inspired by the movie Jurassic Park.

Holly might not have seen the funny side, but her co-presenter Phillip Schofield was left in hysterics by the incident, struggling to contain himself with laughter.

‘Forget the ice dancing, [Holly] freaking out at the dinosaur was the highlight of the show!’ one said.

‘Holly and that dinosaur has made this whole series worth it,’ another said.

Oh Poor Holly, they are trying to Finish the show. And she gets Attacked by a dinosaur. And inside Phil helping. He is in laughing ððð

Meanwhile, Dancing on Ice said goodbye to another celebrity on Sunday night, after Rebekah Vardy left the competition during Movie Week.

The I’m A Celebrity… Get Me Out Of Here star and her professional partner Andy Buchanan found themselves in the bottom two with Lady Leshurr during the most recent episode.

Meanwhile, it was recently announced that the series has been cut short following the multiple dropouts and injuries.

A rep for ITV said: ‘ITV has taken the decision to move the final of Dancing on Ice forward by one week. The competition’s final will now take place on Sunday 14th March.’

It comes after the likes of Denise Van Outen, Billy Shepherd, Hamish Gaman and Yebin Mok all left the show due to injury.

Dancing On Ice continues on Sunday at 6pm on ITV.